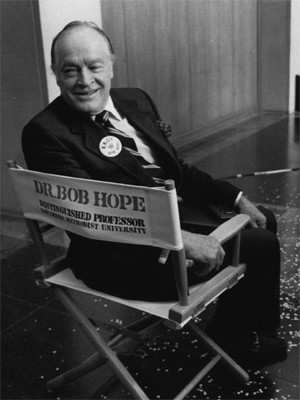 On Sunday, July 27, Bob Hope died of pneumonia at age 100 in hisCalifornia home. With his passing, the world lost one of thegreatest comedians it has ever known. His career spanned almost tendecades.

Hope’s relationship with SMU dates back to the1920’s when he was performing a vaudeville act atDallas’s Majestic Theatre. It was then that the youngperformer met theatre chain executive and SMU supporter, BobO’Donnell. From the friendship between the two men were bornother lasting alliances between Hope and SMU administrators,faculty and staff.

An avid SMU sports fan, Hope had an early closeness to theMustang football team. When the team traveled to the 1935 RoseBowl, he invited them to visit him at Paramount Studios duringtheir stay.

Several years later, before the 1949 SMU-Notre Dame footballgame, Hope was “kidnapped” from a Fort Worthperformance by a group of students and taken to a massive pep rallyin downtown Dallas. Amused, Hope only joked that an atheist wassomeone who didn’t care who won when SMU played NotreDame.

In the early 1950s, Hope began performing on various U.S.campuses. Selling out quickly, his performances at SMU were alwaysa huge success. He was even the first person ever to arrive at SMUin a helicopter.

However, his performances at SMU were only the beginning. Hopewas the first man ever to be made an honorary member of the SMUsororities. He was given the Red Stallion Award from the athleticdepartment, crowned “Homecoming King” in 1968, grantedan honorary Doctor of Humane Letters degree, and presented with anhonorary membership in the SMU Alumni Association. Hope also servedon SMU’s Board of Trustees from 1968 to 1976.

It was in 1968, however, that Hope’s greatest gift wasmade to SMU—the Bob Hope Theatre. The theatre was opened withHope’s generous donation totaling over $800,000. Openingnight looked much like a Hollywood movie premier with celebritiesand Dallas elite in attendance.

Today, the theatre is an integral part of the MeadowsSchool.

“The theatre is the centerpiece of what we do here,”said Greg Brown, managing director of the Meadows School.”It’s one of our premiere performing spaces that we useall the time.”

“Mr. Hope has done several performances at SMU, but‘Roberta’ was special because it was done on his stageand also because it was the kickoff for the Bob Hope Scholarshipwhich we still award today,” Brown said.

Over and above monetary gifts to SMU, he also gave his time andtalent freely. In 1984, he served as a visiting professor to acourse taught by professor G. William Jones entitled “BobHope: On the Art of Cinema Comedy.”

“The students loved it, and Mr. Hope really liked workingwith students. Despite his age, he really had a lot of energy ,andI think he liked working with young people because it kept hisenergy up,” he said.

As a result of his teaching, Hope was named a distinguishedvisiting professor for life.

Bob Hope’s last visit to the SMU campus was in 1992 for ablack-tie gala where he was awarded the Medal of Distinction forboth lifetime achievement in entertainment and for his generouscontributions to the Meadows School.

“I’m proud of all my awards, but let’s faceit, this one is sort of special,” Hope said in an interviewwith The Dallas Morning News.

Greg Brown helped produce the tribute to Mr. Hope at the galathat evening and remembered the experience fondly.

“It was amazing to be around a legend. He was 90 years oldwhen I met him and he was still very quick-witted,” Brownsaid. “What I took away from the evening was that he was somoved by it. He always came prepared with a script to everyoccasion, but he didn’t use his script that night…hereally spoke from the heart.”

A name synonymous with comedy, Hope will continue to lighten thehearts of many in the future.

“Because of the breadth of his career,” Brown said,”he’s touched people in every medium. The number ofpeople he’s been able to touch is something few will be ableto surpass.”

His memory stands embodied at SMU in the theatre that bears hisname.

“When we think of Bob Hope, we can’t help butsmile,” Brown said.