SMU named No. 1 in nightlife by Playboy Magazine 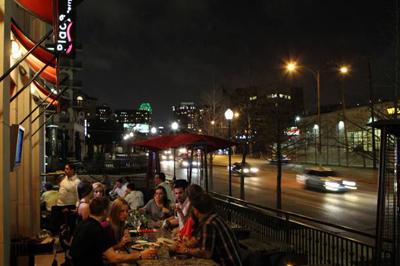 Dallas has the highest per capita restaurant average in the nation. (AP)

SMU’s outstanding academic reputation is being joined by another honor. Playboy Magazine crowned the university No. 1 for Nightlife in its annual “Top 10 Party Schools” list.

“The SMU area has so many places that anyone 18 and older can go to to have fun. If one place is having an off night you can just walk across the street and check another place out,” Stroll said.

SMU’s home in Dallas is part of the reason the magazine put the university in first place. The city offers multiple unique locations for dining, clubbing, dancing and live entertainment. Playboy noted there is something for everyone to do in Dallas and SMU students fully take advantage of the opportunities.
“Dallas is SMU’s never-ending house party,” Playboy said in the article announcment.

“It’s the perfect combination of being sophisticated, but still laid back.”

SMU junior Mallorie Holguin said she thinks the student body should not be embarrassed about the ranking.

“I think that this should be shown as a positive attribute of the school because it shows that our students are not only working hard academically, but they are also involved socially,” Holguin said.

Stoll agreed that the recognition is a positive.

Although SMU did not make PlayBoy’s official “Top 10 Party Schools” list, the victory in nightlife proves the university is competitive in any area.

“I definitely do not think it shines a negative light on SMU,” Stoll said. “It gets the SMU name out there – any press is good press.”

Texas schools that made the party list included The University of Texas and Texas Christian University.

If SMU continues to study hard and party hard, by next year, all these rankings could be different.

With the city of Dallas offering a great night life, SMU has the potential to be named the no. 1 party school in the nation – an award usually held for large state schools.

Posted on October 7th, 2012 by Demi Stanley
ShareTweetShare on Google+Pin on PinterestSend with WhatsApp
4 recommended

A Diverse Center for a Diverse Neighborhood

The Northwest Community Center located in Vickery Meadow provides resources to the predominant refugee community in the neighborhood and partners with non-profits to offer their services as well. END_OF_DOCUMENT_TOKEN_TO_BE_REPLACED