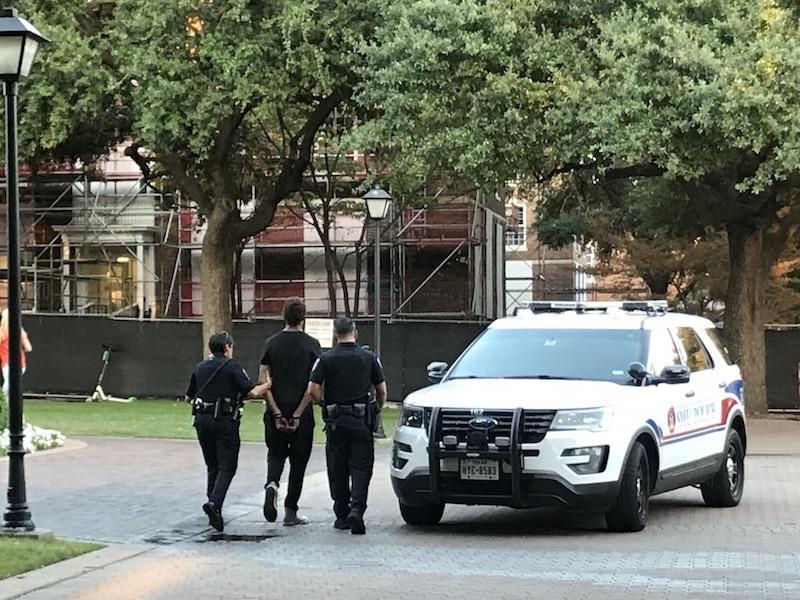 The Southern Methodist University Police Department arrested two black men at around 6:30 p.m. on Thursday. According to official communications on behalf of the SMU Police Department, a call was placed at 6:16 p.m. stating that two men had approached students attempting to sell them prescription drugs.

The SMU police identified two men that matched the description near the flag pole in front of Dallas Hall Lawn. According to SMU PD, both men gave fake names upon initial questioning, and SMU PD arrested and searched them.

“Did you see how he was doin’ me? That shit hurt,” One of the men could be heard saying as two police officers questioned him. The officers had both suspects seated on the ground for several minutes as witness walked by. One was SMU student Brinn Bailey, who is President of the Association of Black Students.

“They had both of them on the ground questioning them,” Bailey observed.

By 7:00 p.m., the officers had finished on the scene and transported both suspects away in SMU police cars.

During the officers’ investigation, it was discovered that one of the suspects had eight warrants for his arrest in Dallas County. The other was charged with criminal trespassing on the SMU campus. Both men were later transferred to the Dallas Police Department after being processed by the SMU Police Department.