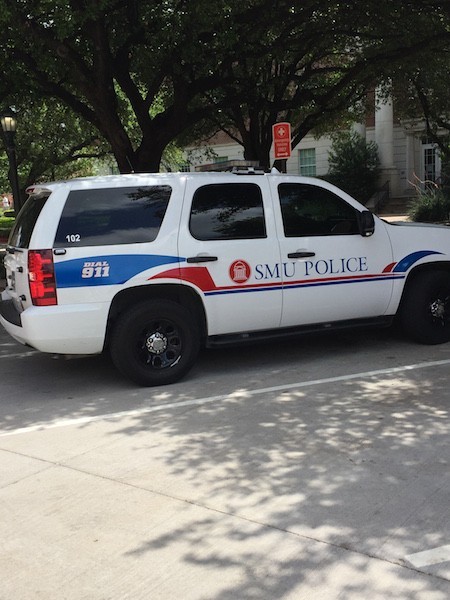 A bait bike is a bike with a hidden tracking device on it, used by law enforcement to track thieves. Police planted the locked bikes throughout campus, and if the bike moved, an alert was sent to police with its GPS location. Police then tracked the bike, which led them to the criminal.

Sophomore Stratton Grady now walks to class after being a victim of a bike theft last year. Grady said he was shocked to find his locked bike missing from outside Mac’s Place.

When the police arrived, he was also surprised to learn there was very little the officers could do to recover the bike since no security cameras covered the bike rack.

SMU police decided to take a more proactive approach to solving the problem this school year.

“We are going to try and stop the theft as it’s happening,” Jemmott said. “And using tools like these bait bikes to deter it from happening.”

Since SMU police started the bait bike program in early September, two of the bikes have already served their purpose.

“The ones that we caught were during football games,” Jemmott said. “The thieves figured it was a good time, because people are busy with the game.”

SMU police tracked down the thieves using the bait bikes’ locations. Both criminals arrested were non-students who came to campus with the intention of stealing and pawning bikes.

No student bikes have been reported stolen since the bait bikes were introduced.

The number of alcohol violations reported by SMU police has almost doubled compared to this time last year, according to SMU’s campus crime log.

SMU police Chief Richard Shafer wrote in an email that alcohol violations vary from month to month and from year to year.

“While there were more reports this September than the same time last year, other months rise and fall from year to year as well, which makes monthly comparisons difficult,” Shafer wrote.

One of the new hires, Valerie Garcia is a recent graduate from the Law Enforcement Academy at Cedar Valley College. The other new officer, Roxie Vigil, comes to SMU after serving for the San Diego police department.

“They bring a lot of diversity, experience and knowledge to the department,” Jemmott said.