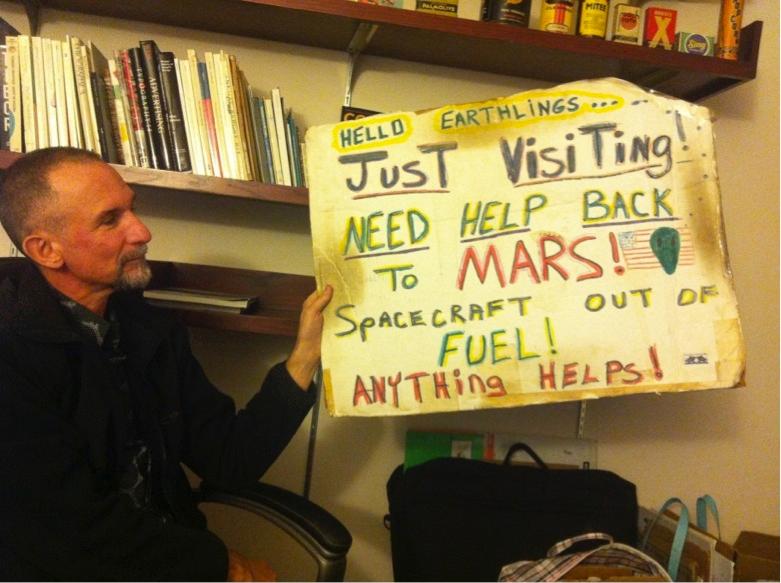 When you see someone on the street corner holding a sign, dressed in ragged clothes, holding a cardboard sign, what do you do? Some people might casually read the sign, roll down their car window and give the person a dollar. Others keep their eyes straight ahead and avoid, at all costs, making eye contact with the person standing next to their cars.

But for Willie Baronet, it’s an opportunity to expand an ongoing art project. He “digs the things people say,” and is “fascinated by the materials people use” on their signs, he said.

Walking into his office in the Umphrey Lee building at SMU, anyone can see the pride he has in this collection. This ongoing project covers his walls, and what can’t fit there gets put in bags next to his desk.

Baronet is a SMU creative advertising professor. He has been buying and collecting homeless person’s signs since 1993. As part of a personal battle to beat a discomfort with encounter with homeless people, Baronet has eventually found a home-like comfort in what has now become an ongoing art project.

While driving, if Baronet sees a homeless person on the side of the road, he will offer to buy his or her sign, letting them name their price. In return, he will also replenish them with a blank cardboard slate and a marker to create a new advertisement.

He has paid between $4 and $25 for each given sign, and estimates that he has spent well over $4,000 for his collection of roughly 400 signs. Thinking about the money he’s spent on this endeavor, he gasps and jokes that perhaps he will end up homeless from buying too many signs from the homeless, but Baronet says he can’t stop collecting, and that he probably never will.

Much like many other Dallasites, Baronet says he used to get very uncomfortable when he saw a homeless person on the side of the road. He would avoid eye contact and drive away when the light turned green. SMU student Traci Penn is like this, and says that homeless people make her extremely awkward.

“It took me longer to start to notice the shift that was happening in me,” he said now, the more he’s interacted with people and the more signs he’s collected, he has had so many interesting conversations with these people, and heard so many great stories. “The longer I did this, the more comfortable I got. I’d shake hands with them, I had the conversations, I realized I was no longer afraid to talk to the people on the street,” Baronet shared in a TEDxSMU talk, “And the biggest shift that happened inside me was that I realized it wasn’t them and me, it was just us.”

It’s a difficult concept to grasp: “Why would he think to do something like that?,” say some of Baronet’s advertising students including Danielle Olson, “It’s so bizarre. I can’t believe he doesn’t clean them.”

Some people are perplexed when he asks to buy their signs. When they learn that it’s for an art project, most people get excited, he says, and others get so emotional that they start to cry. About five people have refused to sell their signs to Baronet, which he suspects is for religious reasons. Baronet has videotaped and saved recordings of 70-75 of these interactions. He tells all of his friends around the country that if they buy a sign and send it to him, he will reimburse them for the sign and the postage.

Home life as a child does not bring pleasant memories to Baronet as an adult. It was difficult for him to define what “home” meant: He asked himself, when reflecting back on his life, “Is there some part of me that was homeless, that part of me was scared, and that yearned for safety?” Those are things that he didn’t find at home, but began to understand as he learned more about himself and his discomforts, he said.

But it’s not just about the collection and the stories he hears. He began a three-time recurring event called “We are all homeless,” where 30-40 people, mostly friends of his, gathered on the roadside holding homeless signs. They gave business cards to people directing them to a website called weareallhomeless.org. Because drivers can’t ignore a large group of people on the roadside, this was an initiative to raise awareness about homeless people, and actively get people to think about how they act toward homeless people on the side of the road.

Not only are there hundreds of cardboard signs pinned to his walls, but there are several other collections showcased behind his office chair. Collections of Simpsons bobble heads, vintage bottles and cans, postcards, stickers, matchbooks, and obviously homeless signs have high priorities in his creative life, and have inspired him in his artistic endeavors.  “I have a serious collecting problem,” he says, “If you think this is bad, you should see my art studio!”

He says he will collect “anything that relates to packaging, graphic design or advertising.” These signs are certainly a form of advertising, which Baronet has spent so much of his life doing. There’s no way anyone can get away from advertising. This could be a perfect explanation for why he teaches advertising and creativity to college students, on top of the fact that he just loves teaching.

Teaching creativity is not something that people ordinarily think can be done. However, Baronet sees the empathy he gives to his students because he knows “what it’s like when someone tells you [your work] sucks,” he says, “it’s really fun to watch light bulbs go off for people, and watching them get excited about their own creativity.”

This art project may very well continue through the rest of Baronet’s life because, he says, “I never get bored with signs, how each sign is individual.”