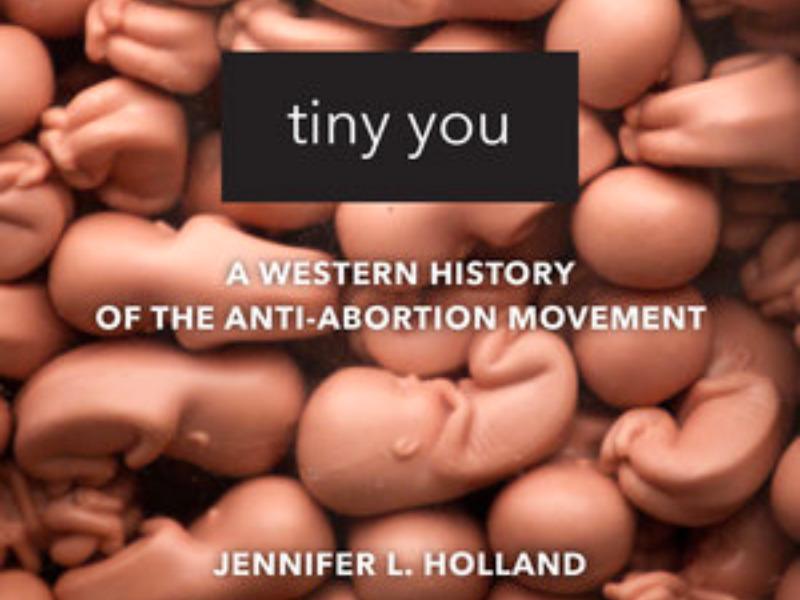 The 2020 David J. Weber Prize for the Best Non-fiction Book on Southwestern America will be presented to Jennifer L. Holland on Thursday, February 17 at 6 p.m. in The Texana Room at Fondren Library.

This annual award was first presented in 1999 and is administered by the Western History Association (WHA). Although the award was first titled the William P. Clements Prize, it was recently renamed in honor of the Clements Center’s Founding Director and past WHA President David J. Weber. The competition is open to non-fiction books with original research over any aspect of the American Southwest.

Holland’s winning book is titled Tiny You: A Western History of the Anti-Abortion Movement, which the judging committee referred to as a “smart, readable, and fascinating exploration of how politics, religion, and whiteness converged to make abortion the overriding issue in the post-Goldwater Republican Party and the Intermountain West.”

Holland says the book is not about the formation of anti-abortion laws or the debates between activists of different beliefs, but more about how these ideas are taken into “intimate and everyday spaces of people’s lives.”

“It’s really about anti-abortion political culture and how anti-abortion activists create the ideas that they do, and especially the ways in which they borrow or co-opt leftist rhetoric around civil rights and genocide and make their movement into a rights movement,” Holland said.

“I’m trained as a Western historian and I think so often Western places get left out of these kinds of conversations about modern politics unless they hit on certain things that seem Western.” Holland said, “When people think about feminism and anti-feminism and women’s issues and gender, they just don’t think about the West.”

In conducting research for her book, Holland wanted to take “a very white movement” like anti-abortion and examine how it works in a multiracial place.

“I wanted to see in a place like Albuquerque, do Catholic, ethnic Mexican people join this movement? Do black evangelicals join this movement in Denver? And what I found was no they don’t,” Holland said. “That really helped me think through a lot of the racial politics of the movement and what they were saying versus what was happening.”

In college, Holland was a reproductive justice activist, while her best friends were pro-life. She believes that this experience might have formed her interest in researching different cultural aspects of abortion and anti-abortion.

One of Holland’s friends who grew up Catholic saw The Silent Scream, an anti-abortion film, in Sunday school. Holland recalls it making a big impression on her friend and completely shaping her worldview.

“It was like the thing she could never change her mind on because she had seen this film,” Holland said. “That really captivated me and that’s what really formed the project.”

Holland worked on the volume for about a decade, as it was her Ph.D. dissertation before she fleshed it out into a fully developed book.

“The interviews were sort of hard to navigate,” Holland said. “These interpersonal relationships with people I really disagreed with and their assumptions they made about me, no matter how transparent I was about who I was and what I was doing there. It was just hard emotionally, sometimes, to do that work.”

Holland is an assistant professor of U.S. history at the University of Oklahoma, with specialties in histories of gender, sexuality, and race in the 20th century North American West.

Seating at the event is limited due to COVID and social distancing requirements. Email swcenter@smu.edu to register and reserve a seat.