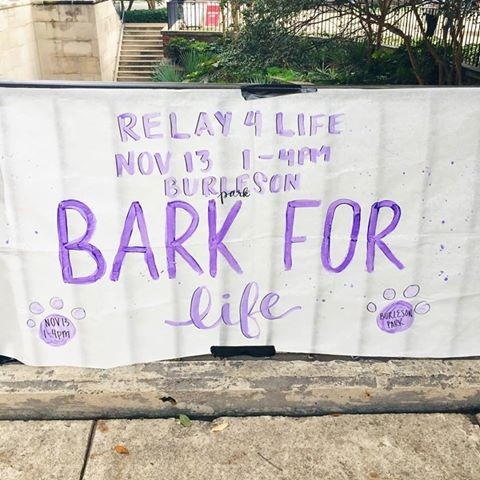 Pooches played in the park to help raise funds for cancer research and for those battling cancer. Dallas dogs of all breeds and their owners came out to support SMU’s first Bark for Life on Sunday afternoon at Burleson Park.

“My favorite dog was Dallas’ famous Golden Doodle, Nelson, because he rode to the event in the sidecar of a Vespa with sunglasses on,” student Kendall Hay said.

Pups enjoyed an afternoon full of contests, games and fun. Many people in the community came out to pet the furry friends in pursuit to raise awareness about canine cancer and to donate to the American Cancer Society’s fight against cancer.

Atticus the Rottweiler won the bobbing for hotdogs contest and participated in the trick contest by playing dead.

Atticus’ owner, Joy Matthiesen, got involved in Relay for Life through her aunt in Pennsylvania. She also supports the cause because Atticus recently lost his sister to osteosarcoma, a bone tumor commonly found in large dogs.

“If we can raise research funds for both humans and canines, that would be amazing,” Matthiesen said.

The director of communications chair for Relay for Life, Emma Clayton, helped plan Bark for Life. This organization has been close to her heart since high school.

“I feel like so many people are affected by cancer. It’s important to make sure the right treatment can be possible for cancer patients,” Clayton said. “Everyone you know knows someone who has or has had cancer.”

The entry fee for students and people who just wanted to pet the dogs was $10, and for dog owners it cost $25, which came with a t-shirt and a purple dog bandana.

A good amount of dogs came and went as the event took place. With no more than 15 dogs at Burleson Park at a time, Bark for Life raised about $1,000 that will go toward the Relay for Life event in the spring.

Hay, an education and psychology major at SMU, showed off her Maltese pup at the event. Hay became a part of the Relay for Life committee this year.

“I joined because my grandfather was diagnosed with cancer, and I thought I would join to show my support for him through this philanthropy,” Hay said.

Bark for Life succeeded in raising money for a cause that will help many sick people get the treatment they need.

Look out for more fundraisers leading up to SMU’s Relay for Life event on April 21, 2017.