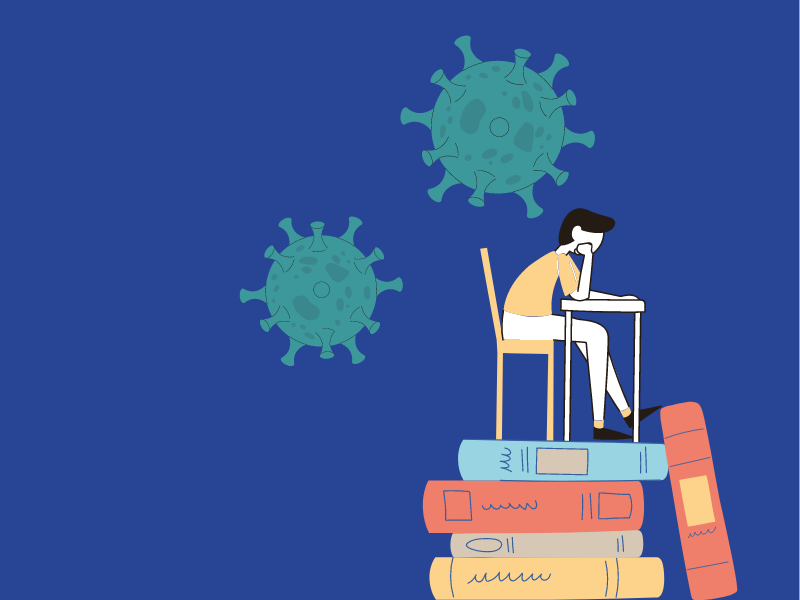 As a resident assistant (RA), even a normal year can be challenging. RAs juggle a multitude of expectations as both college students and university employees.

They must balance being a peer and an authority figure, befriending and supporting their residents while holding them accountable to university policies. They’re also model students, involved on campus and work multiple hours a week serving their communities.

Their role at Southern Methodist University (SMU) is extensive, and the COVID-19 pandemic has added even more to their plates. In a 2021 Washington Post article, Valronica Scales, director of resident life at the University of Maryland at College Park, said that RAs are the first responders when it comes to masks and other COVID-19 policies.

“When we think of front-line workers, we think of housekeepers, maintenance workers, dining staff,” Scales said. “Oftentimes, those that are forgotten are RAs.”

According to a study by The Journal of College and University Student Housing, this lopsided work-life balance can be dangerous. The study said that residence life employees must create boundaries or use other coping strategies to maintain healthy lives.

Three SMU RAs shared their experiences navigating this past year as a student, university employee and peer with The Daily Campus.

Wade Glover became an RA because he wanted to build community and be there for others. However, the sophomore’S first year as an RA was not what he planned. Like many SMU students, he spent a lot of time in his room for class, meetings and other aspects of student life. On top of that, he was spending nights on call and attending staff meetings in his room.

While Glover admitted that being confined to the same four walls could be isolating, he said that the Residence Life and Student Housing (RLSH) team in MHPS was there for him every step of the way.

“It’s definitely been interesting because it’s not what I signed up for,” Glover said. “It was a little weird coming back to our supervisors saying ‘Okay, your role is going to be mostly enforcement because we can’t have, for the most part, large scale events.’”

Glover and other RAs were most heavily tasked with enforcing the university’s mask policy and guest policy, which were both implemented in response to the pandemic.

However, on March 15, 2021, university policy began to shift back towards pre-pandemic normalcy. Masks were still enforced, but residents could once again invite guests to their buildings as long as both parties obeyed the university’s and building’s policies.

“I actually texted my residents and said, ‘If you do bring a guest on our floor, introduce me,’” Glover said. “Obviously there’s still an emphasis on safety, but this is the light at the end of the tunnel.”

This light encouraged Glover to apply for and accept the RA position next year in hopes of experiencing a year of a more normal RA experience.

As a second-year RA, Nabiha Yousuf had experience creating programs for her hall, handling floor meetings and other RA tasks. However, the SMU junior had to get more creative once the pandemic hit.

In a normal semester, Yousuf hesitated to give out her phone number to residents. Now, she feels like the technological connection bonds her closer with her residents.

“I text my residents a lot, they’ll FaceTime me if they have questions or want to talk,” Yousuf said. “They can see me as a friend in that way, which is really cool.”

Creating friendships is her favorite part of the job Yousuf said. However, this desire also made it difficult for her to balance being both a peer and an authority figure.

“I tell my residents that writing incident reports is the part of my job that I dislike the most,” Yousuf said. “I do my best to be a friend before being a disciplinarian, unless there is something for me to discipline.”

For her and her family’s sake, Yousuf had to be a disciplinarian this year. She and her family are immunocompromised, and she makes the 25-minute drive to see her parents on a regular basis.

The pandemic also forced Yousuf to be more conscious about her mental health.

Like many RAs during the pandemic, she slept, studied and worked in the same living space. To create a better work-life balance, Yousuf gave each area in her room a specific function: she only did homework at her desk, and her bed was exclusively for sleeping.

Yousuf looks forward to building upon her personal growth as a RA next year, which she hopes will allow her to to see more people in-person.

In addition to being an RA, Zac Scornavacco is heavily involved with a number of campus organizations. When the COVID-19 pandemic and SMU went virtual, so did most of the SMU senior’s free time.

“First semester was really hard because I was taking a pretty heavy workload. I would find myself in my room for ten hours straight,” Scornavacco said. “I was like, ‘Woah! Am I going to be able to do this for a whole year?’”

Luckily, Scornavacco was able to do it. He took fewer classes this semester, and spent much of his free time trying to encourage his residents to attend virtual events.

“The buildings are doing so much on their end to the capacity they can,” Scornavacco said. “However, there is a lot of ability for residents to stay in a comfort zone if there isn’t a pressure to attend in person.”

Scornavacco has had to learn which residents would welcome the social interaction and which would shy away. Some of his residents were more concerned about the pandemic than others, so Scornavacco adapted his approach to each resident in order to balance safety, comfort levels and need for connection.

In fact, Scornavacco said that the ability to adapt is the biggest thing he’ll take away from this experience.

Scornavacco said that this level of expectation was difficult for him to balance, especially when it came to being a policy enforcer. He hopes that next year’s RAs will have more normalcy, but he advises them to always be on their toes.

“Hopefully things will look different, but you always have to be ready for the unknown,” Scornavacco said. “This year, things are changing on a daily basis.”