From sensitivity training to bystander intervention programs, SMU is responding to a series of sexual assault allegations and warnings from the federal government that have plagued the university in recent years.

The university also convened a Task Force on Sexual Misconduct Policies and Procedures established by President R. Gerald Turner in 2012 to oversee programs and training.

“Students who engage in harassment by any means, including in person, through others or on social media, will be subject to disciplinary action,” said SMU Title IX Coordinator Samantha Thomas.

A male student filed a complaint through the OCR that stated that SMU failed to provide a “prompt and equitable response” regarding his alleged sexual assault by another male student in 2012.

In addition, two students who filed complaints said they were subjected to a hostile environment. One of these complaints involved the alleged 2012 assault, and the other complaint involved inappropriate language by a faculty member. The third complaint was withdrawn by the complainant.

“The reason that college campuses see this behavior is because it is one of the first time students have more freedom to make their own decisions,” said Roberts.

In November 2014, Rolling Stone published “A Rape on Campus.” The story about a female student’s rape at a fraternity party criticized not only the administration of the University of Virginia but also the callous responses of the victim’s friends. The accuracy of the story is in question because the victim may not have been forthright with the reporter about what happened that night. However, the story did highlight sexual assault and issues regarding Title IX violations.

“When students suffer sexual assault and harassment, they are deprived of equal and free access to an education,” which is in direct violation of Title IX of the Education Amendments of 1972 to ensure equal benefits of any education program receiving federal financial assistance, according to the American Civil Liberties Union website.

According to the SMUPD Crime and Fire log, there have been no reports of sexual harassment or sexual assault so far in 2015. The Justice Department’s National Crime Victimization Survey (2008-2012) shows that sexual assault is one of the most underreported crimes, with 68 percent left unreported.

“Our hope is that SMU’s education efforts and student-led initiatives have raised awareness that sexual assault is not acceptable on our campus,” SMU Vice President for Student Affairs Dr. Lori White said.

TakeCARE (Confident, Aware, Responsible, Effective) was launched in fall 2014 to help students develop skills to intervene, aimed at helping prevent sexual harassment, assault, and other forms of sexual violence, according to Dr. White.

The program was developed and tested by SMU Psychology professors and encourages students to be more than just bystanders.

This spring, the task force is looking for ways to apply the TakeCARE findings to the entire student body, as SMU researchers designed it specifically for SMU students.

“Not on My Campus,” a student-lead program developed in 2013, seeks to raise awareness of sexual assault and what it means to give consent. 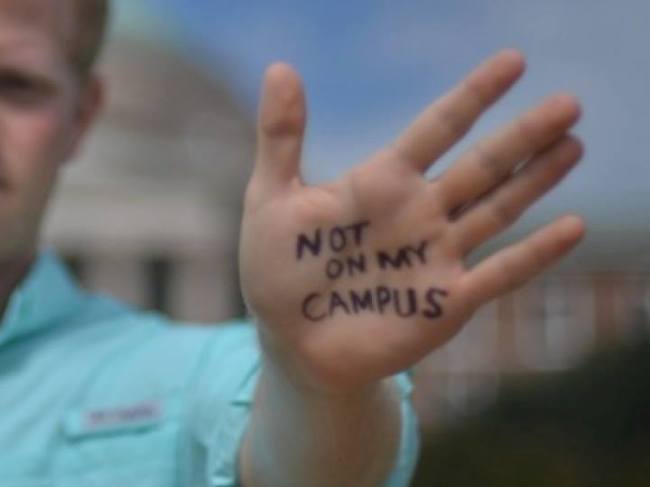 “We need to end the silence around sexual assault and engage Mustangs in conversations that challenge preconceived notions of rape and abuse,” according to the group’s Facebook page.

Some students say they do not feel any tangible effects of SMU’s efforts.

“The only time I’ve heard of SMU offices that you could go to in the case of a sexual assault is at Greek student events. I would hate to think that non-Greek members have never been told about these services,” said Roberts.

SMU faculty are also required to complete educational training, according to Thomas. Both the “Stop Harassment and Discrimination” tutorial and the “Eliminate Campus Sexual Violence” tutorial were designed to increase awareness of the university’s sexual and racial harassment policies.

This story was updated from an earlier version at 7:05 p.m.