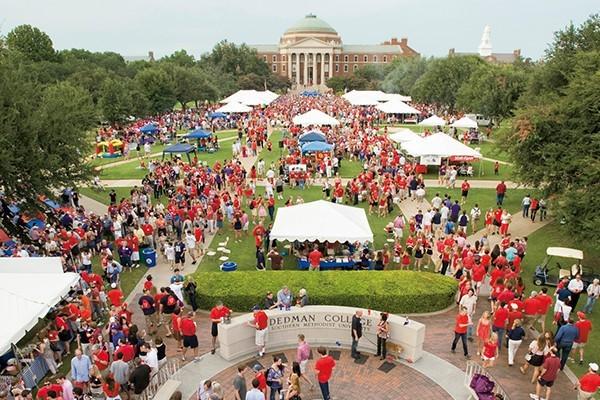 Ask most people, and they probably wouldn’t consider Boulevarding a word, much less a verb, but that’s exactly what SMU seniors did for the last time in their undergraduate careers before SMU’s football game against University of South Florida on Saturday.

Although the Mustangs were not able to pull off a win against USF, losing 27-37, that didn’t stop SMU seniors from making the best of their last game day. The Mustangs do still have one game left against Navy next Saturday, but because it is scheduled during Thanksgiving break, many seniors considered last Saturday’s game their last.

Boulevards are a quintessential part of SMU student life. While it may seem like a normal tailgate to any outsider, ask any student and the combination of the outfits, the pregame meals, and the tents filled with singing and dancing is sure to bring a smile to his or her face.

To many SMU Seniors, this was a very emotional day as it marked an important ‘last’ in their careers here.

Senior Gracie Singer said “I literally could not stop crying every time I saw another senior, Boulevards were my favorite part of SMU and I’m so sad they’re over”.

Most seniors agreed that they felt it was necessary to attend their last undergrad game and watch their Ponies take the field one last time. Senior Nati Bru said, “I didn’t feel nostalgic until I was walking home from the game and realized, that was it”.

While Boulevard season is over, and the countdown till next season has already commenced, seniors will definitely be mourning their last game day for a while.