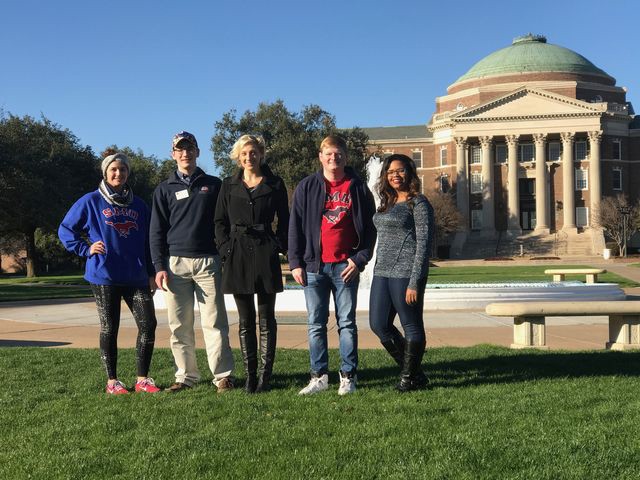 Junior Mackenzie Jenkins has lived on the SMU campus for three years after graduating from a private high school where she was often the only Black student in her class.

Jenkins is active on campus and in the Dallas community. She is involved in a variety of organizations dedicated to the advancement of minorities as a member of Delta Sigma Theta Sorority Inc. and president of the Association of Black Students. Jenkins was harassed by two students while attending her first on-campus demonstration three years ago–an event that would influence her opinion on race relations both in America and at SMU.

“Ferguson and Black Lives Matter were just beginning to become prominent my freshman year,” Jenkins said. “We did a demonstration at the flag pole and two guys walked by and said ‘F Mike Brown, he deserved to die!’”

The comment shaped Jenkins’ perception of the university’s on-campus environment.

“It was obviously disappointing; I was like, ‘Well I guess this is what this campus is,’” Jenkins said. “I think it is very evident that race relations aren’t good on campus when things like that happen.”

Jenkins is just one of the 61 percent of African-Americans who believe that race relations are generally bad in America, according to a recent study conducted by the Pew Research Center. The majority of African Americans reported experiencing discrimination based on their race at some point in their lives, compared to only one-third of Caucasians according to the results. The study also found that Caucasians are less likely to report that they have perceived unequal treatment when compared to African Americans.

The recent presidential election has influenced perceptions of race relations, both on campus and across the country according to many student leaders at SMU. Several incidents occurred following the election of President Donald Trump, including the distribution of anti-Black fliers, harassment and defamation of property, all of which have increased racial tension on campus.

SMU associate professor of political science and expert on public opinion Matthew Wilson said the last few years have not been a great period for race relations in the U.S. According to Wilson, racial tensions, already high due to recent instances of police brutality and the Dakota Access oil pipeline controversy, were brought to the surface during the presidential campaign.

“Trump’s election has emboldened certain segments of ‘fringe opinion’ among White nationalists,” Wilson said. “We’re not talking about a large number of people, but they can say some outrageous things and, therefore, make a lot of noise and get a lot of media coverage.”

Racial tension on the SMU campus has recently increased as well, according to Director of Multicultural Student Affairs Creston Lynch. Multicultural students often come to Lynch when they have felt marginalized or targeted on campus.

“It happens more often than we’d like it to,” Lynch said.

Lynch, who has worked at SMU for 10 years, thinks that there are still significant racial issues on campus based on what he hears from students.

“We have heard from several of our students from underrepresented populations, particularly African American and Hispanic populations, that there are some challenges; to deny that would be less than genuine,” Lynch said. “We’ve made some progress, but there’s certainly still a ways to go.”

Several SMU students have expressed similar beliefs, as have the approximately two-thirds of African Americans who reported that they believe race relations in America are poor. Senior and president of the National Panhellenic Council Jessica Mitchell, believes that race relations on campus are representative of a larger national issue.

“It’s very much so, ‘There’s no problem, we all kumbaya together!’ – even though there’s only one Black person in the class… I feel like that’s the sort of the climate on campus,” Mitchell said. “They just don’t even realize that there is a problem because it is not being widely talked about.”

Mitchell believes this issue continues to be swept under the rug.

“In America, we are trying to live the lie of the ‘post-racial America’ while not really confronting the history and finding tangible solutions to remedy that history,” Mitchell said.

Mitchell also thinks that there are still structural and cultural barriers to equality for minorities in America.

“We are still a society where people are using racial slurs, people are still threatening other people, the KKK is recruiting out in the open the day after the election,” Mitchell said. “It is definitely a society that hasn’t really confronted its racial history, but also a society that still is divided in terms of belief on race.”

However, not all African-Americans agree with Mitchell. Sophomore Dennis Stewart believes that race does not play a factor in one’s opportunities for success. His father’s success as well as his own personal experiences are examples of how race does not hold minorities back in America, according to Stewart.

Stewart doesn’t think that race has anything to do with a person’s success in the United States.

”I think that depending on how much effort someone puts in it, regardless of their race, they can achieve whatever they want.”

However, according to the Pew Research study only 42 percent of African Americans believe that the country will make necessary changes to put blacks on an equal footing with whites. Jenkins believes that the conversation should change from equality to equity.

“In a lot of my classes we talk about equality versus equity; you could give everybody X, but you have to tailor it so that people from Y community have the resources they need,” Jenkins said. “Minorities have opportunity, but we haven’t looked at equity yet.”

Lyle senator Matthew Lucci said that he believes the system is now set up to elevate minority families instead of majority families who may be in the same economic situation. This is something he thinks needs to be fixed on both sides.

“I am the second of seven children,” Lucci said. “My family makes about two-thirds of one year’s tuition in a given year, and because I am a male Caucasian, my scholarship levels are different than scholarship levels for, say, minority women.”

Lucci claims that there are more opportunities for minorities, particularly in his school.

“There are several opportunities that are available to minority women within Lyle that aren’t available to someone like me, even if they had exact same background that I did or if their family made twice as much as mine did,” Lucci said.

Junior and Armstrong Commons President Shelby Hill thinks that because most people in America aren’t overtly racist, they often completely ignore the idea that there may be a larger problem in our society.

“Another way that racism manifests itself is indifference,” Hill said. “I didn’t see any acts of racism growing up in Frisco, but since I got to SMU and met people from more diverse backgrounds I’ve realized that racism is still a thing. If you had asked me that in high school, I would have said no.”

Student body president Blake Rainey also believes that the country is currently facing increased racial tensions that he has also noticed on campus.

“When you have such a majority of one race that makes up a student body, you’re naturally going to have tensions,” Rainey said. “Unfortunately it is an issue, and I think that we do a lot of work to try to combat that and bring people together.”

The recent presidential election has contributed to on-campus race relations, according to SMU students. Both Black and White people think that the election has shed a light on racism that has always been present in our country.

“The election wasn’t something that just happened overnight and then all of a sudden there was a new crop of racists,” Mitchell said. “It allowed people to really pull back their hoods and show who they are; now we’re not calling them neo-Nazis, we’re calling them ‘alt-right.'”

Mitchell believes some people now have said and expressed themselves in a certain way that they hadn’t before learning of Trump’s presidential win.

“People are just more emboldened to stand behind what they say,” Mitchell said.

Trump’s xenophobic, anti-Islamic and misogynistic rhetoric during his campaign has “really divided the country,” according to Jenkins.

“President Trump’s slogan was ‘Make America Great Again’, so of course that is going to make a lot of people wonder what that means,” Jenkins said. “You can’t go back and think of a time where America was necessarily great, where there weren’t some group of people whose rights were taken away from them.”

“There are absolutely tensions, you can’t say that there’s not. They exist in a ton of capacities across our campus, unfortunately, as they do across the United States and on other campuses,” Fletcher said. “Fortunately, I do think that there are a lot of good things moving on our campus now that are trying to tackle those problems in a real way.”

Recently, the Student Senate Diversity Committee took efforts to create an inclusive campus for all students by hosting several events at the Hughes-Trigg West Bridge and at Sisters Supporting Sisters’ annual “Pajama Jam,” an event designed to help students unwind before finals.

Despite the disparities in opinions on race relations, many students believe that those of opposing views can come to an agreement through peaceful discourse, tolerance and understanding. Opinions can change; Hill was far less aware of the structural and individual racism that is still present in our society before coming to college. She recalls the ‘Why black men shouldn’t date white women’ flier found on the SMU campus in November as a perfect opportunity to change our culture.

Hill believes that in order to improve race relations in America, its citizens have to take the initiative to stand up and speak out against injustices.

“If you read that flier and didn’t do anything about it, you demonstrated indifference,” Hill said. “It isn’t enough to just pass by it and choose to not believe it; you have to take down the flier and speak out about why it’s wrong.”

The cycle of ignorance and indifference is one that needs to stop, according to Hill.

“It’s just contributing to the cycle of ignorance and intolerance that needs to be broken in America.”