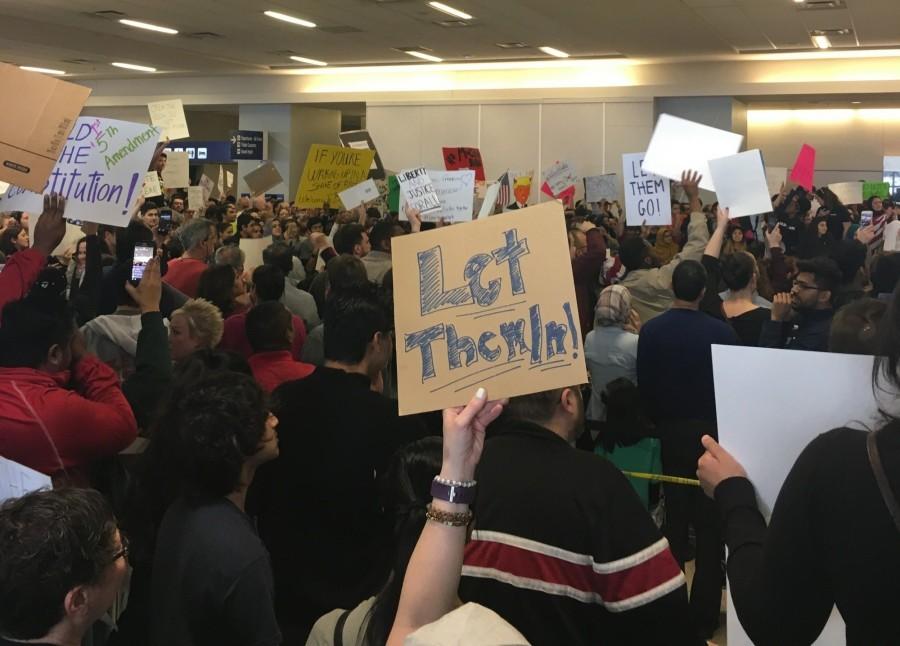 Many flight passengers around the nation were detained following President Trump’s executive order Jan. 27, restricting travelers native to seven Muslim countries from entering the United States for 90 days. Countries on the list include Iran, Iraq, Libya, Somalia, Sudan, Syria and Yemen. Syrian refugees are also banned from entering the country for 120 days.

| RELATED: Parents of SMU student among dozens detained at DFW airport before expected release on Sunday

Hundreds were stranded and detained at airports across the nation, including the family of SMU student Osama Alolabi.

Protests erupted at airports across the nation, including Dallas Fort-Worth International airport.

Several SMU students and faculty went to the protests that erupted following the news of people being detained at DFW D terminal Jan. 28-29.

Many were in disbelief of the new executive order passed and the immediate effect it had on passengers traveling with a visa and green card.

Students and faculty showed support to those protesting, helping out in any way they could.

Graduate student Keya Tollosa works at Union Coffee near the SMU campus. She attended the protest Jan. 28, prepared to pass out fuel to those protesting.

“The pastor at a local coffee shop, Union, asked on our group page if anyone wanted to pass out coffee to protestors,” Tollosa said in an email interview.

“I called him as soon as I could, grabbed my card to buy coffee and headed to DFW airport with five gallons of coffee, a lawyer, the president of a feminist organization, two pastors and two activists younger than 12.”

This protest hit Tollosa close to home, as she relates directly with those detained.

“Almost 12 years ago, my family and I arrived from Ethiopia through the Diversity Immigrant Visa – a congressionally-mandated lottery program that allows immigrants from underrepresented countries to gain permanent residency,” Tollosa said.

“My family did not play a role other than applying through mail to receive this visa.” Tollosa said she doesn’t think there is a much of a difference, if any, between immigrants that are thought of as ‘illegal’ and those who entered through a lottery process.

“I think the only difference between immigrants that are considered ‘illegal’ and recipients of a lottery to help the U.S. become more diverse is the definition given by Senate,” Tollosa said.”I really don’t see a difference between people that were granted lottery to come into this country from the ones that are banned from Syria, Iraq, Iran, Libya, Sudan, Yemen, Somalia.”

Tollosa said she believes it is everyone’s responsibility as American citizens to be present at protests such as this one.

“We have a duty to stand up to government when unethically arbitrary decisions affect millions of people’s lives,” Tollosa said.

Even though there were many people upset about the new executive order, she left the protest feeling hopeful.

“It was one of the most beautiful and hopeful things I have ever witnessed.”

SMU junior Larabeth Battaglia was at the protest Jan. 28 for about three hours. She didn’t question going to the airport.

“The only thing I could think about that day was the detainees,” Battaglia said in an email interview. “I felt I had no choice.”

The protest was very cooperative, according to Battaglia.

“As soon as important news came, everyone quieted very quickly and listened for the announcement,” Battaglia said.

SMU student senator Will Jones also made his way to the protest Jan. 28. He, like Battaglia, felt a responsibility to go; he believed it was important to show support for a fellow Mustang.

“When I heard that an SMU student was being directly affected by the Muslim ban, I didn’t hesitate in picking up my stuff and getting to DFW,” Jones said.

Jones, like Tollosa, also felt a sense of hope during the protest.

“There was a moment during the protest where you could really feel the love and support for one another,” Jones said.

Protestors showed care for one another in ways that most strangers don’t.

“Everyone was hot and thirsty and airport personnel started passing out water bottles,” Jones said.

“They had plenty of water to go around, but I didn’t see a single person around me take a bottle; everyone kept passing them around and asking their neighbor if they needed water.”

Jones was heartened by this act of kindness.

“It was very touching to see how much the stranger standing next to me cared about my health and the health of those surrounding me,” Jones said.

Sophomore Zeinab Aly said he had a responsibility to support his friends in their time of need. He attended both protests, Jan. 28 and 29.

“What primarily motivated me to attend is that Osama and Tarek are my friends and that I wanted to be there to support them,” Aly said. Aly wanted to stand up for his culture as well.

“The second major reason is my background. I am a first-generation Egyptian American. I’m Muslim, and my parents are immigrants to this country who are now citizens,” Aly said.

“I’ve personally experienced discrimination at the hands of the TSA, so I could imagine what those who were detained were going through having come off of long and strenuous 16-hour flights to be told they had to go through invasive questioning.”

Junior Aabid Shivji also went to the protest to stand up for his friend and show support to Osama and his family.

“I thought it was very important to go see what was happening on the front lines,” Shivji said in a phone interview.

“I went there because I know the two brothers and I wanted to see if there was anything I could do to help them.”

Chair and associate professor of art at the SMU Meadows School of the Arts Noah Simblist was at the protest Jan. 28 for about three hours. He, like the SMU students who attended the protest, felt the obligation to stand up for a dear friend.

“A friend and colleague, the artist Morehshin Allahyari, is Iranian-born and has taught and exhibited at SMU and around the world,” Simblist said in an email interview. “She currently is based in the Bay Area but is in Berlin for a conference.”

Simblist worries if Allahyari will be able to reenter the country.

“Despite the fact that she has a green card, her Iranian citizenship makes her subject to this law,” Simblist said.”She is a brilliant person and I am very worried that she will never be able to return to her home in the U.S.”

Simblist aimed to send a direct message to political leaders around the country.

“I decided to protest at the DFW airport to show support for those that were being detained and also to send a message to political leaders that there is a strong, diverse and intersectional community that stands for the rights of those that are currently being detained and deported based on nothing but their national identity and religious affiliation,” Simblist said.

SMU President Turner released a statement following the protests Jan. 28. He assured the SMU community that the university will stand behind their international students and those directly affected by the new executive order.

“University personnel will reach out to any student who may have had family detained as they attempted to enter the U.S.,” Turner wrote in a campus wide e-mail.”These family members began their travel to the U.S. before Friday’s executive order was issued. SMU will look for ways to support any of its international students whose families may have been affected by this order.”