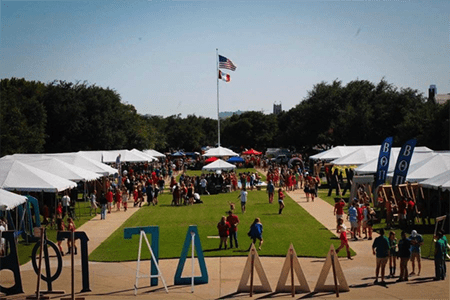 No more free alcohol. No beer in the fraternity tents. Drinking limited to a segregated area.

These are a few of the new rules that can be expected this fall if SMU administration’s proposed Boulevard changes are passed.

“SMU is moving toward having alcohol sales in the Boulevard section that can be used by all student organizations,” said Kent Best Executive Director of news and communications. “We have been meeting with students to discuss this issue, their concerns and will continue to do so.”

Booking a tent on the Boulevard would from rise from $4,000 to $6,000 — a cost that doesn’t include alcohol or salty foods. The $4,000 cost currently includes students’ option to serve alcohol.

“Our IFC representative told our fraternity that the tent rental would increase from $4,000 to $6,000 if the proposed changes go through,” said Kappa Alpha Order member Michael Jacks.

The Interfraternity Council (IFC) fraternities collectively decided that this money could be put to use elsewhere; they plan on boycotting the Boulevard entirely if these new rules are passed. Kappa Alpha Order president Andy Cook hopes that it doesn’t come to boycotting but is prepared to do so.

“We’ve already started to look into possible things we can do to host some kind of off-campus tailgate on game days in case the school continues to be unreasonable with the IFC and the rest of the student body is unhappy with the new rules and the process by which the administration came up with them,” Cook said.

The IFC fraternity leaders are considering sending a plan of action to the administration by the end of this week. Sigma Phi Epsilon president Zach Thomas said they are waiting to see how the university responds to their boycott.

The newly elected SMU Student Body President David Shirzad is also looking for a solution that will please everyone. Shirzad was unaware of the new rules when they were proposed, but is now working diligently to meet the needs of all parties.

“Now that we have been made aware of the proposed changes to the Boulevard, I will continue to work closely with Dr. Vogel and Rick Hart to find a solution that meets the needs of both the administration and students so that we can continue to have an enjoyable and safe time on the Boulevard and at football games,” Shirzad said.

The new rules bring safety concerns to campus as well. Junior Lindsey Wilson is concerned about the safety of her friends if the new rules are passed.

Other students expressed that these proposed rules are an attack on IFC organizations.

“This is to discourage people from going to hang out at the fraternity tents,” Junior Mackenzie Hutchinson said.

SMU alumnus Harrison Montgomery sees both sides of the argument.

“As an alum I think it’s a bad idea. As a businessman, I see how this could be a good thing for vendors — allowing SMU to bring someone in to handle everything and make some money on the Boulevard. Not like they need it anyway though,” Montgomery said.

The Daily Campus will continue to update this story as more information is made available.