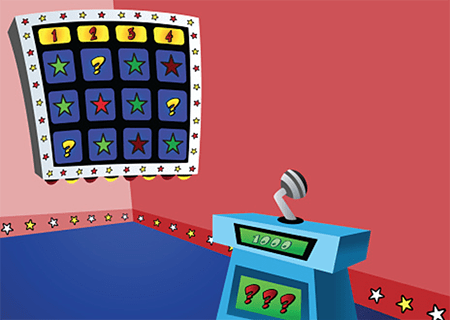 Who would have thought that SMU alumna, Kelly McCreary played Maggie Pierce in the romantic drama Grey’s Anatomy, or that House of Cards was the first original Netflix series?

This is just a sampling of the trivia topics at the Residential Commons Quiz Bowl March 4. Topics at the 10-round jeopardy game also included sports, music, movies and food.

“This event is part of the commons club,” said President of the Assembly of Residential Housing, Richmond Dewan. “We have these friendly competitive events against the other commons in order to boost the community spirit inside of the commons.”

The Quiz Bowl allowed for a friendly competitive spirit between teams.

“I most look forward to winning tonight,” freshman Kennedy Woodard said. “I motivated myself to get here early because I really want my commons to win.”

Vice President of Communications and Development of the Assembly, Alex Ramirez, was in charge of the audio and technical aspects at the event. He believes these kind of events bring the community together.

“We want students to just have fun on campus” Ramirez said. “This is supposed to be a bonding experience with everybody by enjoying the academics or fun questions we have for them.”

Round one started with TV and movie questions and round two required students to guess the title of a song as the music played out loud. Teammates were allowed to talk to one another and then had to write down their answer on a piece of paper.

“I had no idea what kind of questions I would be asked but I enjoyed the experience,” sophomore Pahno Georgeton said. “My friend liked trivia so I wanted to come along and see what it would be like.”

There were approximately 90 students at the event and around seven staff members. The largest team was Virginia-Snider, who came dressed in all blue, carrying their blue commons flag.

“Usually at each of the events we hold, we have around 100 to 200 participants,” Dewan said. “It’s a really great showing from all of the commons and it is a really great opportunity for students to get together and participate in a friendly and fun way.”

Armstrong Commons was the winner of this year’s Quiz Bowl. President of Armstrong Commons, Shelby Hill enjoyed the event and believed it was competitive from beginning to end.

“Everybody on the team had their own specialty or question that they contributed, and it was a good competition all around.” Hill said. “We didn’t know the winner until the very end, so thanks to everyone who made it such a competitive event.”