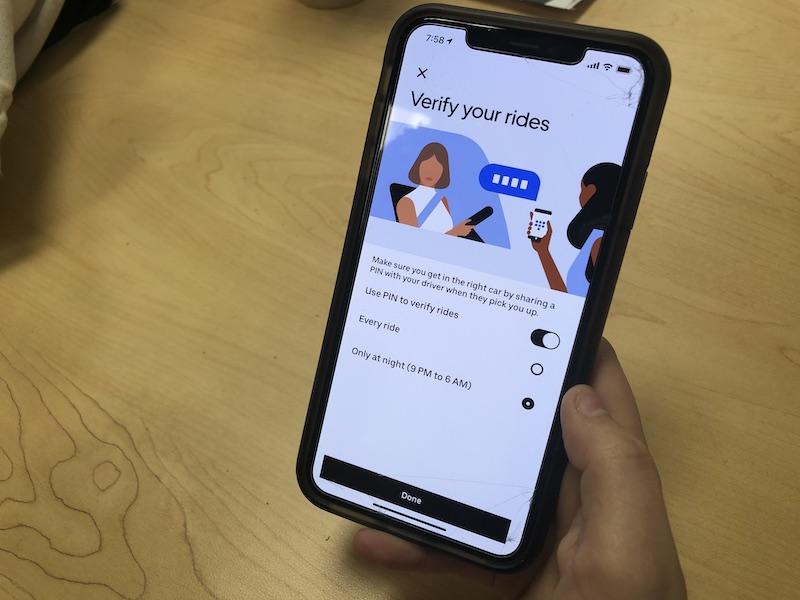 After a recent incident that left an Uber driver charged with two counts of abduction, felony hit, and run and reckless driving in Virginia, people all over are still concerned about their safety when it comes to rideshare apps.

“I personally have not had a terrible experience using Lyft or Uber that has made me fear for my life,” SMU junior Karen Gutierrez said. “But I would be lying if I said I did not experience a small amount of fear as I am getting into the car.”

Uber recently launched a new safety feature that is an additional step to verify people are getting into the right vehicle. This feature was introduced after the company received complaints from drivers finding it difficult to locate the correct rider at night. After requesting a ride, passengers are sent a special four-digit PIN code to give to their drivers before the trip begins. Drivers will only have five attempts to enter and verify the correct PIN number.

“As a girl, I think there are so many things we need to be aware of in this world,” she said. “It makes me feel better in terms of making sure the car is meant for me.”

Last year, Uber released a safety report detailing that the company had received nearly 6,000 reports of sexual assault in 2017 and 2018, and 464 reports of rape.

The 84-page report also contains information about estimates for the first six months of last year. According to the report, the company has nearly 45 ride requests every second in the U.S. alone. Based on the estimates, there were more than 800 reports of non-consensual touching of a sexual body part during rides, and approximately 100 reports of rape, all within the first six months.

Vazquez said she thinks the company needs to do a better job performing background checks on drivers.

“I had friends back [in Florida] almost get kidnapped and only escaped because one of the mom’s had been tracking them,” she said.

Along with the PIN code, Uber has a variety of safety features on its app as well. The app has an emergency assistance button, which displays a rider’s location and trip details, making it easier and faster to share information with 911 dispatchers. Another in-app safety feature is ‘RideCheck’. By using GPS tracking and sensors, this feature can detect if a driver is going off course or if a rider has been in a crash. Other features include ‘Share My Trip’ and ‘Safety Toolkit’.

Gutierrez says she usually lets someone know she’s getting picked up once she requests a ride.

“I usually text them while I am on the way, or I simply let them know when I arrive at my destination,” Gutierrez said.

Uber also has a three-step process that it encourages riders to use before they enter a vehicle. Riders should match the license plate, match the make and model of the vehicle, and double-check the driver’s photo.

Vazquez said she follows a fourth step in addition to these three.

“I usually never ask ‘for Brianna?’, rather I ask, ‘Who is this Uber for?’, just because I have heard stories of drivers saying yes and then assaulting or kidnapping riders,” she said.

However, even with these safety tips and features, riders are still concerned about their safety while using these ride-hailing companies.

“As a young female, all riding platforms and companies need to do a better job in making sure solo female riders are safe,” Vazquez said.