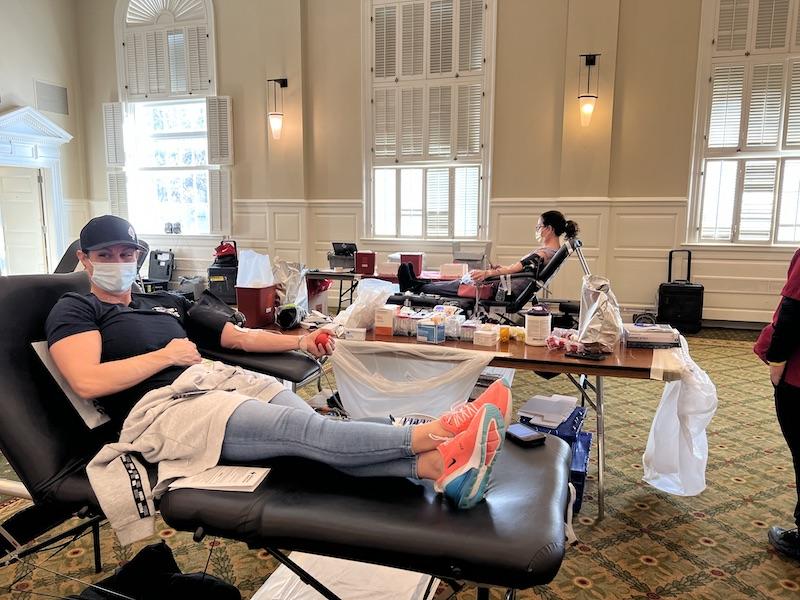 Joe Beeby isn’t your everyday person. Born and raised in Dallas, the Washington and Lee University graduate was commissioned as an officer in the U.S. Marine Corps for five years where he was a platoon commander, company executive officer and assistant operations officer at 2nd Assault Amphibian Battalion in Camp Lejeune, North Carolina. However, last week, Beeby was just like nearly 100 others in the EY Gallery Room in Fincher last week: one arm outstretched donating blood in an effort to address the nation’s blood shortage.

“In light of the recently declared blood shortage crisis, the Veterans in Business Club decided to gather students, alumni, and members of the community to donate blood and support this critical life-saving mission,” Beeby said.

Currently in his first year of SMU’s MBA program at the Cox School of Business, Beeby is President of a student-run organization for graduates at Cox, the Veterans in Business Club. Its mission is to provide a supportive network of fellow veterans aimed at assisting military veterans in their transition from the military to civilian life.

“We are proud to report excellent turnout and had more than 90 individuals sign up to donate blood as part of this drive,” Beeby said.

At the beginning of this year, the American Red Cross, declared a “national blood crisis.” According to the Red Cross, this it’s the worst shortage in over a decade with increased illness and the emergence of Omicron only compounding the issue.

“With the blood shortage being a thing, people should give as much blood as they can.” said donor Shirmon O’Connor at the blood drive on Monday as a Red Cross phlebotomist hooked her up to an IV.

The Red Cross is responsible for supplying 40% of the nation’s blood supply but the shortage has required the organization to prioritize who gets blood and how much. For example, according to the Red Cross website, it has had to limit blood product distributions to hospitals in which they may not receive 1 in 4 blood products needed.

Donation type varies depending on the donor’s blood type and patient needs, however, according to the Red Cross, a “whole blood” donation is the most common type due to its flexibility. The donation process for whole blood takes about an hour and often goes to trauma patients or those undergoing surgical procedures.

Individuals were able to make appointments for the SMU Veteran blood drive online through the Red Cross website where they could see eligibility requirements and learn about the blood donation process prior to donating. Donors also received a free $10 Amazon gift card in exchange for their blood donation.