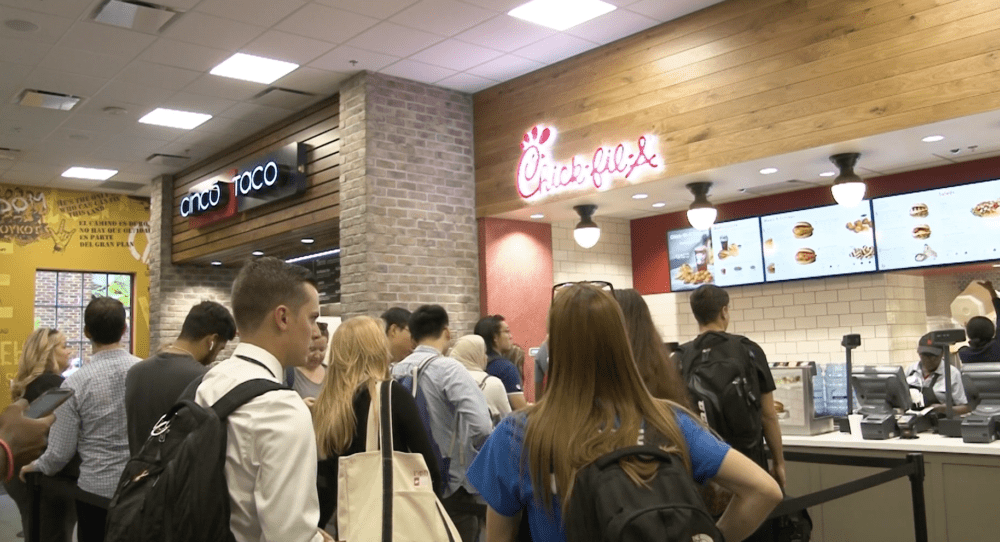 Students and faculty now get to hear their names being called, because the Chick-fi-A in the main course of Hughes-Trigg is now completely full service. Dallas-based Cinco Taco also joins the brand-new area.

“Everyone really wanted a full-service Chick-fil-A, everybody loves tacos, I don’t think anyone really visited the Subway too often, so I think it’s a good idea,” SMU junior Avery Cooper said.

Renovations started over the summer, and finished right before the fall semester began. The SMU student senate had a major roll in the new changes.

“Administration came to student senate and they were asking about just like what we thought about Hughes-Trigg renovations,” SMU student senate member Sammy Waken said.”They mentioned that they were fundraising, trying to get a lot of like outside donors.”

Last year’s student senate president Nathan Devera suggested they get started on the renovations before the fall 2019 semester.

“So, we wrote a bill in senate approving to raise student fees by like five or ten bucks for each student,” Waken explained.

Besides the two restaurants, the varsity and hang out space was also completelty renovated. Fresh and vibrant paint, new furniture and lighting, pool tables, and eight big screen TV’s are included in the renovations.

“One thing that they’re being really intentional about with these renovations is making it a space for students to come, feel comfortable, eat, do homework, play pool, and just kind of hang out,” Waken said.

“I’m so glad that they re-did the Hughes-Trigg varsity,” SMU junior Abba Yaney said. “I think the new varsity is way more inviting and a welcoming environment for students to come hang out and eat their food at, and I personally never liked Campisi’s or Subway, so the expansion of the Chick-fil-A and the addition of the taco place I think really improved it as well.”

Phase two of the renovations is expected to start spring of 2020.

For more information on where to eat in Hughes-Trigg, check out the the Campus Dish website.