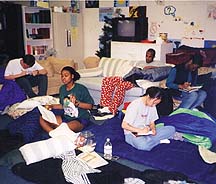 They arrived at the SMU campus late March 16 after a long spring break and even longer car and plane rides. Unloading their bags, memories they will never forget ran through their heads.

These students returned from Alternative Spring Break sites tired, but with a sense of fulfillment.

In each city, students encountered unique experiences from the organizations and environments where they did the service. Nadia Kamar, sophomore anthropology major, was one member who spent her break on a Navajo reservation in Shiprock.

The students in Shiprock worked at the Shiprock Home for Women and Children, a domestic violence center on the reservation. At the center, students helped employees move into offices, painted buildings and attended group therapy sessions with victims of violence.

Drug abuse, HIV and AIDS were issues addressed by students in San Francisco. Students assembled hygiene kits containing condoms and bleach which help protect against the spread of diseases through drug use and unprotected sex. They also attended therapy sessions at a substance abuse recovery center.

“The most rewarding part was finally being able to see the environment had more worth than just providing for humans,” said Julie Gonzalez, senior mechanical engineering and math major.

Gonzalez was one of SMU’s students in Elgin who helped the environment by mending animal friendly fences and tending to trees affected by forest fires.

In Cincinnati, students learned about issues unique to the city. Working with ReSTOC, an organization that renovates the numerous abandoned buildings in Cincinnati, they helped transform an underprivileged part of the city into a productive one.

Students also volunteered at the Drop Inn Center and the Peaslee Center and met with Cincinnati city council members.

“We got to meet with different people from all different aspects of the issue, and we got to see both sides,” sophomore Marietta Synodis said.

In New Orleans, students volunteered with an organization designed to preserve a unique and historical aspect of the city. Working with Save Our Cemeteries, students cleaned and groomed a cemetery. Students also assisted in repairing homes of elderly with the organization Christmas in October.

The students in Philadelphia worked with the Metropolitan AIDS Neighborhood Nutrition Alliance and City Year. Students made, packaged and delivered food to HIV and AIDS patients at clinics, hospitals and homes and worked with chlidren in an after-school program.

Students helped educate children on the issues of drugs and alcohol abuse. Students also worked with inner-city children and let them know about college and the opportunities they have. 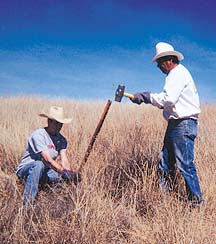