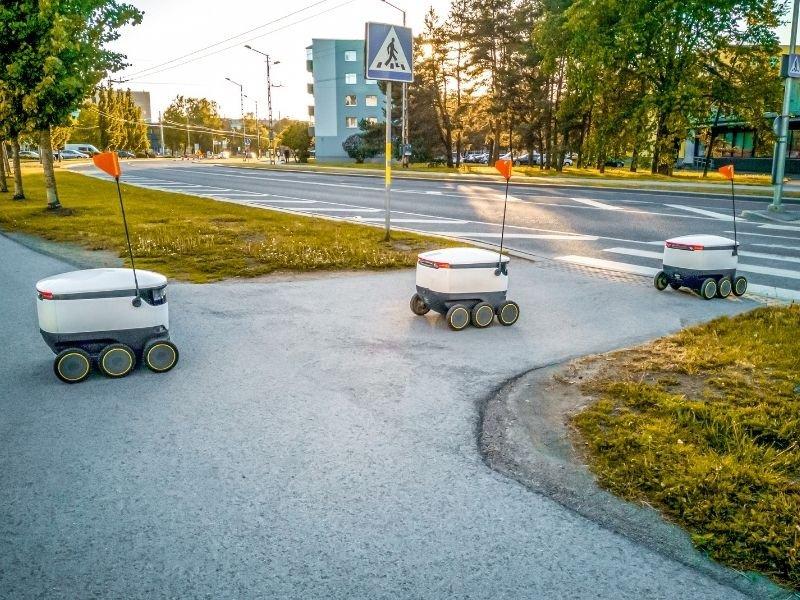 “Bestie!” First-year Mikaila Neverson calls after a little white robot scurrying past her outside Loyd Commons. “Where are you going?”

As if it understood Neverson, the machine carrying first-year Kelsey D’Esopo’s lunch comes to an abrupt stop. An awestruck crowd begins to form as D’Esopo eagerly pulls out her Starship app to open the motorized box containing her Panera Bread salad.

As the top of the vehicle hinges open, Bruno Mars’s “Uptown Funk” starts to blare from the robot’s speakers.

“This is appalling,” D’Esopo laughs in delight. She gingerly closes the robot’s lid and sends it away with a tap of her phone.

“Goodbye, my friend,” she says, and the onlookers jump back to give the robot space to retreat. It pivots 180 degrees on its six wheels, offering everyone a full view of its side profile that reads, “Hungry? I deliver to Mustangs!”

About 25 Starship robotic food carriers made a surprise appearance on SMU’s campus when students returned for the spring semester. The machines resemble a border collie in height and move with the grace of a remote-controlled car.

“Imagine EVE from WALL-E, but in the shape of a big box,” Neverson said. “It’s got this little orange flag and headlights – it’s super cute. We were dying laughing when it showed up.”

The side of the robots displays a QR code and an accompanying link to www.starship-smu.com. This prompts users to download the Starship app and select SMU from the 37 other campuses Starship services.

“I was mostly excited to order from the app because my sister’s campus has them, and she said that they were really convenient,” D’Esopo said. “It definitely makes life easier for us living in the farther Southeast dorms; we won’t have to hike to go get food, especially if it’s going to be cold in these coming weeks.”

Before the robots went operational, Starship mapped out the campus and presented the delivery bots with potential obstacles that they may face. The robots worked using a combination of mapping technology and GPS to deliver food.

“We’ve pretty much planned and prepped for all situations and scenarios,” Starship site lead Chris McClain said. “Our technology is pretty good to where we are very aware of what’s going on with our bots. So, no crazy situations; people respect them almost as much as other humans. Sometimes I see people follow the bots or trying to interact with them like a person.”

Deliveries can be made within a 4-mile radius. The journey and location of one’s delivery can be monitored through the app.

“I think they’ll make people lazier,” senior Eliana Abraham said. “To people who have legs that work: don’t be lazy. I also wouldn’t want to use them because I’m afraid people will steal my food.”

Starship’s website assures that the cargo bay is mechanically locked and can only be opened by the recipient with their app.

“I ran across one that was unlocked outside of Cox, so I just kind of opened it to see what was inside,” sophomore Mohan Desai said. “I wouldn’t have stolen anyone’s food, but there was nothing in it. I think it was just unlocked because no one had put food in yet.”

SMU Dining Services sent out an email claiming that the robots are “part of a range of measures we offer to support social distancing” and offer a “safe, fast, affordable, and environmentally friendly delivery option.”

“I think it’s good in theory if it is to increase social distancing, but SMU isn’t really doing anything else that’s in line with COVID-19 safety precautions,” senior Maria Katsulos said. “The university isn’t social distancing in the classrooms anymore, and they’re not requiring masks in indoor spaces. It feels like it’s a bit too little, too late.”

Launched in 2014 by Skype co-founders Ahti Heinla and Janus Friis, Starship deliveries saw an exponential increase in attention starting in August 2019. The company completed one million autonomous deliveries by January 2021 and two million by October. Heinla credited the increased demand for contactless delivery during the pandemic as the reason for the organization’s growth.

“They seem a little “Big Brother” to me,” Katsulos said. “The whole thing kind of freaks me out.”

Starship has expanded past the continental United States, finding customers in England, Germany, Denmark and Estonia.

“Robots will never take over; technology only goes as far to assist us in the areas that we see fit,” McClain said. “And I believe that that is exactly what we do. Yes, we seek to allow people more convenience. But we also improve their overall life, like helping those who are handicapped or disabled.”

First-time users of the Starship app can get free delivery on their first order through March 31. The app says that Flex Dollars will soon be accepted as payment.

After successfully sending their singing robot away, D’Esopo and Neverson head inside, only to notice 10 minutes later that the machine has gotten stuck in place on its way back to Hughes Trigg.

They look at each other briefly before the robot finally maneuvers around its obstacle, rushing to address its next – likely impatient – customer.

Does a delivery robot receive a verbal reprimanding for being late, just like a human employee? Or will it get a wagging finger and a slap on the side, like an untrained dog?