By Lili Johnston and Keagan Snively 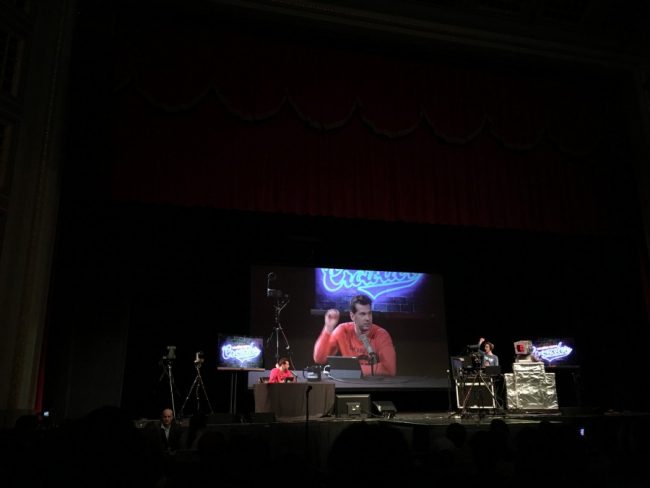 On Thursday, March 22, conservative comedian Stephen Crowder took the stage for a sold-out, live broadcast of his video series Louder with Crowder.

“SMU, you called down the thunder and now you got it,” he said. And the crowd really was thunderous, cheering, shouting, and clapping throughout the show, clad in “Make America Great Again” hats and “Socialism is for Figs” t-shirts.

Crowder’s presence on campus was contested up to and during his show. “We want to thank the protestors outside,” Crowder said in his opening, “for making tonight such a special night.” The crowd cheered.

Joanna Pearce was one of the protesters that stood outside McFarlin auditorium, sign in hand. Pearce is President of SMU OUTLaw, a group of law students that support the LGBT community.

“We respect and value free speech,” Pearce said. “A lot of us are law students, so we’ve dedicated our careers to learning about the constitution and defending it… But we also understand that the right to say something doesn’t mean you should.”

Just like Crowder’s commentary was contested during the event, his commentary is often contested, by individuals and, more importantly, social media platforms. “This guy gets in trouble all the time,” said Crowder’s lawyer, who he refers to as “half-Asian Bill Richmond.”

“Twitter actually emailed me personally and said, hey, you should advertise on Twitter,” Crowder said. “They manually helped me create ads, took the money, and then removed the ads they helped create and banned our privileges because of the violation of theirs,” he said. “They wrote it!”

This case wasn’t and isn’t an isolated one.

“I don’t think they should necessarily be regulated as telecommunications companies,” said Crowder. “But I do think [social media platforms] should be forced to be held accountable. They either need to decide, ok, we are a politically neutral platform, and be held to that standard or [they] need to sack shit out to a judge and jury and say, ‘Listen, I don’t really care. It’s not an open platform, I want to influence elections. Let me watch my stock dive and burn us all down.’ But they have to make a choice, because right now they’re lying to the American public about what they do. And that’s what stops competition,” Crowder said.

Crowder’s lawyer mimicked the same sentiment, though without profanity: “This really is bigger than just a question if…someone [can] do what they want to do with their forum. It’s a question of what are they able to do in a public square that’s relevant, while other people are taking this fight to the social media platforms,” said Richmond.

Like any of Crowder’s shows, he parodied minority groups and liberals: Bernie Sanders, Joe Biden, illegal immigrants, and liberals, themselves. “Liberals…I just don’t think they think enough of Nazis,” Crowder said. “Do they realize they were really bad guys?”

However, at some point in the show, Crowder stopped making fun of other people and started defending himself.

“It started with this guy,” he said, “a professor. Not even from SMU, from UT Arlington. He brought up false memes that were used against me, by actual Neo-Nazis for irony…He said, ‘Let’s send this to the registrar’s office and the Dean and get this guy banned,’” Crowder explained.

“If you want to ban me for telling some jokes tonight…fine. But don’t ban me for something that I didn’t say, and that’s what we’re seeing happening increasingly,” Crowder said.

“This kind of victim culture where everyone’s looking to be the latest, biggest victim. And, unintentionally, they create real victims,” he said. In the case of the UT Arlington professor, Crowder and his team became the real victims; “[he] demanded action against all of us, by the way, who make a living off of here,” Crowder said.

“The truth is that being offended, not only does it not make you right…what disturbs me, [is the] media and Hollywood, they rush to grant these people the moral high ground,” Crowder said. “The progressive left [does this]. They want to grant the moral high ground to the person, the minority group of the day, which claims to be the most oppressed…just because they’re claiming to be offended, regardless of legitimacy.”

“Let’s go through some examples of illegitimate offenses: Rape culture on campus,” he said.

“The media pushes the stories to make the public believe in rape culture,” Crowder said. “Remember the UVA hoax? The Duke lacrosse? Mattress girl?” he said.

“We know now, today, every single one of them…was fake. Mattress girl…you were texting the guy that you still wanted to have rough sex with him with a ball gag and he didn’t text you back and so you ruined his life. We know this now, but initially, they were treated very, very differently by the media. Why? Because whoever the offended individual or group was, they were immediately given the moral high ground, regardless of proof,” Crowder said.

“Even though these stories were completely proven to be false, they were discredited, male students had their lives ruined. They suffered from university policies, by the way, inspired by these hoaxes, and then more men had their lives ruined due to campus rape tribunals with no due process…You have the ramifications of lives ruined as a result,” Crowder said.

Crowder drew upon pronouns as another example. “This is the offense, pronouns are so important that we quite literally [Switches to high pitched voice.] endanger trans people lives if we don’t respect them,” he said.

“The moral high ground was immediately granted after this movement, even though many of these pronouns are just made up. The truth is that no one can possibly keep up with them,” Crowder said. “The community itself hasn’t agreed on them.”

“I understand that everyone here wants to be nice. Right? But what we cannot do is allow people to think that they’re right and allow them to silence us just because they claim to be offended,” Crowder said.

“The level of feeling offended, even though the media will tell you this and your professors here will tell you this…it doesn’t determine morality. It doesn’t determine the level of rightness because, no matter what stance you take…If you take a stance, period. If you have an opinion, period. Someone is going to be offended. That is, by its very nature, what having an opinion means,” Crowder said. The crowd cheered.

There was also sliver of a bipartisan moment.

“Of course, we see this on the left, and, I hate to tell you, we also see this from people…on the right, sometimes,” Crowder said. “People who clutch their pearls and gasp if you ever say that Trump did something maybe a little bit dumb.”

“The reason why is because people are seeking to take the moral high ground through being offended, rather than through the truth. And the truth, it should be just as easy to say, ‘Donald Trump does do some dumb shit’ as it is to tell someone that you cannot change your biological gender no matter what color you die your hair or how many Buzzfeed articles you write,” Crowder said.

The whole show can be viewed here.