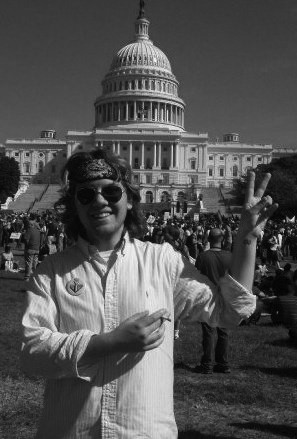 Tom Elliott attended a protest in Washington, D.C. to rally for equal rights for the LGBT community in October. (Photo courtesy Tom Elliott)

Tom Elliott is a crusader, although he doesn’t wear a long cape or a mask. His signature accessory, a headband, is only there to hold back his long hair.

A fifth year political science and philosophy major, Elliott is on a mission that first began as a journey through tough life lessons and self-discovery. Now, he says he wants to channel those lessons toward improving SMU for students like him.

In short, Elliott wants to provide a clear voice for a demographic he feels is virtually unheard on campus: lesbians, gays, bisexuals and transgender people.

At Tuesday’s student senate meeting, Elliott will try to convince the body to pass a resolution that would force a referendum this spring on adding a Sexual Orientation and Gender Identity senate seat. He has gained student and faculty support for the measure and hopes to see it succeed before he graduates in May.

The purpose of the proposal, Elliott said, is to change the perception that the general SMU population is intolerant of LGBT people.

Based on feedback on surveys it conducts with students, the Princeton Review recently named SMU number 14 on a list of schools labeled, “alternative lifestyle not an alternative.” Translation: SMU is among the least tolerant campuses in the nation for LGBT students.

The SMU Office of Public Affairs and the SMU Women’s Center issued a formal letter to the Princeton Review in response, touting its record as a progressive institution by providing same-sex partner benefits to faculty and staff, funding LGBT student groups like SPECTRUM and partnering with local LGBT groups and organizations to provide support for SMU students.

The practice of formally establishing support for LGBT groups on college campuses is growing nationwide, beginning with the first such organization, the Student Homophile League, which formed in the 1960s at Columbia University.

However, many schools are struggling with the idea of changing their longstanding institutions like student governments and other elected offices or positions to include official LGBT representation.

Last month, the University of North Texas confronted its own challenge with gender identity and same-sex issues. A resolution introduced through its student government triggered a vote on whether to allow two men or two women to run for Homecoming king and queen together. The proposal was rejected 58 percent to 42 percent in an election that drew record turnout, according to The Denton Record-Chronicle.

After months of discussion, strategizing and even a pilgrimage to Washington, D.C. during National Equality March last month, Elliott and his peers in the LGBT community, including some straight allies, decided they want to change SMU’s image.

Since early October, Elliott and a number of fellow students supporting the proposed seat have addressed the student senate at weekly meetings. Hoping to spur action, they have delivered impassioned pleas and stirring anecdotes about discrimination and persecution they’ve faced on campus because of their sexual orientation.

Elliott has spoken about his own experiences and those of friends, some of which have ended in tragedy. This, he said, is why providing a voice for LGBT students is so crucial.

“I hope that a student representative can add another element of diversity to the senate, and in doing so enable people to overcome their own prejudices about the LGBT community on our campus,” Elliott said.

Ironically, those prejudices were even difficult for Elliott to overcome as a new SMU student five years ago.

Arriving on the HilltopA recent high school graduate from a conservative, Christian family in rural Royse City, Texas, located 30 miles northeast of Dallas, Elliott began his SMU experience by joining the Mustang Band, a fraternity and the Young Conservatives of Texas.

Joining YCT provided him with opportunities to speak out about issues he believed in, including challenging affirmative action and rejecting the need for special-interest seats in the student senate.

At the time, the debate over special-interest seats had already reached a fever pitch. Supporters and opponents raged back and forth following the nationally infamous “bake sale” hosted by YCT in which customers were charged different amounts for baked goods based on their race, ethnicity or gender. The event protested affirmative action policies in higher education.

In response, the student senate formed an ad-hoc committee to study the issue of student representation and found that special-interest seats, namely an African-American, Asian-American, Hispanic-American and an international student seat, were necessary and proper to fulfill the senate’s charge to faithfully and thoroughly represent all students at SMU.

While engaging in discussions and protests with YCT, Elliott said he began to seriously question himself and his beliefs. Back at home, a short, unsettling comment marked the tipping point for him.

Elliott said he was shocked when a family member called a man on television a “faggot” because he had died his hair blonde. A seemingly insignificant instance Elliott said was enough to shake loose the remaining foundation for the beliefs he had inherited from his family.

“I decided that I would start from the ground up in understanding the issues and forming opinions on them based on my own life experiences,” he said.

A year later, still grappling with his beliefs, Elliott enrolled in a gay and lesbian literature course. It was through the stories he read that he said he found himself identifying with being a gay man, although he said he wanted to remain reserved.

“I swore to myself that I would never be one of those ‘flaming gay guys’ or ‘a militant gay,’ and I wouldn’t be carrying any rainbow flags or speaking openly about LGBT rights,” Elliott said.

A series of conferences he attended on gay issues led him to change his mind once more. By interacting with people from different backgrounds and with varying life experiences, Elliott said he gained unique insights into what it meant to be a member of the LGBT community.

“Although I didn’t believe in much, I did believe that it was wrong for people to be treated as second class because of their identities, something that they cannot change about themselves,” he said.

Marching on WashingtonOn Oct. 11, an estimated 200,000 people staged an unprecedented protest in Washington, D.C. to rally for equal rights for the LGBT community during the National Equality March.

Among them, SMU students Elliott, Richard McPhee, Kristen Baker-Fletcher and a handful of others marched representing the Hilltop.

The trip was a bonding experience for all who took part, Elliott said, adding that the contingency of SMU students returned from Washington with a sense of purpose that drove them to make changes to the campus community.

“It was important to me to be able to bring back those experiences to campus,” McPhee said.

The trip provided the impetus for seeking representation in the student senate.

Building momentumA petition with 413 signatures, 68 percent from students, has been circulated to gain support for the legislation pending in the student senate.

Elliott is confident that the piece will pass and that students will be able to vote this spring on whether to add a Sexual Orientation and Gender Identity seat to the senate.

Victory would be bittersweet, Elliott said, because he will no longer be enrolled when the first student is inaugurated to fill the seat. Still, he says the fight will have been worthwhile.

“Regardless of your beliefs on anything … it is important to be able to stand up for what you believe in,” Elliott sa
id.