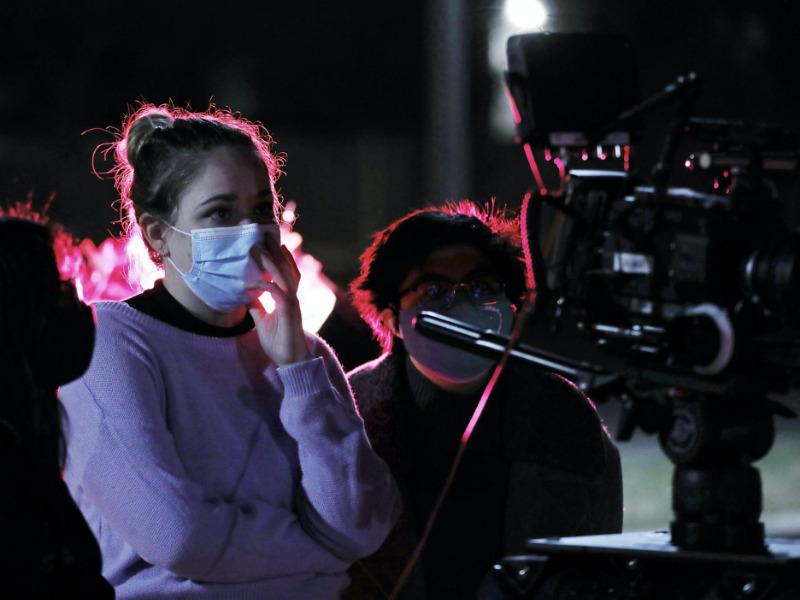 Junior Anna Butcher sat on the smooth pavement of her driveway. Having recently graduated from high school, she was hard at work cutting through baby blue and bright pink binder dividers with scissors and then taping the halves to the frame of a lampshade. She was making her audition tape for SMU’s film program and it didn’t need to be anything too fancy.

But the one thing she wanted for her tape was colored lighting.

Like most filmmakers do when they have little resources, she got creative and used what was around her: a lamp, her iPhone, and colored pieces of plastic.

The 21-year-old originally wrote the script when she was 16 and then completely rewrote it last year. Now in her junior year at SMU, She wanted to add to the story some of the wisdom she had gained since last penning the script.

After rewriting it, Butcher turned the script into a short film, called “Heavenly Bodies.” The SMU junior took the story from script to screen in just four months. This time, she got to use the professional color gels and light kits SMU lends to its student filmmakers.

The thought of her burgeoning interest in film school brings a smile to Butcher’s face. Butcher recounts one day when she stayed home from school due to migraines and discovered what would become the catalyst for her career in student film: a TV show called “30 Rock.” She says that day made her fall in love with “the operation of how a show runs.”

At SMU’s film department, students are very hands-on. For example, freshmen are required to take a production class that teaches them how to use the different film equipment available to them at SMU. This was something Butcher was looking for in a college program.

“A lot of programs for BFAs don’t have you start using equipment and making your own films until you’re a junior, whereas SMU has you start as a freshman,” Butcher said.

When Butcher got here she got right to work volunteering on as many student film sets as she could find. Her first job was on a Halloween film set where she helped decorate the set of a horror short film.

In her next set, she took a promotion to costumes, hair, and makeup. Though this time she was working on a senior’s final project, so tensions and nerves were high.

“It was a little intimidating, just because I was with all these older kids,” Butcher said.

Butcher quickly got the hang of it and was ready to take on her own script. Finally, in a sophomore/junior-level film production class, she got the chance to transform her audition tape into a fully-fledged short film titled “Heavenly Bodies.” The semester-long course moved fast but allowed Butcher to learn as she went through the phases of production.

“Heavenly Bodies” explores the sexuality of women and flips the usual gender dynamics seen in film. Instead of the guy chasing the girl, Butcher’s film follows a young girl who tries desperately to send subtle signals of her desire for a guy who is completely unaware. The girl in the film has no name, in the script, she’s simply referred to as “Girl.” Butcher says this decision was made because the character’s inner monologues about sexuality are meant to reflect all women.

“I think that feeling this way is ok. Acting on it is ok,” Girl says at one point in the film.

Butcher had wanted to explore how women have two sides, one of innocence and one of hypersexuality.

“It’s really hard to balance the two of them, especially when a girl wants to lean one way over the other,” Butcher said. “I think that it’s a really nice exploration of both sides and I don’t think there’s a wrong choice to pick because it’s up to her.”

This is where Butcher’s gravitation towards colored lighting comes in. She uses different colors to illustrate the two different sides of her protagonist. In her film, a scene plays out in one of two distinct colors: blue or pink. When the screen is illuminated blue, the girl is portraying innocence, but when the screen lights up pink, she is portraying hypersexuality.

Butcher’s professor, Mark Kerins, acted as a sounding board when she was exploring the theme of women’s sexuality in her original script. Kerins gave advice and critiques to bring her vision to life.

“I like that she was thinking visually about how to convey to the audience these sort of two distinct realities,” Kerins says. “The lighting and the colors I thought were pretty reflective.”

Filming took place late in the night so the colorful lights illuminated the entire space and the car which is the movie’s main setting. Standing in the church parking lot looks like stepping into a painting. The red and blue luminescence covered the body of the pearl-white SUV, meeting in the middle to make a pastel purple. When both lights are on, they each claim one side of the actress’s face making it look like cotton candy. The colors are a stark contrast to the muted tan of the car’s interior. On camera, the colors pop like a Warhol painting.

Ultimately, her hard work has paid off as Butcher has gotten nothing but praise from her crew members. Junior Piper Hadley was the producer on Butcher’s film set and spoke about how fun Butcher was to work with.

Now that the film is done, Butcher is looking to get it into film festivals. But she is also taking the time to revel in her achievement.

“It is so nice being able to see something and be like ‘I made that,’” Butcher said.

However, time does not stop for a student filmmaker and Butcher is already working on new projects. Butcher was the production designer for a feature film called “The Better Part” which gets released in a month. She is also still helping other students with their films. Butcher was the production designer for a student’s senior thesis film called “Boppie” and she worked on the set of a student’s short film titled “Sound Off.”

“I’m super excited to work with Anna on the SMU Summer Feature,” Hadley said. “She’s been a great producer since the day she joined the team.”

Butcher encourages aspiring filmmakers to watch a lot of movies as she believes you can pick up more than you realize from movies alone.

But she also recognizes this is only half the battle.

“Don’t be afraid to goof around,” Butcher said. “People can make amazing things on iPhones and with iMovie.”

Two years ago, Butcher experimented with household items in order to get the colored lighting she desired for her audition tape. Using SMU’s film equipment, she has now transformed the audition tape into a highly produced short film.