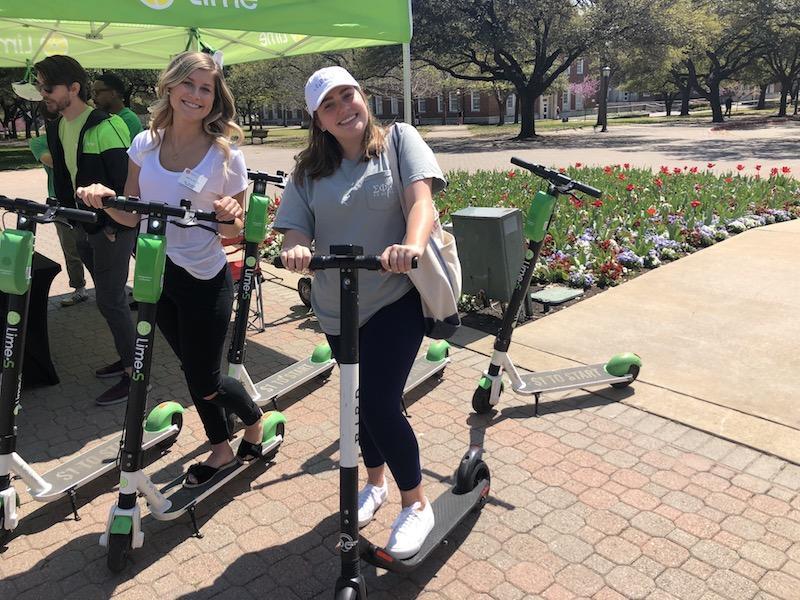 Lime and Bird representatives were thrilled to introduce and demonstrate their electric scooters to the SMU community at the Flagpole on March 26.

“We’re excited to be on campus and I think Lime scooters are a huge asset,” Lime Operations Manager Dave Thienel said. “It gets students to class three times faster than they would walking, it’s accessible, and it’s cheap.”

“I love the Bird scooters because it’s quicker to get to class and they’re so fun,” SMU sophomore Abby Walczak said.

Lime and Bird representatives gave out free Lime and Bird helmets, promotion codes, and Bird drawstring bags to anyone who stopped by their tents.

Lime and Bird electric scooters were officially introduced for use on campus last week. These scooters were previously banned from campus under a University Park ordinance that bans the use of motorized vehicles.

Some students were unaware of this ban.

“I was surprised that they were banned in the first place,” SMU sophomore Saeed Almazrouei said. “If you park your car far away and you want to come here, you can use Lime instead of walking, which is good.”

SMU Student Body President Nathan DeVera led the initiative to bring Lime and Bird scooters to campus. DeVera and the rest of Student Senate wrote a piece of legislation allowing the use of these scooters on and around campus.

DeVera said that this legislation, along with a letter asking for an exemption from the ordinance, was “very well-received” by the University Park City Council. Bird and Lime electric scooters will remain on campus for a data trial period through June 30, 2019.

Bird and Lime have each provided SMU with 40 electric scooters; however, this number is subject to change according to demand. The trial period is intended to gather data on Bird and Lime scooter usage to asses their community benefit.

Texas law does not require the use of helmets, but riders are strongly encouraged to wear helmets when using the scooters. User safety is still a priority for Lime, Bird and SMU.

“We always encourage that as a company,” Bird representatives said.

More rules and campus parking guidelines for these scooters can be found here.