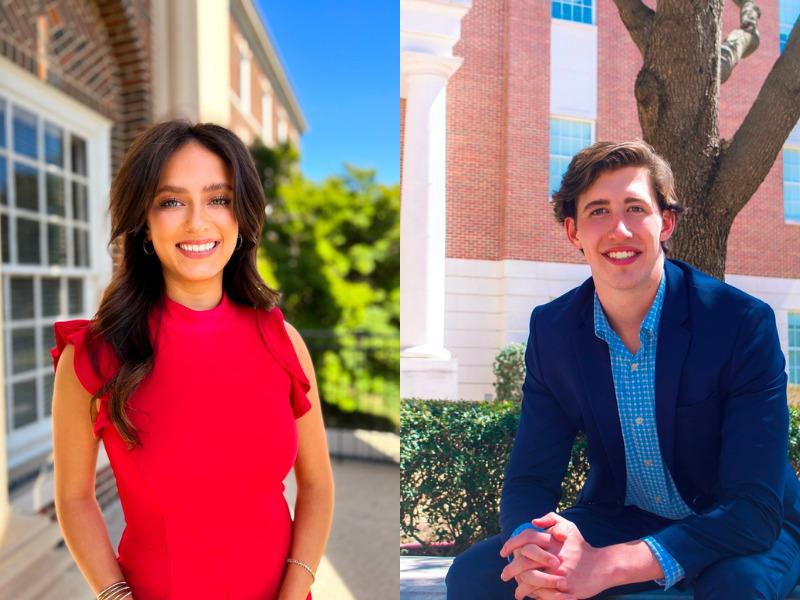 The elected President, Sydney Castle, is a Hunt Leadership Scholar studying Business Administration and Marketing. In the past, she has served as First-Year Student Senator, Pre-Major Senator, and Student Body Secretary. In addition to Senate, she is also a Rotunda Scholar and involved in Student Foundation and Chi Omega.

On her campaign Instagram (@castleonthehilltop), Castle emphasized her goals for boosting inclusion and diversity on campus. She also spoke about her plans to “rebuild the narrative” in Senate, including requiring “weekly recap reports” from all Senators and expanding the scope of some officer roles.

The elected Vice President, Alex Alarcón, is an upcoming Junior and Hunt Leadership Scholar studying Political Science. During his campaign, he spoke about making Senate more accessible for student organizations, creating accommodations through disability-friendly facilities and book funds to help alleviate book costs, and holding himself and Senate accountable for their promises.

The new Secretary, Hope Heiden, is a sophomore who recently introduced a sexual assault prevention program where Senate partners with bars and clubs near campus. In addition to her involvement in Senate, Heiden is also a member of Kappa Alpha Theta.

Clayton Meyer, the new Treasurer, is a sophomore studying Political Science and Economics. He has previously served as a Dedman Senator on the finance committee for Senate and is also involved in Student Foundation, Mustangs for Hope, and Phi Alpha Delta.