On Tuesday, Feb. 7, the 103rd Student Senate convened for their weekly meeting. 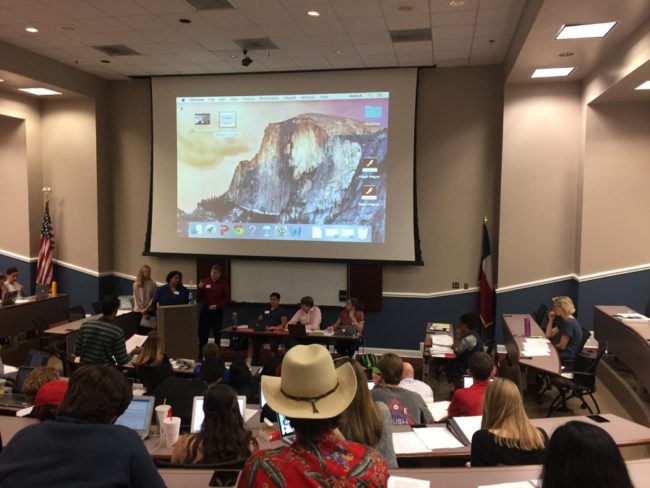 It was at this meeting, notably more populated than normal, that Senate constituents unanimously passed a resolution to amend the Senate by-laws. The resolution establishes an “institutionalized ad-hoc committee on campus inclusion and to establish charter freezes,” as the bill coins it.

-RELATED: What is this bill? Read about Senate’s last meeting

Authored by Student Body President Blake Rainey, Diversity Committee Chair Cecily Cox and Organizations Committee Chair Olivia Buerkle, the bill combats discrimination at SMU, with the initiative being spurred on by recent occurrences here and at other universities nationwide.

The bill gives Senate the right to temporarily seize funding for an organization for a specific period of time and the right to call a committee to respond to discrimination, specifically by “releasing statements,” explained Rainey.

However, the bill was not always as unanimously supported as it was on the day it passed.

Lucci summarized the results of the poll. Of the approximate 400 students that responded, 40% voted in favor and 57% voted against.

However, the question the poll indicates doesn’t match the true sense of the bill; the poll enumerates privileges provided by a former version of the bill.

Even Senator Lucci said, “I do feel what we have now is reasonable,” referring to the current version.

President Rainey clarified, “Student Senate will not investigate whatsoever. The first initial reactions don’t involve us…It is not our role to say what is discrimination.”

It is only after allegations of discrimination come to the attention of the Student Code of Conduct office, they complete an investigation, determine discrimination did occur and notify the organization responsible, that Senate will decide whether or not to freeze the charter in response.

“This bill gives us the freedom to respond once the question of discrimination is no longer a question,” said Rainey.

It’s also worth noting that, before this bill, Senate previously had the power to revoke charters from organizations for any violation of the discrimination clause. That power still exists. The less severe charter freezes are the novel aspect.

“An attempt to close loopholes,” is what Rainey called the Senate’s new-found control over funds.

“This bill will provide the toolkit and guidelines to hold SMU students accountable for discrimination,” said co-author Cox.

Grant Wolf, President of Young Americans for Freedom, prefaced the meeting with unsupportive comments on the bill.

“The bill proposes to silence free speech,” said Wolf. His other reservations on the bill and proposed amendments are twofold: there is no repeal process and, because no Senate-chartered organizations have ever been found guilty of discrimination by the Code of Conduct office, the bill isn’t necessary.

Both Rainey and Cox promoted the anticipatory nature of the bill. “Why should we wait until it’s too late?” said Cox.

“This is not an attack on free speech,” said Flowers. “This legislation does no other than promote brotherhood…Coming from a marginalized group, I am looking for dignity,” he said.

“We’re not trying to change the world,” said Cox. “This is not going to stop people from thinking or saying whatever they feel,” she said.

“It’s to make people feel included…for the students who are too scared to go to class,” said Rainey.