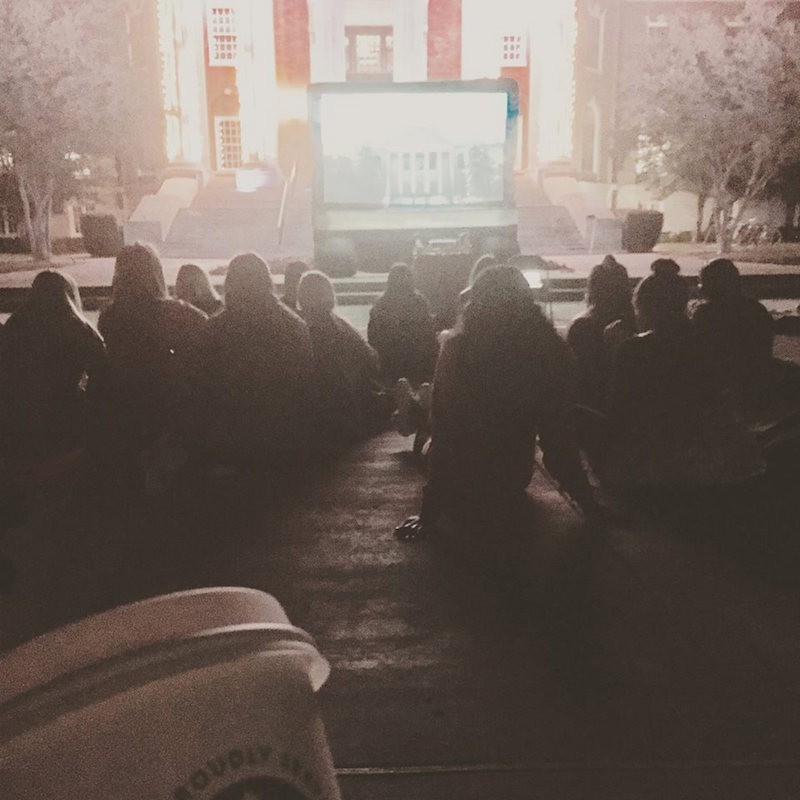 The inflatable screen stood tall in front of the glowing Dallas Hall. SMU students sat clustered in groups, eyes glued to the screen, mouths slightly gaping as more jarring stories and statistics were mentioned in the film.

Mustang Heroes, the largest run student-run service organization at SMU, partnered with Not On My Campus, a student organization focused on raising awareness about sexual assault, on Tuesday night to plan the second event in their weeklong campaign called “Heroes Week.” Throughout Heroes Week, each daily event aimed at addressing a different facet of gender equality, with Tuesday night focusing on sexual assault on college campuses.

“We all just wanted to have a discussion about what was going on on our campus and how we can make it even better and safer for the students that come here,” she said.

The night began with presentations from an SMU police officer, Sgt. Hardin, as well as the head of the counseling department, Dr. Cathy Sutter. These women expressed their support to victims and urged everyone in attendance to seek help even if they do not want to identify their attacker.

“We are worried about your safety and well-being,” said Sgt. Hardin.

Dr. Sutter expressed that the counseling center at SMU is entirely confidential and is there to walk with students through their struggles as long as they may last.

After these women offered their support and gave their contact information, students grabbed the provided s’mores and hot chocolate and settled in to watch the documentary, “The Hunting Ground.”

The movie centered around Annie Clark and Andrea Pino who both attended the University of North Carolina at Chapel Hill. Both women were raped there, and neither of them got the support they needed from their university. Instead of accepting defeat, these women decided to do something about it.

They filed a Title IX violation against their school with the Department of Education for creating a hostile environment by not expelling their assailants. Title IX is a gender equity law, and bringing in the federal government sparked a fire across the nation. Victims from campuses across the globe reached out and started telling their stories.

One after the other, women filled the screen, allowed their name and school to be shown, and shared one of the most vulnerable moments of their life with anyone willing to listen.

Some of the most renowned universities in the world, like Harvard, Yale, and Notre Dame all had women who had been raped who did not find justice in the system.

One woman in the movie said when she talked to her Dean of Students, “there was this extreme reluctance to believe me.”

Many of the victims, whether male or female, all reported that their administrators tried to blame the event on them by asking questions about their intoxication levels, their outfit choices, and their body language.

The part of the movie that evoked the biggest reaction from the audience was the Jameis Winston case at Florida State University. Jameis Winston, a renowned FSU quarterback, raped a young girl in the first semester of her freshman year. Not only was he found not guilty by both the state of Flordia and the university, but he won the Heisman Trophy while his victim dropped out of school.

“It’s crazy to see how many reports are reported but nothing really results from that,” said SMU freshman Noelle Gushard.

Since Clark and Pino filed their first Title IX case, they encouraged and helped students at other universities to file their own. Currently, there are over 100 schools under investigation by the Department of Education.

When the movie ended, there were a few moments of complete silence as students let the facts sink in. Finally, everyone broke into small group discussions where students were allowed to express their thoughts and emotions on what they had seen as a kind of catharsis.

Begala expressed that “having an open and safe space to talk about these things is important.”

Regardless of one’s motive to attend, everyone stayed until the end because, according to Begala, “seeing the firsthand accounts really strikes a nerve because you realize that could be you, that could be your best friend, that could be any one of the people you see in your classes.”