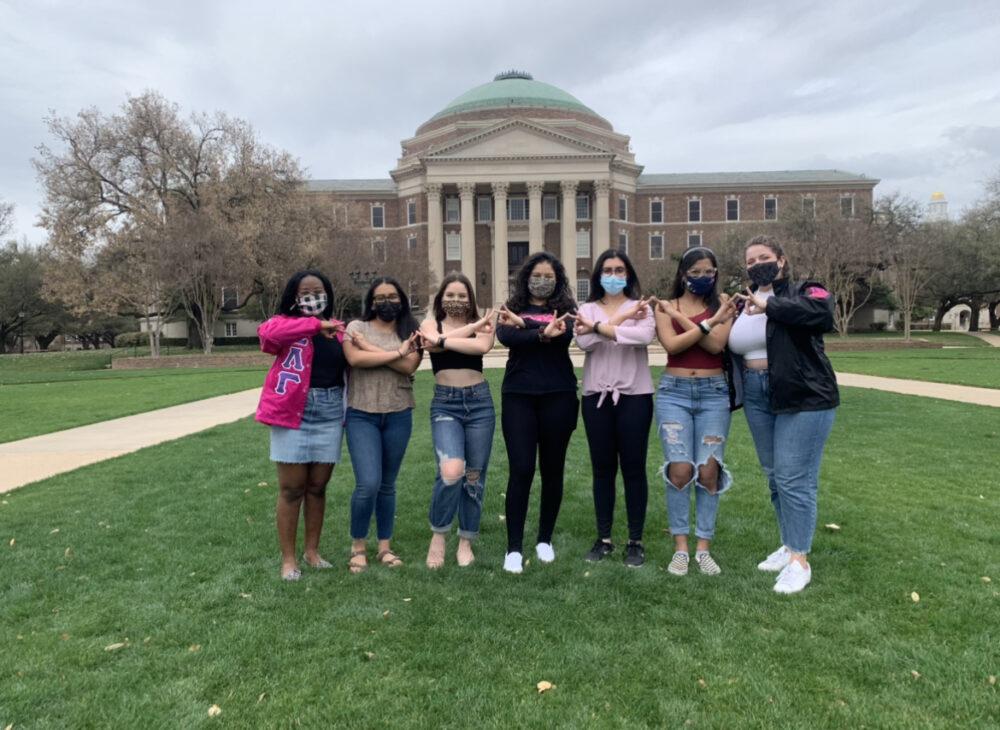 David Reichel was a freshman when he was first invited to hang out at the Multicultural Greek Council (MGC) house for “Chocolate Chill,” a Sigma Lambda Beta (SLB) event that was intriguing for obvious reasons. Reichel knew only one person at the event; but after being invited to play Super Smash Brothers for hours on end, the intimidation faded quickly.

Before this, Reichel had trouble finding a place to belong at SMU. He tried joining Program Council and a few other student organizations, but he always felt like a cog in the machine. SLB met a deep need he had: quality connections with people from similar backgrounds.

“Once I met the dudes in SLB, it was like I had a place to fit in, a place to belong,” said Reichel, now a senior at SMU.

There are countless other students like Reichel who find a place to call home in MGCs. They provide an essential community for students from diverse backgrounds at SMU, a Predominantly White Institutions (PWI).

“These groups are particularly important [at] PWI’s because it provides their membership with a community that has a shared experience,” said Ron Atkinson, Assistant Director for Fraternity & Sorority Life at SMU. He directly oversees MGC organizations.

Mahesh Ramgopal, president of SLB, said this decrease in membership is the result of two things. First, it’s natural for multicultural groups to struggle on a campus that has so few minority students. There simply aren’t enough people to have a consistent stream of new members.

“It’s very draining for members, because it feels like every year you’re in danger of dying off,” said Matthew Esparza, president of MGC.

“That number is typical from an institutional type like SMU,” Atkinson said.

The first roadblock: an anti-hazing policy created in 2018 that Esparza said “targets only cultural organizations, like MGC and NHPC.” The policy restricts the time between new member initiation and new member presentation to three days. Previously, the maximum time allowed was ten days.

MGC and NHPC organizations are the only groups that hold new member presentations, an event during which new members perform choreographed dances, called “strolls.” New member presentation is the biggest event of the semester for Sigma Lambda Beta and Sigma Lambda Gamma, two out of the three MGC groups on campus. Typically, new members will spend many hours spanning over a week rehearsing their dance routines.

“Scholarship is one of our principles, so I can’t in good conscience be like ‘yeah, screw your exam,’” Ramgopal said.

Previously, new member presentation was one of the most prominent ways they found to recruit new members. Now, because of this policy, they can no longer hold the event.

“They wanted to say they did something to prevent hazing, but I don’t see any way it would even prevent hazing,” said Matthew Esparza, president of MGC and a member of SLB.

According to the university, this wasn’t the intent of the policy.

Dr. Kenechukwu Mmeje, Vice President for Student Affairs, said the new policy was implemented in response to a series of hazing-related deaths at prominent universities in the United States. SMU conducted a review of its hazing policies, prompted by guidance from the National Association of Student Personnel Administrators, the Association for College Student Personnel, and the Council for the Advancement of Standards.

“The change was intended to reduce the likelihood of hazing within our fraternity and sorority community by encouraging these organizations to complete their new member education process as quickly as possible,” Dr. Mmeje wrote in an email.

Dr. Mmeje said the university made the decision based on conversations with advisors and students, among other things.

“While every effort is made to seek student input and involve students in the decision-making process, we may not always agree on the best course of action,” Dr. Mmeje said.

The second roadblock: the removal of the Multicultural house.

In December of 2019, MGC organizations received word that the house would be torn down, later to be replaced by the Daniel House. With little to no help from the university, Ramgopal and other MGC students were responsible to find a new housing arrangement before the next semester, less than two months later. Ramgopal spent an intensive week writing proposals for a new housing arrangement, barely sleeping or eating; by the end, he had lost 10 lbs, he said. Ramgopal said the university never created a single housing option proposal.

“The burden was put on us,” Ramgopal said. “You tell us you’re demolishing our house, you promise us an appropriate place to live, then you never give us a solution and we have to do it ourselves.”

Eventually, MGC organizations found a new place to live: four rooms in an Upper Division Housing Community called Dyer House. Reichel applied to live in the house, excited to join the community he had spent a semester visiting at the Multicultural house. It wasn’t the same.

Now, the MGC students had to share their safe place with other people. They fought to recreate the community, but it just wasn’t the same. The next year, there weren’t enough MGC students interested in living in Dyer House to reserve the space again.

“We had a shitty year in it, so no one wanted to go back,” Reichel said.

“It’s kind of the territory,” Ramgopal said. “You’d think a university that supports diversity would support organizations like this with additional financial assistance.”

Despite not having a physical space to gather, a new generation of students has found belonging at MGCs.

When Stephanie Rodrigeuz transferred to SMU as a junior, she had a hard time finding a place to call home. She found Sigma Lambda Gamma (SLG) and rushed her second semester. Rodriguez was drawn to SLG’s love for culture, history, and diversity. It reflected her life growing up in South Fort Worth, surrounded by friends from all around the world.

“I was raised where it’s primarily Hispanic and Black,” Rodriguez said. “So going to SMU was really culture shock, where it’s like primarily white-dominant. I kinda miss people being able to understand me.”

The community that Rodriguez found is right on the mark with the core mission of MGC organizations. According to the National MGC website, they tend to appeal to “college students that were biracial, bicultural, recent immigrants, or who had simply grown up with a different cultural lens that caused them to identify with or seek knowledge of other cultures.”

“Even though we are different, we can relate to each other in some type of way,” Rodriguez said.

While many miss the community the Multicultural house offered, they are still grateful to be a part of MGC organizations at SMU.

“Even though we don’t have a space to stay,” Reichel said. “As long as we have each other, we are still better off than we would be otherwise.”