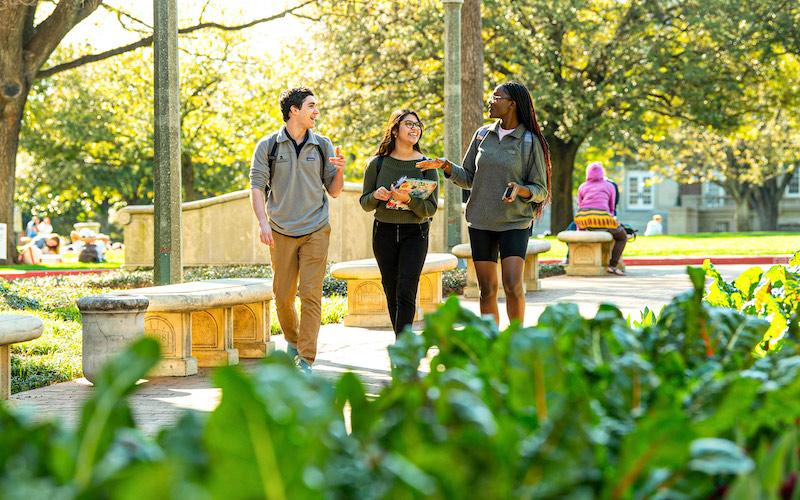 In April, after classes shifted online, chemistry and health and society major Corinne Gibson, was in a car accident just outside Memphis. She wound up in a hospital with a broken shoulder during her last year at SMU.

Gibson had a research poster due for her Engaged Learning Fellowship the next day and she knew that her tremendous pain would not let her get to it. After messaging another research fellow, word got back to her faculty advisor, Dr. David Son, who sent in a Caring Community Connections (CCC) form for Gibson.

“I was just very overwhelmed and stressed after my accident, so I wasn’t about to sit down on my computer and email a dozen people saying that I wasn’t going to be on my game that week,” Gibson said. “I think just the fact that that was all handled without me even realizing was a nice weight taken off.”

The CCC program helps students who are struggling with financial, academic and mental health issues by providing assistance or connecting them to resources. However, some students believe that the office fails to provide adequate resources for its mental health services.

The Office of Student Support was established in 2018, about a decade after the CCC Program was created. Student aid programs like the Emergency Student Fund, the Shop, mental health education and coronavirus reporting are also handled by the office.

In Fall of 2018, The Office of Student Support received 537 CCC reports and in Fall 2019, it received 575. This year the number has increased. As of Oct. 5, 328 CCC forms were filed. Currently, Elsie Johnson, director of the Office of Student Support, is the only person looking at the CCC forms. The office is unable to get a graduate assistant because of the hiring freeze and the coordinator of student support is on maternity leave.

“They didn’t really give me any help,” junior Pallavi Sridhar said. “I mean, I talked to someone for 10 minutes, and I was like, ‘Okay, cool.’ That was that.”

Multiple representatives across campus are involved with the CCC program, including officials from the Chaplain’s office, Institutional Access and Equity, and the Counseling Services.

“It is for anyone in the community to let us know if they have concerns over a student,” Johnson said. “We connect with the student of concern, get their perspective on what is going on, and then strategize with them specific resources that are available to address their concern.”

Gibson said she was thankful for the CCC program, which allowed her to focus on her recovery and also provided her with resources in case she needed them. However, Sridhar said her experience with the CCC program was less than helpful

Sridhar suffers from chronic migraines. During her sophomore year, she had a particularly rough week. She expressed her distress to a couple of people who were concerned enough to fill out a CCC form for her.

Soon after, Sridhar said she received a phone call that she described as “ominous” asking her to meet with the Office of Student Support. She said that the meeting did not help her nor was she offered any resources.

“I feel like the person who I spoke to was trying to act like my therapist,” Sridhar said. “She was asking me questions about how I feel, but wasn’t really giving me any kind of resources. Like I had to figure out that I could go talk to someone at the Health Center on my own. She didn’t even tell me that.”

For Sridhar, the one positive from her experience was that all of her professors were made aware of her chronic migraines, which she said made her feel more seen. However, Sridhar said that her overall experience with the CCC made her less inclined to use the service for herself, or for others, again.

The reasons to fill out a CCC form can range from low-level concerns, such as class attendance, to more serious ones, such as deep psychological concerns.

However, when it comes to mental health, the program often does not provide the assistance that some students say they may need.

To submit a CCC, anyone on campus, including students, faculty, and staff can go to the CCC website and fill out a form for anyone they see struggling. Individuals have the option of remaining anonymous when they fill out the forms. Those who submit forms can either submit as an informational report, which does not include contacting the student, or request outreach. After the form is submitted, The Office of Student Support determines the right plan of action to help the student.

This can take the form of an email, a phone call, or a meeting. These methods of communication help determine how the student is doing and what resources may be beneficial to them.

Johnson said that the response depends on the issue the student is facing and the office uses a risk rubric to determine how urgent a concern is. Urgent, in this case, is defined as the amount of time they give students to respond, said Johnson.

The Director of Counseling Services Cathey Soutter said that the program is a way to connect students with resources.

“It really is just an expression of concern more than anything else,” she said. “And more importantly, how can SMU help you. We have tons and tons of resources, but unless you actually need it or you have the ability to access it, you don’t really know what’s available.”

This access to resources is what helps students like sophomore Ash Thye who struggled financially. As the coronavirus pandemic gathered steam last spring, Thye became the primary source of income for his family.

“I didn’t have as much time for school,” Thye said. “I couldn’t focus on school at all because I just had so many other things to worry about like, aside from the fact that there was like all this like massive large scale horrible news, I was also trying to figure out what that would mean for my family.”

His photography professor asked Thye for permission to send in a CCC form. Thye was sent an email by the Office of Student Support that directed him to the Student Emergency Fund that offers grants to students who may benefit from them. Despite not applying for the fund, Thye was grateful to have it on the table.

“It was really nice having that peace of mind all summer because I knew that that form was there in case I did need extra support,” Thye said.

Thye acknowledges that his experience with CCCs is different from many other students because he asked for the extra support.

Other students say that the program fails to connect its resources to those who need it the most, especially for those who suffer with mental health issues.

Lindsay Lindeman, who graduated in 2019, said she wasn’t connected with mental health resources when the Office of Student Support reached out to her. During her junior year, Lindeman was struggling with anxiety and depression while also overworking herself. Her manager at the Women and LGBT center, where she worked at the time, sent in the CCC form for her.

The CCC form resulted in one email from the center. Lindeman said that responding to that email felt like just another thing on her to-do list, so she never answered. In her head, she had other, more important, things to worry about.

“I was not in the place to be taking care of myself, so it was really easy for me to ignore one email,” Lindeman said.

Lindeman said that although she blames herself for not responding, she wishes the CCC program had sent more than just one email because those with mental illness may find it hard to communicate. Looking back, Lindeman said the resources that the CCCs offer could have made her situation a little easier.

“All I could do is just kind of stay afloat,” Lindeman said. “Which is why, one email? I was like, ‘that is the least of my worries right now.’ Someone else that’s trying to help me, but doesn’t actually seem like they’re doing anything more than responding to this form that someone filled out.”

Johnson, the Office of Student Support director, said that the no-response rate for students is only about 10 percent. She also said that the office tries to look into cases more before deciding to close it.

“Our goal is not to force people into taking help,” Johnson said. “Instead what we try to do is connect people appropriately, but sometimes appropriate connection does not work with someone who is not ready for that kind of assistance.”

A junior in the Meadows School of the Arts said that she was called into the Office of Student Support after multiple CCC reports were filed about her. The student, who shared her story over FaceTime, said that she was uncomfortable with the staff member she spoke to because they acted like a therapist and told them that they are depressed.

Johnson said that the goal of the CCCs is not to provide therapy, and acknowledged that there might be some training issues to address. While other staff members have a background in counseling, Johnson is the only licensed therapist in the office.

“For a long time that was my focus for my staff. Like making sure they understand that there is a difference between the work that we are providing and therapy,” Johnson said. “I am the only licensed one and I am not providing therapy.”

The student’s experience with CCCs discouraged her from seeking counseling out of fear she would be in a similar situation as her experience at the Office of Student Support, where she felt attacked rather than supported.

Johnson said that a survey is usually sent out to after visits to the office through the CCC program, but response rates are low.

“In situations like that, where students have not had the experiences that we hoped they would have, I really wish that we could know about those things so that we can address them,” Johnson said.

Sophomore Regan Gleghorn was called into the Office of Student Support Fall of 2018 during a time when she felt as though she did not need it. Gleghorn acknowledges that in some instances CCCs can help those struggling with mental health, but sees the program as a last resort. She said that facilitating a conversation would be more valuable than a reporting system.

“Maybe a more constructive approach would be to instruct students on how to have a better dialogue about mental health with each other as opposed to passing it off to admin,” Gleghorn said.

She said that she would have preferred if her friends would talk to her directly instead of going through a formalized process. Although getting help through the CCC process is optional, Gleghorn said that it feels mandatory.

“You don’t know what they’re going to do if you don’t show up to one of their sessions because they are in a position of power,” Gleghorn said. “I think it adds a lot more stress than it reduces in a lot of cases. It would be better if students could just talk to each other.”

Many students, including Gleghorn, say that the idea of the program itself is beneficial, but in practice it sometimes falls short.

“I remember first hearing about the whole program and I thought ‘oh that’s a really great idea,” Lindeman said. “It’s meant to be there for anyone who needs it and anyone who notices what is going on. It is a great idea in theory, but in practice, it is not as effective as it could be.”