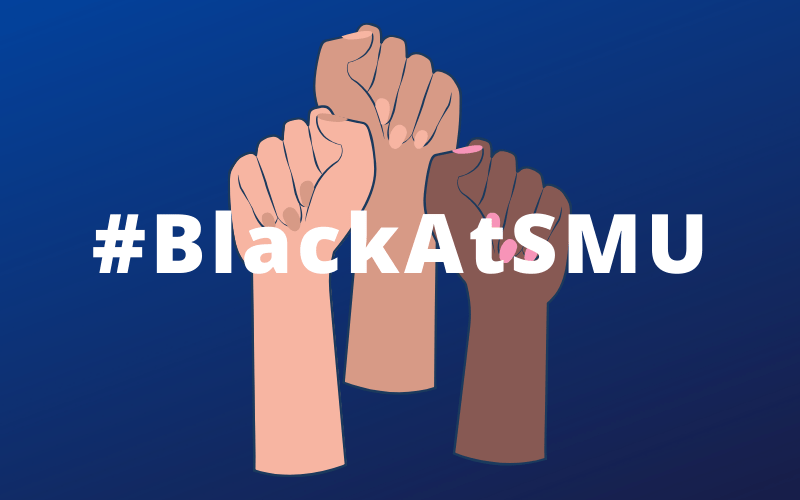 Following the killing of George Floyd and the string of protests across the nation in his honor, black SMU students took to social media to share their personal experiences through the hashtag #BlackAtSMU. The hashtag, which has a history on campus, was trending in Texas on Tuesday.

“BlackAtSMU began in 2015 where students were basically discussing their grievances about experiencing racism on campus. They had a more formal protest where they gave the school a list of demands,” said recent graduate Emem Inyang.

The 2015 protest was inspired by a similar one in the 1960s. Students staged a sit-in at University Pharmacy, a drugstore and restaurant located near campus.

“[Those students] also had a list of demands and between those two protests not much has changed,” Inyang said, “I decided to bring it back up again after President Turner’s statement.”

Inyang shared that she felt the president’s statement was not as detailed as she would have preferred, failing to directly address or mention police officers and black members of the SMU community.

The hashtag has been used to tell several stories from current students to alumnus from years past. One such Alumni is Mariah White, who came to the school in the Fall of 2015 and used the tag to share an incident she recalls from her first semester on campus.

That time “a white sorority” (we know which one it was.) told black girls why they shouldn’t bother joining Panhellenic at all. #BlackatSMU pic.twitter.com/c92vidVj7b

“[Black students] all repressed so much racism trauma from that time, it’s been very taxing to bring it all back up,” White said, “We thought maybe a girl was SO frustrated by her own rush prospects that she was taking it out on black girls because this essentially came out of nowhere.”

White says she left SMU in Dec. 2017 due to racial tensions building up inside, but not before trying to push for social change on campus.

“[Black students] put a lot of effort into laying the groundwork for a plan we thought could go somewhere,” White said.

“[SMU] hijacked it, dismantled it, made it a paltry advisory board and a sorry excuse to have lunch together every couple weeks, and decided to try and make money off it and call it CIQ@SMU to make it palatable for white people,” she said.

“[SMU] hijacked it, dismantled it, made it a paltry advisory board and a sorry excuse to have lunch together every couple weeks, and decided to try and make money off it and call it CIQ@SMU to make it palatable for white people.”

CIQ and other similar diversity programs on campus have received criticism from students of color, like Inyang and White, who believe they are weak attempts by the university to address the issue.

“The biggest lesson I learned from leaving SMU is that there is a difference between being merely tolerant and being genuinely accepting,” White said.

Junior Bethany Bass joined in on the hashtag to share what she felt is a common issue for black students with cars on campus.

“I have been followed by SMUPD when I drive my car without my SMU sticker,” Bass said, “I have an older car and when they follow me it is their way of telling me I don’t belong there.”

Bass shared that she has several stories about her experiences on campus and feels like micro-aggressions are embedded in SMU’s culture.

“As a black student I want our administration to take the demands of the original BlackAtSMU movement seriously,” Bass said, “What they are doing is not enough.”

Bass also shared that she feels like the “burden” of hiring more black professors, recruiting more black students, and condemning hate speech on campus should not be placed on students.

The hashtag also featured stories from students such as junior Ryan Ehigiator, who had similar experiences early in his SMU career.

I like this game!
I’m the only black person in a room with lots of other white people, white dude walks in and says “what’s up my niggas!” He sees me and then covers his mouth, pretends to act embarrassed. The apology was… there was no apology #BlackAtSMU https://t.co/nNGcmMJ2ub

“The situation happened summer of 2018 at AARO, when I was an incoming freshman,” Ehigiator said, “All I did was tell the dude to watch his mouth, I didn’t really want to cause any problems before school even started, especially being the only black person in the room.”

According to SMU’s most recent (2019) campus profile, ‘Black or African American students make up 6.1% of the school’s student population compared to their white counterparts who make up 58%. This ratio of black to white students mimics a similar ethnic distribution on campus in 2016 when alum, Chandler English came in as a transfer student.

being one of the few black people at smu took such a toll on my mental health. i constantly questioned my self worth, felt invisible, felt i had no support. i’m trying to think back on my experience & my mind has blacked out any memories attached to that school #BlackatSMU

“It’s something I’m still having to deal with now,” English said, “Trying to get out of the thought process of feeling like I’m not good enough or that I belong and things like that.”

The experience left English with a lot to unpack and reflect on, giving her a new view of what SMU can do in the future to shape a more positive environment for their black students.

“I think SMU really loves to put out blanket statements of them supporting black students and students of color but it ends up being so broad that the main original focus is not seen,” she said.

“I think SMU really loves to put out blanket statements of them supporting black students and students of color but it ends up being so broad that the main original focus is not seen.”

English feels like having more black professors on campus would be beneficial to black students in order to help them feel more supported and understood on campus. She also suggested that the school do better about funding minority student organizations and their events.

“The things that [administration] thinks they’re doing is just lightly touching on [the issues],” English added, “It’s a hard thing to express and for other people to try and relate to it when they haven’t been in [black students’] shoes.

Given the racial tension and the climate of recent events, English shared that she wants the voices of black students to be heard and recognized regardless of the pressure in this specific time in history.

“These are stories compiled over years. This has been going on, we have been saying these things, we have been wanting to be heard,” English said.

“These are stories compiled over years. This has been going on, we have been saying these things, we have been wanting to be heard.”

The hashtag has started similar conversations at other universities under the hashtags #BlackAtUNT and #BlackAtMizzou. Students hope to bring awareness to the black experience on college campuses and prompt positive change going forward.

“I think it’s great that lots of students, past and current, are sharing their stories. It might make SMU administration open their eyes to the issue at hand, instead of turning away and ignoring it like they have been,” Ehigiator said.

“I hear the pain and outrage expressed by our students and alums through the Black@SMU social posts and am preparing a message for our campus community with some initial steps,” President Turner commented for The Daily Campus.