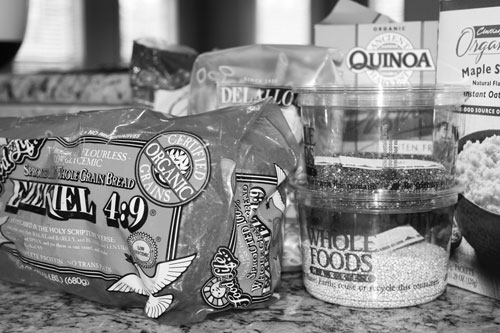 The refined foods sound more typical to the life of a college student, but some people try to take the healthier route.

“If there is an option to eat whole wheat, I usually take it because it’s supposed to be the healthier choice,” said junior Adriane Bradway said.

Students try to buy the healthier choices when they are available, but going out of their way to keep their refined grain intake is not as common.

Some easy ways to eat servings of whole grains are swapping quinoa for pasta, steel-cut oats for refined breakfast cereals and brown rice for white rice.

Also, students should look for cracked wheat or whole grain breads instead of white breads.

The Tufts study examined data from the Framingham Heart study, which included 2,834 men and women, ages 32 to 83.

Participants were accessed using a food-frequency questionnaire and researchers compared grain intake with amount of belly fat, according to the study.

The study also revealed that those who were told to eat three or more servings of whole grains and keep their intake of refined grains to less than one serving daily averaged a 10 percent lower visceral adipose tissue (VAT) volume, which is essentially belly fat.

Researchers are also finding that people are not getting enough whole grains.

According to Mintel, a market research organization, 2011 will have the most whole grain product launches ever.

Mintel credits the Whole Grains Council for this increased awareness, as it launched a stamp-labeling program in 2005, according to the Tufts University Health and Nutrition letter. Since then, more than 3,700 whole grain products have been introduced to the market.

Posted on March 9th, 2011 by Katie Tufts
ShareTweetShare on Google+Pin on PinterestSend with WhatsApp

Religious beliefs are often incredibly influential in shaping how we interact with the world. For President Turner, Christianity has fundamentally changed the way he leads. END_OF_DOCUMENT_TOKEN_TO_BE_REPLACED

Find out the results of the nail-biting midterm elections.... END_OF_DOCUMENT_TOKEN_TO_BE_REPLACED