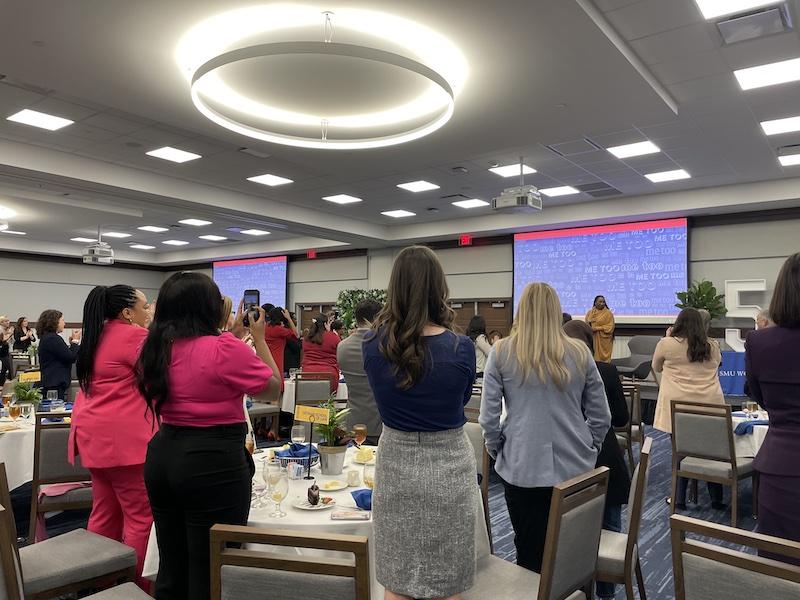 Tarana Burke, the original founder of the Me Too movement, spent years helping young girls of color work through their sexual trauma before fully grappling with her own. Now, Burke sees it as her duty to other women of color who survive sexual violence to speak openly about her own experiences.

“I was deathly afraid of my story, still. I was trying to run away from it” Burke said of her time working with young female students. “I said, ‘God don’t do this to me’…But the assignment is the assignment at the end of the day. And I realized my freedom was inextricably linked to theirs.”

This year’s symposium theme, “Lift As We Climb,” particularly highlighted Burke’s work to center the voices of Black and brown survivors in discussions of sexual violence.

“What Me Too going viral did was change the trajectory of the narrative around sexual violence. But the thing is, when Me Too went viral the voices that rose to the top didn’t look like me,” Burke said. “[Girls of color] had to see somebody else besides these A-list Hollywood women and they had to hear another story.”

After the Q&A, audience members had the opportunity to ask Burke more about herself and her autobiography “Unbound,” which details her life and the lead-up to her creation of the Me Too movement. Audience members not only thanked Burke for her work, but also opened up about their own encounters with systemic injustice and sexual violence.

“I was one of the 12 million,” one audience member told Burke, referring to the 12 million people who shared their story of sexual violence the day #metoo went viral. “Your book freed me…You gave me bravery. It gave me dignity within myself.”