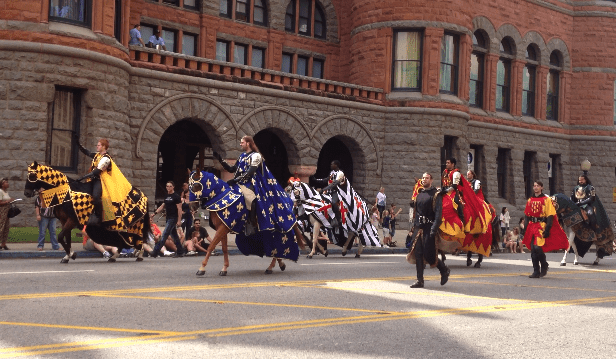 The Texas State Fair kicked off at noon on Friday with its opening day parade in downtown Dallas. Mayor Mike Rawlings served as grand marshal.

Cultural groups and high school marching bands were represented in the parade, and Big Tex’s 60th birthday was celebrated.

The parade started on the corner of Main and Houston streets and ended at Good-Lattimer Expressway. Hundreds of people of all ages lined the parade route, returning waves to princesses, clowns, and marching bands.

The parade featured ten floats, all approved months in advance. According to Head of Special Events Department and Dallasite Lisa Bouble, the planning gets started when the theme for the fair is decided. This year’s theme was “Big and Bright.”

“The concept for the parade starts in January when we get the theme,” said Bouble. “We go back and forth with sketches with South West Parades Company and the actual building begins in the summer.”

The parade held true to its theme: floats with jungle and under-the-sea themes dazzled in neon colors, while thumping marching bands, baton twirlers, and Texas line dancers kicked up their cowboy boots behind each float.

About ten riders dressed like Elvis Presley zipped around on their motorbikes, whirling in circles as children clapped and screamed. They sped up, popped wheelies and circled back to do it all again, white capes flapping in the wind.

“They’re not Disney princesses but they are really pretty,” she said.

The parade was sponsored by Reliant Energy.

Bouble, 48, said she has gone to the fair every single year and has spent the last 13 working on the parade. “I’ve been coming to the Texas State Fair my entire life,” she said. “My mom came here when she was pregnant with me in October and I was born that September.”

Part of being involved in the parade’s production includes deciding which float makes the cut. Bouble said she looks for “variety, originality and entertainment value and how would it be appealing to the crowd.” She likes the floats to be family wholesome and does not accept any political or religion themed floats.

“I thought I knew about the fair having gone all those years, but I’ve gotten to love it even more and get a whole new perspective working on the inside,” Bouble said. “For me, it’s in my blood.”