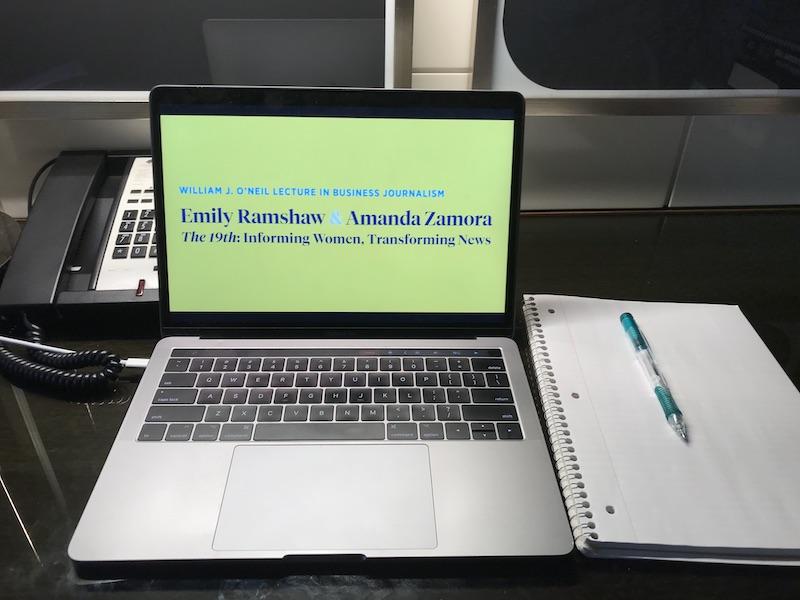 The 19th* is a nonprofit news organization founded in part by Emily Ramshaw. The 19th* was launched in 2020 right around the start of the COVID-19 pandemic. Despite the downsides and upsets of starting virtually, the 19th* has flourished as a media entity largely through their online efforts.

Ramshaw recently spoke at the 2021 O’Neil Lecture. SMU professor Jake Batsell opened the lecture by introducing the program, Ramshaw, and the 19th* as a budding new media endeavor.

“I will tell you that The 19th* is one of the most exciting new entrepreneurial experiments in the entire American media landscape,” Batsell said. “. . . [It creates] an inclusive and empowering newsroom culture and constantly publishes courageous and groundbreaking journalism that explains and humanizes the pandemic’s disproportionate economic impact on the communities that The 19th* is serving.”

As a nonprofit, The 19th* primarily gains revenue from individual philanthropy, foundational philanthropy, corporate underwriting, membership, and live events. Ramshaw listed the need for journalism to be free to consume and free to republish, along with the necessity of world-class benefits and competitive salaries for staff members, as reasons for the nonprofit model.

With the original launch being right around the start of the pandemic, The 19th* has strived to create a community embracing diversity. In particular, they mentioned the usage of “callouts” online to find new stories and narratives. The co-founders also touched on the success of their virtual events in drawing an audience, especially through appearances from celebrities and public figures such as Meryl Streep and Meghan Markle.

The 19th* has used their platform to cover a wide variety of topics over the past year. Major pieces from the nonprofit include stories focusing on the Lincoln Project, the effects of the pandemic on the women’s workforce, and Kamala Harris’ relationship with the LGBTQ+ community.

Ramshaw emphasized the importance of accessibility, particularly in political conversations. To that point, the two women focused on the expansion of The 19th* to cover LGBTQ issues alongside coverage pertaining to women and communities of color.

For more information regarding The 19th*, see their website.