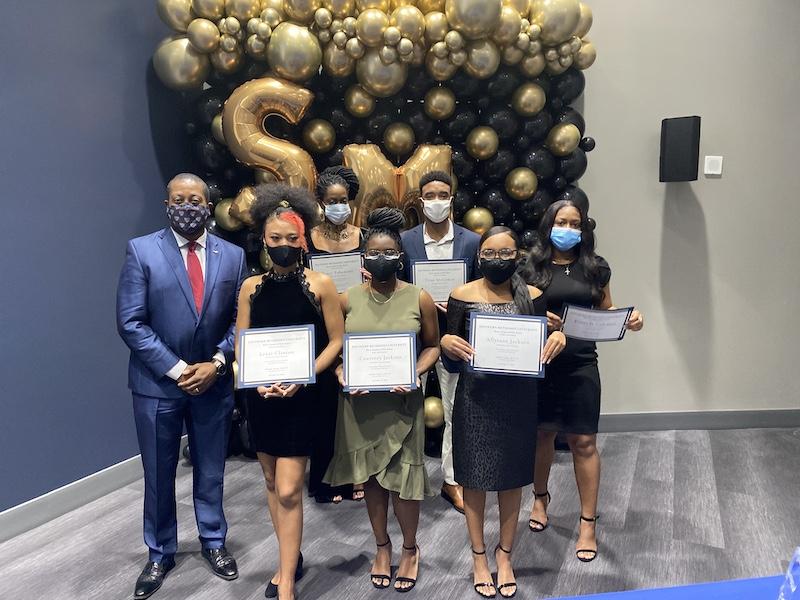 “What will truly make you happy is the legacy you leave in the world,” said Dawes, the first female, Black American gymnast to win an individual Olympic medal and an Olympic gold medal as a member of the dominating Atlanta Magnificent Seven in 1996

ABS event coordinator, sophomore Kennedy Coleman, noted that the event was especially important for its recognition of the often overlooked contributions that Black students make at SMU.

Coleman also said that Black SMU faculty are especially likely to go unrecognized for their work and support of Black students.

Black students and faculty continue working toward lasting change at SMU and building a support system for the Black students that will come after them. Event attendees and award recipients expressed that the recognition of each class’s contributions is critical towards these efforts.

“It’s very humbling, honestly, to have been selected by the event board,” David S. Huntley award recipient, junior Abena Marfo shared. “It’s kind of a torch to pass on, and I hope to continue to be a role model at SMU.”

The awards ceremony began with awarding seven exceptional Black SMU students with the Black Alumni Scholarship. The following students were awarded for their leadership and community involvement on SMU’s campus, as well as their merit.

The awards ceremony concluded with the recognition of five remarkable Black women, four SMU students and one SMU faculty. The following women were recognized for the incredible impact they have had both in and beyond the SMU community.

This award recognizes a student that selflessly serves the SMU community and carries it forward with integrity.
Recipient: Nia Kamau
– Class of 2022; Human Rights and International Studies, Tower Scholar
– Co-Director of the Champions Mentorship Program

This award recognizes a student who consistently demonstrates activism both on the SMU campus and in the local community.
Recipient: Tyne Dickson
– Class of 2022; Theatre and Public Policy, Tower Scholar
– Brought Black Lives Matter to SMU

This award honors a member of the SMU community who consistently demonstrates their ability to go above and beyond through his or her leadership on campus.
Recipient: Abena Marfo
– Class of 2022; Human Rights, Sociology, Health & Society

This award honors an African-American student who exemplifies excellence both on and off the field.
Recipient: Bri Tollie
– Class of 2022; Political Science and Human Rights
– SMU Women’s Basketball
– Co-founder of the Black Student-Athlete Committee at SMU