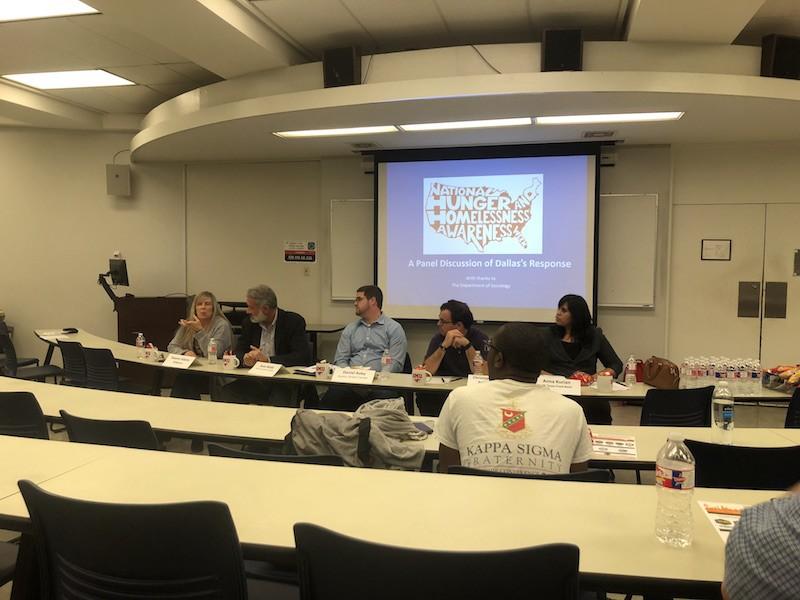 Without technology, the homeless have no method of finding jobs. This leaves them with no option of ever getting off the streets.

“One day you’ll be applying for jobs, imagine how hard that would be without internet…at some point you would feel isolation,” said chairman Kenn Webb of the Dallas Citizen Homeless Commission.

Webb is one of the panelists who spoke at SMU on Nov. 14 about the problem of hunger and homelessness in Dallas. The Department of Sociology welcomed the following representatives from poverty-fighting organizations: Deanna Adams from CitySquare, Kenn Webb from Dallas Citizen Homeless Commission, Daniel Roby from Austin Street Center, Christopher Lydick from Bonton Farms and Anna Kurian from North Texas Food Bank.

Panelists began the discussion by giving the audience of sense of how the homeless population feels.

“They really want to be treated with respect. They want dignity and they want to know somebody cares about them,” said Webb.

However with Dallas’ growing homeless rate, even if every person without a home were housed tonight, there would be more in need of a home tomorrow, according to the panelists. This is one of the many problems Dallas faces when responding to the issue of homelessness.

Last year there were 30,000 evictions in Dallas, which forced many people to live on the streets. There is a severe problem of affordable housing in Dallas; however, inclusionary zoning is banned in the state of Texas. This means that there is no allotment to affordable housing for low-income families. In cities like Washington, D.C. and New York City, there are laws that force the city to have a certain percentage of affordable housing.

Another major problem is the way the community categorizes the homeless, said the panelists.

“It’s a strange subject that we classify someone based upon their housing status and then decide what are we going to do with ‘them,’” said Roby.

But the categorization doesn’t stop there — they are further labeled by race. Seventy two percent of the people that receive help from the Austin Street Center are African American, and Dallas’s population is 25 percent African American. There are clear issues with race that need to be addressed, according to Adams.

“It’s a dialogue that within our system, were trying to have. Of course, there’s a lot of emotions and feelings that go into it,” she said.

Adams said she has felt racism first-hand when she and her biracial daughter shop at their local Wal-Mart.

“There’s a man at the door who checks everybody. If I go through, he doesn’t check me. If my daughter goes through, she gets checked,” said Adams.

In addition to judgment from their color of skin, they are also judged by substance abuse disorders and criminal records, which hinders them from finding shelter.

Webb put the issue in perspective: “should someone in Highland Park be kicked out of their house because they’re using drugs?”

The United States incarcerates more people than any other country, so it only makes sense that the homeless population is similarly high.

Roby told the story of a man who recently stayed at the Austin Street Center. He had been in prison for the last 35 years after being caught with two ounces of cocaine. Now, he has nowhere to turn — or live.

“He spent his entire adult life behind bars. What exactly do we expect him to do? Is he going to get a job now and rent his own place? It’s not going to happen,” said Roby.

So how can SMU students play a part in aiding the homeless population in Dallas? Panelists bounced ideas off of each other. Roby suggested building a relationship with a homeless person at the Austin Street Center. Lydick advised serving the homeless at Bonton Farms as a volunteer. Either way, understanding a homeless person’s point of view is the best way to have a role in helping the Dallas community, they said.