According to a report published by the Equal Justice Initiative, the legacy of racial terror and lynching in America is a topic that is directly connected to the complex and ever evolving systems of “mass incarceration, excessive penal punishment, disproportionate sentencing of racial minorities, and police abuse of people of color.”

This same report lists 344 lynchings of African-Americans occurred in Texas between the years of 1877-1950, with Anderson county ranking 13th, with 22 victims, on the top 25 list of counties with the most lynching victims.

Terry Baker, who served 39 years as assistant chief deputy of the Dallas County Sheriff’s Department, began his research on cases of law enforcement officers killed in line of duty shortly after he retired. Pivoting from this starting point, he then compiled 17 years worth of research on the hangings and lynchings that occurred to black men, women, and white men in Dallas County from 1853 to 1920, which ultimately became the core of his book: Hangings and Lynchings in Dallas County, Texas 1853-1920.

In the quest for information about lynchings that occurred in Dallas, a basic search will point to Allen Brooks, a black man who was accused of raping a three-year-old white girl, lynched on the corner of Main St. and Akard St. in front of a crowd of over 5000 viewers. Yet, after extensive research using Baker’s book, as well as archives and materials from the J. Erik Jonsson Library, 28 names and stories appeared.

Lynching: To be put to death, almost always including methods of torture, usually but not limited to hanging, by a person, group of people, or mob without legal approval or permission.

Hanging: A method of execution used by the state after a guilty verdict decided during/after a trial. Typically a rope is suspended around the neck, a black bag is placed over the face, and the victim falls through a trap door.

The first person to ever be executed in the state of Texas was a black female slave by the name of Jane Elkins. Elkins was convicted for the murder of her white master, splitting his head open amid his attempt to rape her. She is the only female listed in Baker’s text. Elkins was hanged May 17, 1853.

There are some discrepancies with the exact location of her hanging and many others in Baker’s research seeing as though the layout of the city of Dallas changed significantly between 1853 and 1920, and is continuing to change to this day. There have been no records found that indicate the address or cross streets of where the Dallas County Jail was in 1853 when Elkins was hanged on the courthouse jail yard. From a series of archive maps located in the J. Erik Jonsson Library, there is a marking of the Dallas County Jail on the corner of Main St. and Houston St., a location that remained fairly consistent between the years of 1901 and 1915.

“Uncle Cato” Miller, Patrick Jenkins, and Samuel Smith were three black slaves suspected of arson and the burning of downtown Dallas. All three were lynched on the bank of the Trinity River, which met at the foot of Main St. at the time, but resonates more closely today near the triple underpass and Dealey Plaza. Miller, Jenkins, and Smith were hanged July 24, 1860.

Josiah Record, a white man, was lynched by a mob near Keenan’s Crossing in Irving, TX, on August 13, 1861 for allegedly making statements that the South did not have enough money or supplies to win the Civil War. Eight years later, two of his sons, John Record and Silas Record, along with two other white men, William James and Thomas Barkley, were lynched on August 25, 1869, near Hackberry Creek, two miles west of Keenan’s Crossing, after being suspected of stealing cattle and horses.

Reuben Johnson, aka “Rube,” a black man, was lynched December 27, 1874 near Mountain Creek in the southwest area of Dallas County for no offense. He was simply a victim to the witnessing of a murder and his unwillingness to comply with the suspect’s alibi is what got him killed. 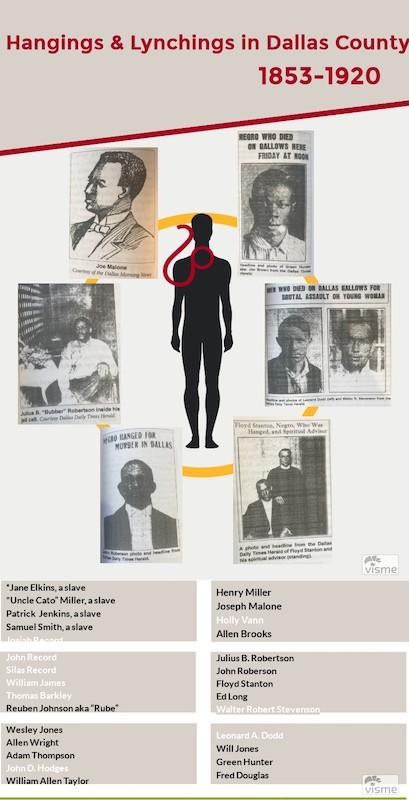 Allen Wright, a black man, was hanged on “Hangman’s Hollow,” the location of gallows that were north on Houston St. at the time, but a location that today would be just above the Texas & Pacific bridge, in the Trinity River bottoms. Wright was hanged August 27, 1880 in front of a crowd of 5000 for murder and was tried by an all black jury.

Adam Thompson, a black man, was hanged July 1, 1881 on the west side of the Dallas County Jail for robbery and murder.

John D. Hodges, a white man, was robbed and lynched near Miller’s Ferry Road, two miles from Hutchins, a city in southern Dallas county on August 4, 1881 for no offense. He did not die from the lynching. Hodges managed to escape his binding and reported the crimes committed against him.

William Allen Taylor, a black man, was tried and convicted of burglary and criminal assault. Due to the fact that mobs were after him and constantly threatening to remove him from the county jail, Taylor was scheduled to be transported to the the jail in Waco. On their trip south, Taylor and the two sheriffs that were accompanying him were seized by an angry mob. Records say it was either a bridge or a nearby tree, west of the Trinity River, where Taylor was lynched on September 12, 1884, when the mob brought him back to Dallas. After witnessing the lynching, the two sheriffs were released by the mob unharmed. Taylor, along with Allen Brooks, whose story will soon follow, are the only two names listed on the Dallas County plaque in the National Memorial for Justice and Peace, the first ever lynching memorial dedicated to the legacy of racial terror in the South, founded by the Equal Justice Initiative.

Henry Miller, a black man, was hanged July 28, 1893 in the Dallas County Jail stairway for the murder of a police officer. Records from The Dallas Morning News show he was a descendant of “Uncle Cato” Miller who was lynched 33 years prior.

Joseph Malone, aka “Dobie or Dobra” was hanged September 2, 1898 for rape and attempted murder in the Dallas County Jail.

Holly Vann was the first white man to be hanged in the Dallas County Jail after being convicted by the state on May 12, 1905 for robbery and murder. All other white men prior to Vann had been lynched by mobs.

In February of 1910, Allen Brooks, a 65-year-old black man, was found in the loft of his white employer’s home with their three-year-old daughter who had been missing for about four hours. Records say that after examining both the toddler and Brooks, he was charged with rape. On March 3, 1910, Brooks was pushed out of the window of the Dallas County Courthouse, which is the site of the Old Red Museum today, by an angry mob who dragged him with a rope tied around his neck and stomped his head in for nearly half a mile before lynching him on a pole next to Elk’s Arch. A crowd of over 5000 attended his lynching and children tore pieces of his clothing off of his mutilated body to take home as souvenirs.

Julius B. Robertson, aka “Bubber,” a black man, was hanged in the stairwell of the Dallas County Jail on May 13, 1910 for attempted murder and robbery.

John Roberson was hanged for murder, assault, and robbery in the Dallas County Jail. A crowd of 600 gathered in the rain to watch his hanging on January 10, 1913.

Floyd Stanton was hanged August 1, 1913 for murder at the Dallas County Jail.

Ed Long was the last to be hanged at the Dallas County Jail before it was relocated to 505 Main St. and opened in 1915. An annex to the jail was built in 1955. Long was hanged December 19, 1913 for murder of a special officer.

Walter Stevenson and Leonard Dodd, two white males, were hanged May 24, 1918 at the new Dallas County Jail for kidnapping and criminal assault. A crowd of 1500 gathered on the courthouse lawn to hear the verdict of the trial.

Will Jones, aka “Webb Nickerson,” a black man, was hanged for rape and murder on July 22, 1918 at the Dallas County Jail.

Green Hunter, aka “James Brown,” a black man was hanged in front of a crowd of over 200 people on July 9, 1920 for criminal assault and robbery.

Fred Douglas, aka “Jobo,” a black man, was the last person to be legally hanged in Dallas County on August 27, 1920. The Dallas County Jail on Main St. closed in 1967 and the new government center jail opened on 600 Commerce St., which is now the George L. Allen, Sr. Courts Building. According to Baker’s text, following the hanging of Douglas, “in 1923, the Texas State legislature passed an act requiring all legal executions to be held at the Texas state prison in Huntsville. This is where “Old Sparky,” the electric chair began and killed 361 prisoners by electric shock in the next 40 years.

The legacy of lynching has modern day roots in the prison system, and has evolved into the mass murdering of black bodies, specifically male, by white police officers. In an interview with Jennifer McNabb, a doctorate student at SMU and one of the leaders of the Human Rights Research cluster, she detailed this linkage:

“I see more clearly a connection between the lynchings in the past with the killings of young black men by both police and other citizens with impunity in the present. Trayvon Martin, for example, killed by a Florida citizen in 2012, and the killing of Jordan Edwards in Balch Springs in April of 2017. – Jennifer McNabb

McNabb revealed that the cluster will feature an upcoming human rights event on the shooting of Jordan Edwards at SMU on September 26, 2018.

Lynchings have no ended entirely. In April of 2018, news reporters described the deaths of two black men, Alize Smith and Jarron Moreland, who were found dismembered and chained in an Oklahoma City pond, as a modern day lynching. In addition, just a couple days ago, August 2, 2018, a group of boys admitted to hanging a black baby doll from a noose in a Philadelphia playground. Neither story got much coverage.

This isn’t history, the legacy of racial terror and lynching continues and is ever present in our society today.

A Black baby doll found hanging Thursday from a noose in a Philadelphia playground was staged as a prank by a group of kids. @Phillytrib's @AyanaJones22 has details. https://t.co/8V9SETj6kz pic.twitter.com/gvRTDKS1fG