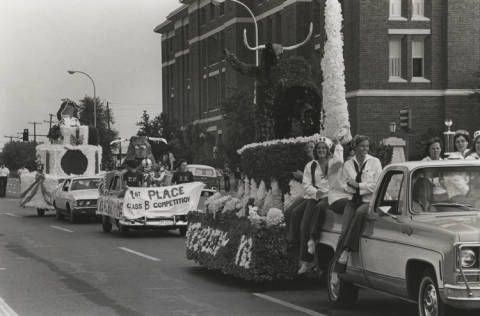 The sun sets as students work away in an almost empty parking garage. Between cups of hot chocolate and chat breaks, men cut wooden structures and hammer them in place while women stuff colorful tissue into a wire base.

“It’s one of the only events at SMU where alumni, faculty and staff all come together to celebrate this amazing school,” he said.

Throughout the course of the week student organizations participate in a number of competitions for points. Some of the events include banner painting; “canstruction”, in which teams build structures only using canned goods; and field day, where teams compete in physical, outdoor activities. The week ends with a parade on Saturday where the organizations present their floats, followed by the Homecoming football game.

The past 87 years have included traditions that are no longer around, like a bonfire, school dance and a friendly game of freshmen vs. upperclassmen tug-o-war. There was a year when two Homecoming queens were crowned, one without parade floats, and even a few years with no football.

The first Homecoming took place in the spring of 1920. As football is a fall sport, this was one year when the celebration did not center around the game. SMU archivist Joan Gosnell said that it instead served as an opportunity for alumni to return to their alma mater.

“The alumni want to see their old friends and the university,” she said. “They want to remember their old times.”

In 1986 the NCAA punished SMU for illegally paying their football players. In what is now called the “Death Penalty,” the football program was cancelled for two years (the 1987-88 seasons). For those two seasons, Homecoming focused on soccer instead. The head of public services for SMU’s DeGolyer Library Pamalla Anderson was on campus during those years.

“The festivities were all centered around soccer, which seemed odd,” Anderson said, “Our soccer team was really good back then, so it was nice to have more attention focused on the sport than it would have normally gotten.”

After the “Death Penalty,” school spirit surrounding Homecoming was at an all-time low. In response, Homecoming organizers in the early 90’s worked to create new traditions to increase student participation. Now, every Homecoming chair adds something new.

“Every year the Student Foundation Homecoming Chair makes a few changes to leave their mark,” said Agadoni. “This year, we completely changed the format of Field Day so that teams no longer compete one-on-one, but rather compete against each other in an “Amazing Race” type event.”

While many traditions have come and gone over the last 87 celebrations, some have stood the test of time. One of these traditions happens to be Agadoni’s favorite part of Homecoming – the floats.

“Teams put so much hard work and time into making these incredible structures and I think it is great to see them showcased before the Homecoming football game,” he said.

The floats are made in an empty parking garage across from the Park n’ Pony building on SMU Blvd.

Floats have been a staple at every Homecoming since at least 1938, with one exception. No floats made an appearance in 1942 due to World War II rations.

“There was gasoline rationing, tire rationing. The university didn’t want to waste those things on such a frivolous event,” said archivist Gosnell.

Another tradition that has stood the test of time is the Homecoming Queen. 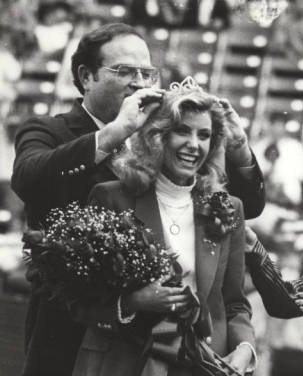 In the 60’s nominees modeled in a campus fashion show, and in 1965, for SMU’s 50th anniversary, the ladies entered the football field in a float modeled after an anniversary birthday cake.

But the 1970 race for queen was the most controversial, when not one but two queens were crowned.

According to the Dallas Morning News, the first queen was Dallas native and math major Sally Holland. After her win was announced, the Black League of Afro-American and African College Students (BLAACS) demanded an opportunity to present their queen, which they were previously denied.

After much debate among the alumni and administration, BLAACS was allowed to present their own queen, Jacqueline King.

SMU alum Paige Evans was crowned Homecoming Queen in 2012. In a Facebook message, the Kappa Alpha Theta member described the moment as one of her fondest memories from SMU.

“I was overwhelmed with emotion! To be cheered on by a stadium full of people and given the honor of SMU Homecoming Queen – it was certainly the highlight of my college career at SMU,” she said.

This year’s Homecoming parade starts Saturday at 4:30 p.m. with a 7 p.m. kickoff against the University of South Florida.