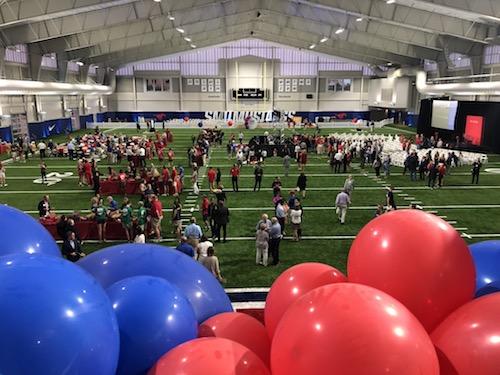 It took years of planning and construction, but the Indoor Performance Center is finally open.

The new facility had its official unveiling at the dedication ceremony this past Friday, Sept. 6. SMU’s band and pom squad kicked off the event as a buzzing crowd of donors, community members and students celebrated the grand opening. SMU’s President R. Gerald Turner welcomed the audience with a speech.

“If you come in the front part of the building, you’ll see a sculpture called ‘The Spirit of Peruna,’” Dr. Turner said. “It’s composed of individual pieces of metal bonded together permanently, and it reflects the essence of the pride and strength of the Mustangs when we come together in a united way to build, to win, and to shape world changers.”

The enormous size and grandeur of the Indoor Performance Center also exemplified just how much Mustangs can accomplish when we come together. Bill Armstrong and Liz Martin Armstrong came together with dozens of other generous alumni to contribute a total of $27 million for the facility.

“It’s special,” Director of Athletics Rick Hart said. “These projects are special in part because of the coming together of alumni and donors and campus constituents and a great number of people and architects to bring this to fruition.”

“I would hope that, over a period of time, nearly every student would have some activity in here that they would come to,” Dr. Turner said.

The Armstrongs emphasized in their speeches that the Indoor Performance Center will be used not only by athletes but by the whole SMU community. Aside from the practice field, the IPC has a recruitment lounge and a banquet hall, making the facility multifunctional. The building has already received positive feedback from freshmen students who got an early glimpse of the building during Night at the Club on Saturday, Aug. 24.

“As freshmen, we got to see this building first before, I think, a lot of people,” freshman Sophia Zuckerman said. “It was great to have a fair sort of setting.”

“Facilities are a visible, tangible sign of commitment,” Hart said. “You can’t walk into this facility and question our commitment to competing at the highest level.”

There is no doubt that the latest addition to the campus landscape adds a new element of clout to SMU’s athletics. But more than that, it provides a new space where all students and locals can gather as a community. Just like Dr. Turner said in Friday’s speech, the Indoor Performance Center represents the community on such a grand scale, it seems impossible to ignore.