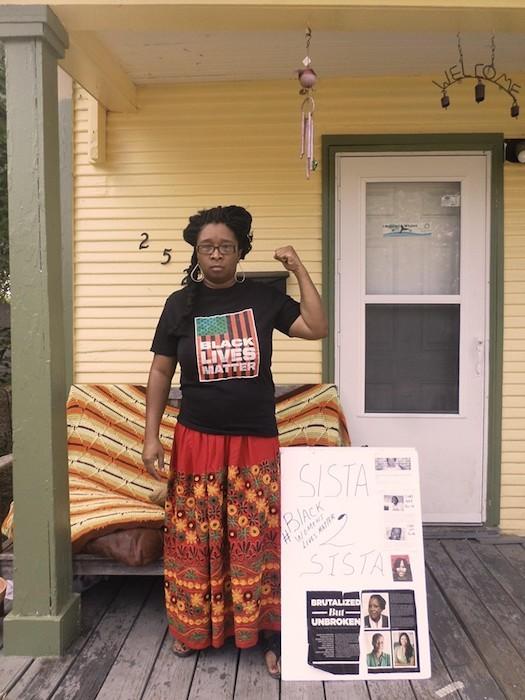 Olinka Green sat in a conference room at SMU gazing out the window at a beautiful, bustling campus.

She never expected to have this opportunity, having looked out of a small, barred-up prison window just years earlier.

An organization called the Women of Color and the Power of Narratives Research Cluster invited Green to share her story. The women organized Green’s visit to campus last month, where they would get to hear about her involvement in the fight for black rights. However, their previous knowledge of Green’s life could not have prepared them for the astonishing stories she told. Green began by warning the group about the difficulty of her stories and the emotions they stir.

“My journey has been one of question marks, dark places, low places, high places and places I never thought I would see,” Green said.

She grew up with a heroin-addicted mother who spent 32 years in and out of prison for drug abuse and robbery. Green often did not see her father, who also lived a violent and drug-addicted life.

“I knew why I had to watch my mom and dad shoot up heroin when I was four years old. It was so I would grow up and do something much better than that,” Green said.

She did not want to follow her parents’ footsteps, so she became infuriated when the court sentenced her to five years in prison. They convicted her for hitting her children’s father whom she said had been abusing her for months.

“Black women would need the best lawyer in the world to win a domestic violence case,” Green said.

She became her biggest fear: the mother that only saw her kids from the prisoner’s side of a glass wall.

Once released from prison, Green received her GED and enrolled in community college. She wanted a diploma not just for the certification, but to finally feel like a human.

Green said she could not get a job because nobody wanted to hire an ex-convict living on the streets with children. But one day a woman approached her and offered her a job at a reception desk that paid $1,000 per week. Green’s life began to turn around.

While leaving work one day, Green ran into members of the New Black Panther Party who welcomed her in immediately. Green, a survivor of sexual violence, said that with the Black Panthers, she felt safe around black men for the first time. Their dedication to black rights inspired Green, and she became a passionate black rights activist. But this new life consumed her.

“For activists, the world and the cause become our life, our love,” Green said. “There isn’t time for our own children or husbands because we are constantly fighting for others.”

Green fought hard for others July 7, 2016, when Micah Xavier Johnson began shooting into the crowd at a Black Lives Matter march. Green led a group of 60 people onto an abandoned bus for shelter but knew their safety would not last.

“I didn’t know what to do so I prayed to God and he answered. He told me to get everyone off that bus and to find somewhere safe,” Green said.

She led the group to a small hotel, where a friend found and rescued Green and the others. Green’s actions garnered the attention of media and others in Dallas, which led the SMU Women of Color Research Cluster to reach out to her. This organization aims to explore how stories of racism and sexism from colored women can generate discussion and inspire confidence.

It formed after Candice Bledsoe, a professor at SMU, gave a TEDx talk about the power of narratives.

“I’ve often felt my voice could support someone else as they find their own voice,” Bledsoe said.

She wanted to create a place for people to hear about the defeats and successes of others in order to have confidence in their own experiences.

Olinka Green shared more than Bledsoe and the rest of the group imagined. She shocked and inspired them with the assault, tragedies and racism that could not stop her from fighting for her beliefs.