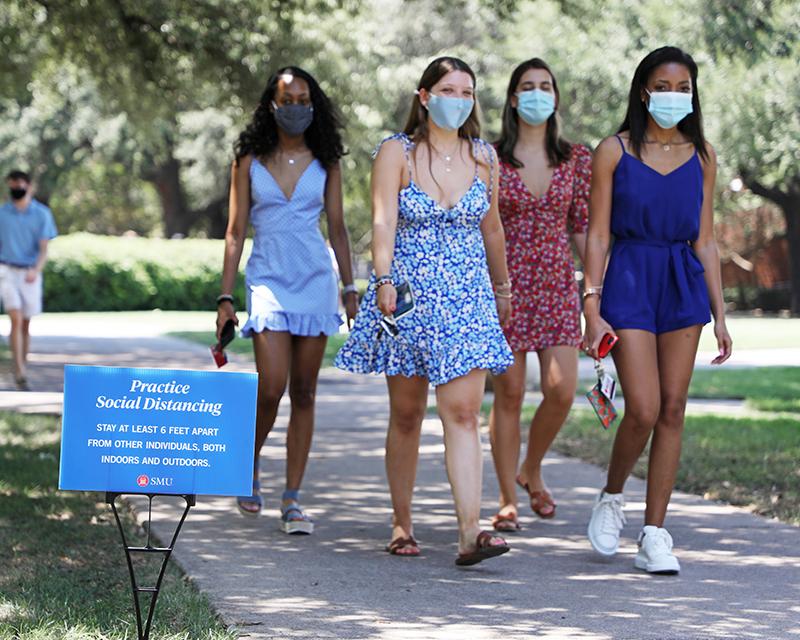 While the coronavirus continues to alter people’s way of living, transfer students are encountering new circumstances at Southern Methodist Univesity (SMU) compared to their previous college institutions. With the hybrid schedule of SMUFlex and some classes held completely online, transfers find difficulty in meeting other students.

“It’s been hard because I don’t have that foundation of people to reach out to,” Cowart said. “It has been difficult at times and has felt lonely, but I try to remind myself there’s this idea that you have to have a friend group, have to be friends with your roommate and have to do everything together. But, that’s not always the case, and that’s totally fine.”

The change of atmosphere and new learning format have led students to understand challenges, which may arise this fall. However, many transfers continue to live on campus despite setbacks.

Liam Amado is a second-year student who transferred from the University of St. Thomas in Houston and is majoring in business. He is living on campus because he says he did not have the experience of living away from his parents at his previous school. While he is trying to get involved in campus organizations, he says his experience so far is different.

“I’ve met a couple of people, but it’s obviously not the same, if we weren’t having the virus,” Amado said. “Because of COVID-19, it’s been hard to meet a lot of people. Naturally, you just meet people in college, but because of that, it has been a challenge.”

He is hopeful despite other adjustments, which may come along the way, as the academic school year progresses.

“A lot of people are kind of scared to talk to each other because of all that’s going on, but overtime, I think things will get easier,” Amado said.

Celine Vu is a third-year student majoring in fashion media who transferred from Tarrant County College. She says most of her expectations from SMU as a new student were met. In the summer, Vu was part of the Connect Institute, hosted by the Office of Social Change and Intercultural Engagement.

“I thought SMU did great in reaching out to students by hosting a variety of virtual events specifically for transfer students over the summer,” Vu said. “I’m generally a shy person, so by getting involved in events and student organizations, such as this, I was able to get out of my comfort zone.”

Cowart who is under the Meadows school also shared similar sentiments regarding her time as a new Mustang thus far.

“I’ve been really happy and surprised with the classes that I’m taking and the kind of people and professors I’ve been with,” Cowart said. “I’ve been overwhelmed with joy and surprised with how amazing it is here. I along with another person are the only two transfer students in the theater department, and it’s as if nothing has ever happened.

“It has always felt like we’ve been here, and we weren’t the new people trying to figure things out.”

Regardless of all the uncertainties, which emerge due to the pandemic, the effort to aim for a successful school year remains. The shift from classroom to remote learning has led students to come across and adapt to wider experiences.

“Although I have experiences with online classes before, I’ve never done a remote group project,” Vu said. “I guess I would have to figure out a way to improve my communication skills and interpersonal skills. At the end of the day, we are all learning to accept this reality as the new normal.”