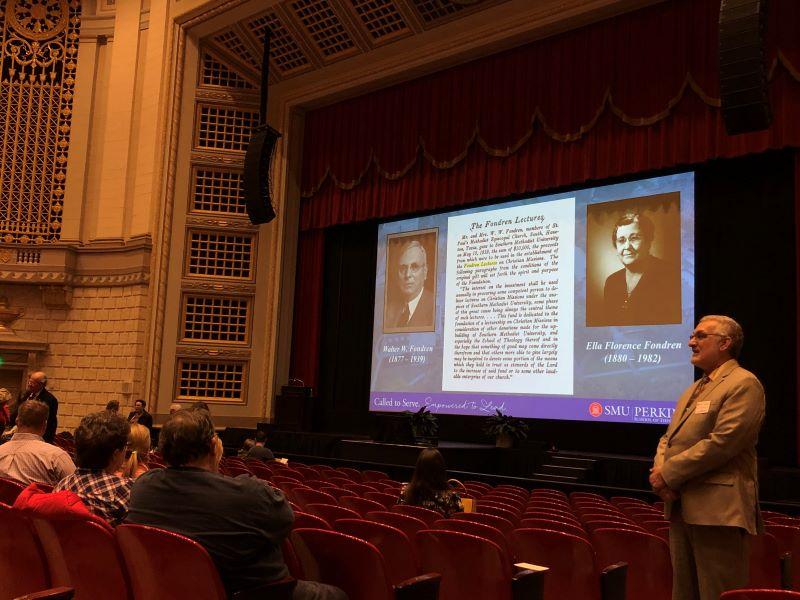 A travel writer and TV host emphasized the value of travel as a tool for understanding the world and called for a reevaluation of American institutions at a lecture on Monday evening at McFarlin Auditorium.

“The mark of a good trip is how many people you meet,” Rick Steves of Rick Steves’ Europe said. “If my own trip isn’t going great, it’s because I’m not meeting enough people.”

The lecture, entitled “Travel as a Spiritual Act” elaborated upon many of the ideas presented in Steves’ books and TV shows, such as connecting with the locals.

Steves discussed how Americans must be willing to learn from different perspectives while they travel, citing his trip to Iran.

“Everything I knew about Iran I learned from Ted Koppel,” Steves said. “How much thought do we give to other people’s baggage?”

He also spent time examining how European society treats issues such as prostitution, marijuana and addiction.

For some attendees, including two-time Steves tour user Joanna Dossman, this was a slight departure from how they had previously viewed Steves.

“His political thoughts regarding travel were a lot more poignant tonight,” Dossman said. “It was really more about purpose, and that’s really why we were here, to hear more about spiritual or political purpose.”

Others saw it as completely in line with his past work.

“It was not in the least bit political. It was all human,” attendee Todd Porter said. “The extent to which we want to make that political is a big, big problem.”

Steves encouraged people to learn more about America by leaving it, something his fans have embraced on their own travels.

Steves advocated for an elimination of extreme poverty, which specifically concerns people living on less than $2 a day.

“I think a thing that I thought was interesting was his framing of developmental work as an investment in security and economic growth,” Porter said.

Steves also advocated for working immigrants and female empowerment to applause from the audience.

The lecture was a part of the Perkins 2019 Fall Convocation, which Steves used to connect his travels to his Lutheran faith.

The audience was full of long-time Steves fans, and many stayed for an autograph and selfie session after the lecture.

“We watched Rick Steves’ documentaries for a while, because we travel a lot,” senior Grace Stinson said. “Before we went to Italy on the Mediterranean cruise, I think I watched his thing on Florence, so I had a little bit of background on that.”

“To get off the beaten path, that’s what he’s inspired me to do,” attendee Anissa Stinson said. “It was definitely he who encouraged me to not be afraid.”