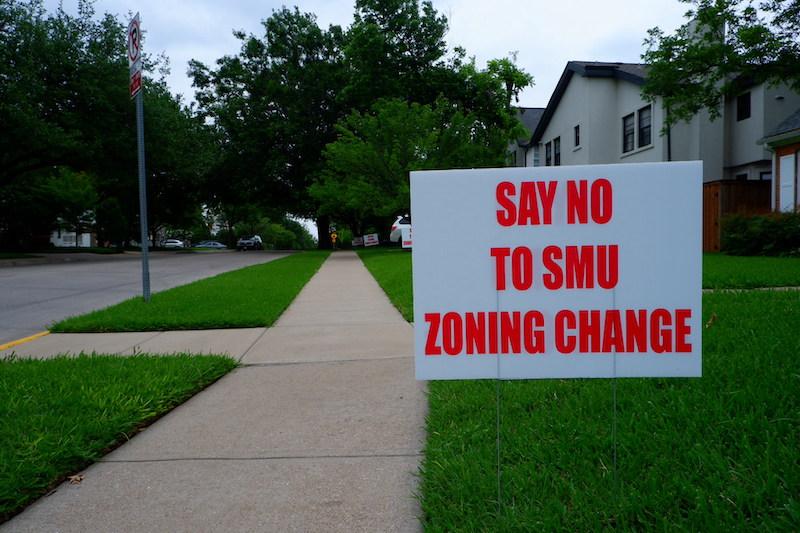 SMU’s zoning change request for a new graduate school complex has prompted a wave of University Park residents neighboring the campus to just “Say No to SMU Zoning”. Numerous signs against the project line the residential streets around the university, especially near the northeastern edge of campus.

SMU plans to build the new four-story Moody School of Graduate and Advanced Studies on the site of the commuter parking lot at the intersection of Airline Road , University Boulevard and McFarlin Boulevard. The project also includes the construction of a surface parking lot east of the new building at the intersection of Dublin Street, University Boulevard and McFarlin Boulevard.

SMU requested a change in zoning to construct the building and parking lot, which was approved May 11 by the University Park Planning and Zoning Commission to be reviewed by the city of University Park. The development would require that numerous homes adjacent to the university be razed in the process.

SMU’s plan “creates a replacement [surface] parking lot east of the new building on land owned by SMU where 28 rental residences currently exist. The new parking area will add an additional 114 spaces to the current parking capacity in the area,” said SMU Chief Architect and Associate Vice President of Facilities Planning and Management Michael Molina in an email statement to The Daily Campus.

Neighbors say they are concerned about increased traffic, air and noise pollution according to a Change.org petition by University Park resident Banu Bilhan. A potential solution, according to the petition’s supporters, would be for SMU to make the area a green space with underground parking. University Park resident Mike Joy believes that a surface parking lot would be “a waste of an incredible asset” for SMU and the community.

“We want them to think big – we don’t want more bricks and more concrete,” Joy, who has lived steps away from campus on University Boulevard since 1989, said. “SMU has been politely listening [to University Park residents], but not doing anything. They’ve given us almost nothing.”

SMU modified their original zoning plan in April to reduce the surface parking lot by 80 spaces and increase the amount of surrounding green space, according to Park Cities People. Molina also says that the current plan is in line with both SMU’s and Universtiy Park city council’s aesthetics and planning principles, while offering opportunity for campus’s future growth.

“Underground parking is cost prohibitive, and does not provide the flexibility that might be needed for future strategic growth of the campus,” Molina said. “The University has worked carefully to ensure the building, parking lot and landscaping match the beauty of our campus and integrate key planning principles and goals from the City’s Centennial Master Plan. The plan features a green space buffer zone with large canopy trees, dense hedging, a tall masonry wall, park seating and pedestrian walk lighting between the parking area and Dublin Street.”

Joy and many other residents say they remain firmly opposed to the project. Joy says that while dozens of citizens have spoken against SMU’s plan at city council meetings, “not a single person” has spoken in favor. Joy also says that he and his neighbors don’t find it credible that SMU is able to build several multi-level parking garages, but doesn’t have the funds to build a single level of underground parking for the 110 parking spaces the campus needs.

“We fight them every time, and every time we lose. We feel like city council has been representing SMU, not us,” Joy said of previous zoning change conflicts that have occurred between SMU and the neighborhood over the past 30 years. “But this is different, because it’s the first time they’re building on residential land – wholesale coming right into our neighborhood.”

SMU hopes that the construction of Moody Hall will enhance the educational environment for Ph.D. students as well as increase its national standing as a research university. Construction on the rezoned area is scheduled to begin July 1, when the rental residences on the future parking lot will be razed. Tenants were given one-year notice about the plans last June, and fewer than five residences are currently occupied according to SMU.

Whether construction continues as scheduled will depend on the outcome of a city council meeting on Tuesday, June 15, where the development plans will be discussed.