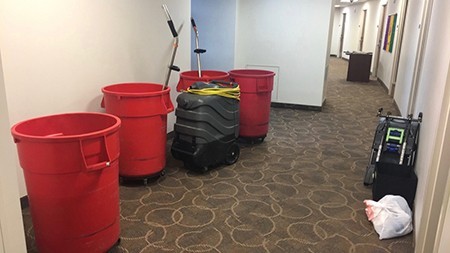 Sprinkler pipe breakage in Ware and Armstrong Commons caused flooding March 9. This is one of several floods in the dorms this semester.

| RELATED: Flooding in Armstrong Commons calls for evacuation of residents

“There are probably about five rooms with damage in Ware,” Shew Holland said. “Armstrong had no rooms damaged, just some common areas.”

Shew Holland confirmed that the sprinkler pipe breakage in Armstrong Commons was not the same one that broke earlier this semester, however it is the same situation. The Office of Risk Management tries to determine the damage as quickly as they can.

“We try to get everything dry cleaned and then asses any other damages and then work with the students to resolve it or replace it,” Shew Holland said.

Ware resident Katelynn Moriarty was completely surprised by the flood.

“I was just sitting in my room then I hoped off my bed and I landed in still water. It was kind of a panic, throwing stuff onto my bed, trying to get stuff out of the way,” Moriarty said.

Moriarty noticed the water in the afternoon, however she suspects the flooding began earlier than that.

“It was 2:30 or 3 p.m. when I noticed it, but I think it started a lot earlier than that because the rooms next door to us were completely flooded,” Moriarty said.

She is grateful that she was in her room during the flood.

“I’m happy that I was in my room, because otherwise I feel like a lot of my stuff would have been damaged,” Moriarty said.

The Daily Campus will update this story as more information is made available.