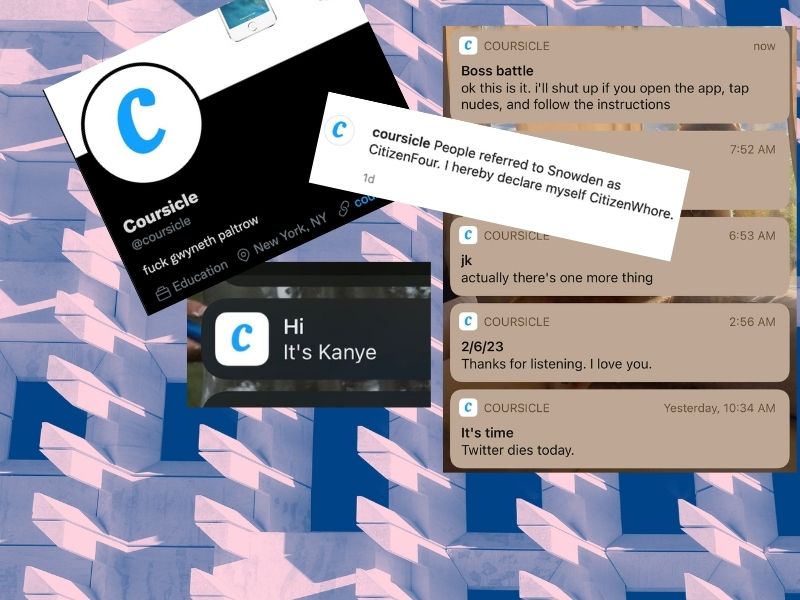 If your Coursicle notifications have been unusually focused on receiving nudes, you weren’t hacked – and you’re far from alone.

Those looking for classes on the popular course-building website Coursicle have encountered something a little different this past week. For many, the first signs of trouble began Feb. 7 when Coursicle app users began receiving cryptic messages of “Twitter dies today” or “Hi, It’s Kanye” rather than the usual push notifications of class openings or schedule changes.

“I got one like two days ago and it said, like ‘I want to see Zendaya nude’ or like ‘don’t be a coward, it’s time for Zendaya nudes,’” SMU junior Josh Hascall said. “I thought I had gotten hacked, or the guy had got hacked, is what happened. And then I saw an article that said the founder was just blasting stuff out on the app…I got a couple more notifications, but then they stopped.”

As odd as the messages were, they were but brief previews into a much deeper, more public saga that involve a breakup, a startup, and what some are speculating to be a manic episode on the part of Coursicle’s co-founder Joe Puccio.

Coursicle promises easier class registration and schedule-building for students at over 900 colleges, including SMU. “[A]bout 1 million people come to Coursicle every month” according to a tweet on Coursicle’s Twitter. Puccio co-founded the site in 2016 alongside his then-girlfriend Tara Aida after graduating from UNC Chapel Hill with degrees in math and computer science.

However, between Feb. 7 and 10 the Coursicle website instead linked back to Puccio’s personal blog with “essays” and “ideas” dated as far back as 2003. In his most recent posts under “Notes” Puccio shares his fears of being in a psychosis, the breakup of his and Aida’s 10-year relationship, and his plans to use Coursicle to end capitalism. One blog post titled “Cancel Culture” dated Wednesday, Feb. 9, links to a 244-page document with screenshots and text outlining the demise of Puccio and Aida’s relationship.

“I’m sitting here talking to 500,000 people through an app I had to make over 10 years crying for help because I’m afraid that I’m in a psychosis,” Puccio wrote in a post Thursday. “And what does Twitter do when I speak my truth? They ban me for 7 days. As of this writing, my name isn’t coming up when you search ‘Joe Puccio’ on Google. I imagine Apple will soon take away my ability to send push notifications and I’ll lose the ability to contact you.”

The Coursicle site returned to normal Thursday afternoon. However, Puccio has continued to interact with users on Reddit under his username monstermac77 as well as on Coursicle’s Instagram.

“I’m doing much better now and I wanted to use what I went through to raise awareness in a very, very real way to everyone going through mental health stuff, especially those in college,” Puccio wrote on Reddit Wednesday. “In order to draw attention to an issue, I believe you need to be provocative, you need to stand out among the rest. That’s how you do effective marketing. Yes, it’ll piss some people off, but everything worth doing does.”

Mental health awareness and outreach is referenced multiple times on Coursicle platforms and in Puccio’s personal writings. Puccio writes on his LinkedIn that one of Coursicle’s missions is to provide a “safe community” for those experiencing mental illness. The company’s Instagram header also currently reads “colleges: first underreporting sexual assaults on campus, now underreporting suicides?”

Despite this purported clarity of purpose, Puccio’s posts on his blog and Coursicle’s social media are still laden with references to turmoil with his mental health, ownership of Coursicle and his personal relationships.

In a post from Dec. 5, 2021 Puccio writes an email to the writer and journalist David Lipsky where he claims that his ex-girlfriend Aida was emotionally abusive. Puccio also outlines how Aida had just relinquished her 51% equity stake in Coursicle that week to attend law school, granting Puccio full control of the company. Puccio, who is currently 27, has also caused alarm for his relationship with an 18-year-old named Annabelle, who he claims he met Sept. 7, 2021. However, in a now-redacted post dated Feb. 10, Puccio appears to have since ended the relationship.

This just in people. Our former co-founder has just sold her 51% equity stake in Coursicle for $100,000. pic.twitter.com/tsFmfKEMsb

Coursicle users are still uncertain about the future of the website or its founder. Notifications seem to have stopped and the website has since returned to its original functionality. However, Coursicle has not released an official statement on the changes or why they have occurred.

“I’ll probably just keep the app and see if he says anything else,” Hascall said. “But I guess, maybe I’ll delete it if he starts spamming me or something…If I had gotten, like, 15 notifications about nudes or whatever I probably would have deleted the app. ”

The Daily Campus has reached out to Tara Aida and Joe Puccio. At the time of publication, neither have responded to requests for a comment.