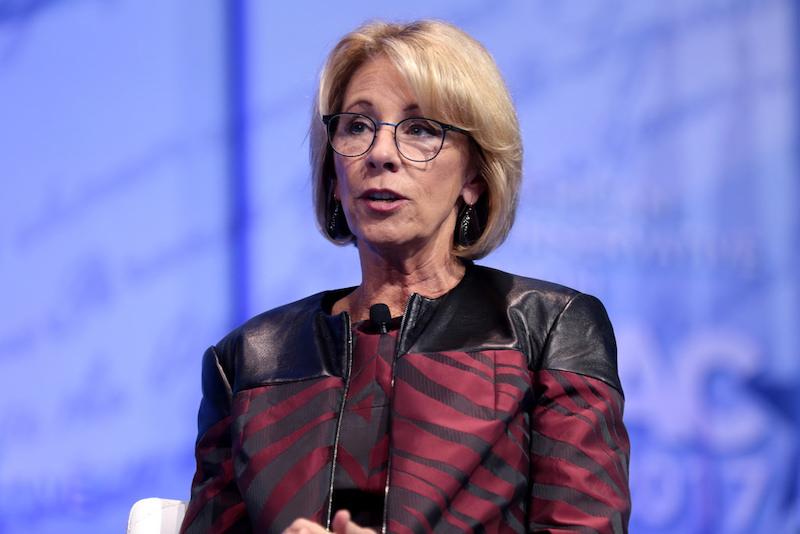 Betsy DeVos, the U.S. Secretary of Education, is working to change Title IX. Title IX is a federal law that prohibits discrimination on the basis of sex in a federally funded school or education program.

“No person in the United States shall, on the basis of sex, be excluded from participation in, be denied the benefits of, or be subjected to discrimination under any education program or activity receiving Federal financial assistance.”

Title IX is a civil rights law that encompasses a lot, including the participation of women in athletics as well as reporting sexual assault.

Something worrisome, to put it briefly.

Here's how Betsy DeVos' Title IX plan hurts survivors of campus sexual assault, from someone who knows firsthand what this grueling process is like pic.twitter.com/fyT3Y6NMt5

In that vein, the following changes are being made to the reporting procedures, as described by Vox’s Anna North and survivor Jess Davidson on NowThis news (above):

-The new rules shift liability off schools for addressing harassment. Schools can choose their standard of evidence as either a ‘preponderance of evidence’ or ‘clear and convincing evidence,’ the latter more difficult on the survivor reporting assault. There is a fear schools will become more lax with addressing sexual assault, or avoid addressing sexual assault altogether. Drew University in Madison, New Jersey fired its Title IX coordinator over Winter Break.

-The new rules allow victims to be cross-examined by their attacker or someone their attacker chooses. This can be extremely traumatizing for the victim.

“I think that Betsy DeVos’ new changes to Title IX are focused on giving more rights to the accused. I definitely believe that there should be appropriate rights for both the accused and the accuser, but her proposed changes may hinder victims from coming forward with their stories,” Noelle Gushard, president of SMU’s Not on My Campus, said.

In summary, DeVos’ intended changes will narrow the definition of sexual violence, thereby making it harder or impossible for those affected by sexual violence to seek justice.

DeVos’ intended changes will narrow the definition of sexual violence, thereby making it harder or impossible for those affected by sexual violence to seek justice.

“I believe that DeVos’ proposed changes to the definition of sexual harassment are dangerous. In the wake of the #MeToo movement and extensive research showing the endemic nature of sexual violence on college campuses, we should be increasing protections for survivors, not rolling them back,” Lamisa Mustafa, Vice President of SMU’s Feminist Equality Movement, said.

According to The Hunting Ground, an award-winning documentary on campus rape culture available on Netflix, more than 16 percent of college women are sexually assaulted while attending university. 88 percent of women sexually assaulted on campus do not report. Sexual assault affects men as well, but so few men report that it is difficult to study this.

The time for submitting comments on this proposed Title IX change ended on Jan. 30. Now, the Department of Education is reviewing the over 96,000 comments submitted to them, according to The Atlantic.

What resources are there for survivors at SMU?

You can report through SMU’s Title IX office, which is under the Office of Institutional Access and Equity at SMU. You can direct questions to Samantha Thomas, SMU’s Title IX coordinator. To report, you fill out this form and turn it in either in-person or through email at accessequity@smu.edu.

Please note, if you do go to talk to them, you are allowed to bring someone with you as a witness through the proceedings. Survivors have rights through Title IX case reporting. You should also take notes and record what they tell you and your interactions with the office.

The center’s office is on the third floor of Hughes-Trigg. The center also has a ‘What to do in Case of Emergency’ page on their website.

If you would like to seek counseling, our school’s health center provides that. This is the portal to schedule an appointment.

“Even at SMU, where spaces exist for people to report their experiences and seek help, survivors have voiced frustration at complex bureaucratic processes and inadequate support. They’ve felt that more could have been done to bring some sort of justice to their situations,” Mustafa said. “We, the SMU community, still have work to do.”

“Even at SMU, where spaces exist for people to report their experiences and seek help, survivors have voiced frustration at complex bureaucratic processes and inadequate support.”

Also, when the annual Campus Climate survey comes to your email inboxes every April, consider answering it. It is completely anonymous, and SMU does use it to gauge the degree to which our campus is affected by sexual violence. SMU is one of many schools across the nation that administer the Campus Climate survey.

What resources are in the Dallas area?

There is a sexual assault nurse examiner in Texas Presbyterian Hospital who is specially trained to serve those affected by sexual violence. You can request to see the SANE nurse when you go to Texas Presbyterian’s ER.

There is also the Dallas Area Rape Crisis Center (DARCC.) DARCC’s website has a full list of their resources. You can call a 24/7 hotline for information, advocacy, emotional support and referrals. Their number is 972-641-7273.

DARCC also has medical advocates who can support you in person at Texas Health Presbyterian Hospital. The ER nurse will dispatch a trained DARCC representative to accompany you through the process. The DARCC representative will answer your questions and is trained to provide emotional support.

DARCC also provides legal advocacy who will accompany you to the police or courthouse.

Here is a list of SMU, regional, and national resources available to you.