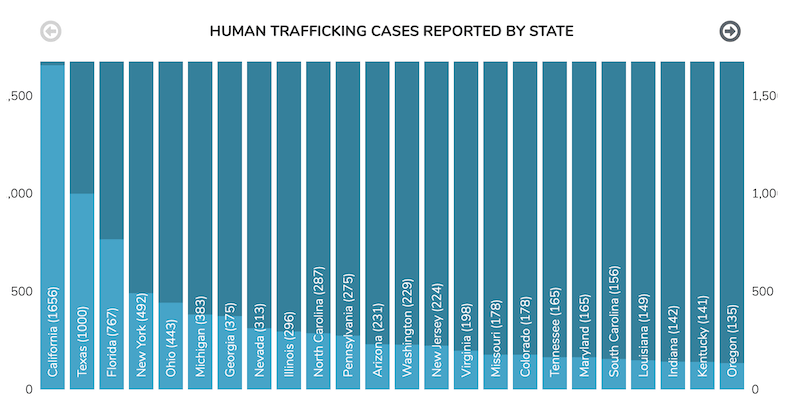 John has a nine-to-five job and, on the weekends, he watches his kids play soccer. He goes to church and meets his wife for happy hour. He is educated and financially stable. His family, neighbors, and coworkers think he’s a “great guy.” What they don’t know is, John uses social networking apps to pay for underage girls that are available during his lunch break. He meets the supplier at an apartment in the suburbs, or north of the city maybe. Someplace far away, so he feels more comfortable. He pays for sex, drives back to work, and at the end of the day goes home to his wife and kids. This scenario is far too common.

Just like any other industry, sex trafficking and prostitution are market-driven and there’s a strong demand. There will always be exceptions, but victims and police reports show the primary clients of sex trafficking are men who come from all classes; educated, working, middle, and wealthy. They are both young and older men, and have the financial means to buy sex. They have families. These men are referred to as “Johns.” Johns, as it turns out, are just about anybody. “It’s the people you would least expect,” says Jim Walters Chief of Police for Southern Methodist University.

Human trafficking in the United States is the 2nd most profitable criminal activity behind drug trafficking according to UNICEF. North Texas is known to be a hub for sex trafficking. According to the National Human Trafficking Hotline, Texas ranks second in the country only behind California; and in Texas, Dallas is the second city with the greatest number of cases just behind Houston. According to a research report done by The Urban Institute, commissioned by the Department of Justice, in Dallas alone, sex trafficking generates $99 million in profits annually. In North Texas, police, activists, and educators understand the crisis North Texas is facing and are working to stop this attack on the vulnerable.

According to the Victims of Trafficking and Violence Protection Act of 2000, federal legislation prohibits sex trafficking, defining it as, “recruitment, harboring, transportation, provision, or obtaining of a person for the purpose of a commercial sex act,” and goes further by explaining severe forms of sex trafficking as, “a commercial sex act [that] is induced by force, fraud, or coercion, or in which the person induced to perform such act has not attained 18 years of age.”

The Chief of Police at SMU, Jim Walters, has extensive experience and knowledge in the field of sex trafficking. While his first job and priorities are at SMU, he also works as a consultant with the Department of Justice. His focus is identifying people under 18 that are missing, exploited and trafficked. Walters works with this unit and helps the DOJ develop their national training.

“There is a misconception that sex trafficking and exploitations only takes place in impoverished communities . . . but it does affect every community and every walk of life.”

Walters explained how victims of sex trafficking can be anyone and do not have to be moved from city to city or have a cash exchange. The exchange could be “money, exchange of goods, or for the pleasure of the person receiving.” However, the reward does not go to the person being trafficked; it goes to their trafficker who is forcing them to perform these exchanges.

The purchasing of commercial sex is illegal in the state of Texas no matter the age of the parties involved. In Texas, buying sex is at a minimum a misdemeanor crime and is automatically a felony if the victim is a minor.

Many officers and prosecutors target the women who are selling sex. With the hopes of discouraging prostitution and trafficking by arresting them. Walters exposes this problematic way of thinking.

“If you just go after the women that are providing sex, there will always be a replacement. But when you make it so that it’s so steep that you cannot afford to get caught, or that the repercussions are going to come down on you as the buyer, then you can dissuade people from doing it.”

In an interview by Nicholas Kristof, “A Path Appears,” Sherriff Thomas J. Dart shares a similar idea to Walters’ about targeting the Johns. Dart helped to start National Johns’ Day. This day is centered on bringing the attention to focusing exclusively on arresting the Johns.

While there is a possibility of jail time, if it is a first-time arrest, it still costs less than a drunk driving arrest. In Walters’ opinion and experience, there’s no such thing as a one-time John, “they will keep doing it until they are caught, and many are never caught.”

In order to raise awareness among men and boys in the Dallas community, there is an NFNL Men’s Advocacy Group (MAG). The organization is made up of volunteers, who focus on raising awareness in boys and men about sex trafficking and sexual exploitation. MAG volunteers have started a new project called the “ManKINDness Project,” where they go out and talk to local high schools to discuss masculinity, how they view girls and women, and how pornography affects the brain and increases the likelihood an adult will pay for sex. MAG volunteers also fund community bus tours. During these bus tours, while offering firsthand insight to different sex trafficking cases that have been solved, experts discuss the educational and cultural reality of sex trafficking in Dallas.

Brazeal goes further by saying, “some are where you would assume that would happen, and some are not. They are close to neighborhoods and businesses.” MAG focuses on conversation, education, and volunteering.

Brazeal describes MAG as “a group of men… interested in being a part of this solution around addressing the demand side of things, creating awareness around the social norm that has been created around paying for sex in our society, and how that actually does contribute to the rates of sex trafficking increasing.”

“For a long time, the focus has been really on criminalizing the women who are being trafficked, so the victims. And I think we’ve seen that that has been limited at best in terms of success.”

Klein shared how he heard someone compare buying sex to a transaction at a supermarket.

He asked the person, “Why didn’t you think about this person who could’ve been underage?” They responded, “I don’t want to know how the sausage is made.”

According to Klein, the buyer does not want to know the person’s history, “they don’t see that person as a person anymore, it’s a thing that is designed to give them pleasure.”

Reiterating what NFNL’s MAG focuses on, Klein believes there is a need to talk about healthy sexual ethics. The rise of pornography, which is often hidden in people’s lives, can create psychological and problematic views on sex; “again, it’s a way of not seeing people as people.”

Klein believes he is able to make an impact, by training students who can become leaders in the field and liaisons with community organizations.

“I think where our expertise plays in, is with the training of students who can become leaders in the field and also liaising with community organizations who are doing the work and are focused on that.”

The SMU Embrey Human Rights Program is doing just that. Two years ago, the program hosted one of the largest summits on human trafficking in North Texas. Students, community members, police, and activists walked away with action plans for combating trafficking in the local community.

“It was kind of like a spark for them to come together with experts to think about what does this region really need and what can we practically do to considering the resources we have at hand.”

Sex trafficking is a worldwide issue. An issue that cannot be fixed overnight. However, the solution to advocates in the field is clear: without demand, there is no need for supply. Stopping Johns from becoming Johns is a way we can all help.

Experts say promoting healthy conversation about sex, so boys and men think of women as people, rather than as sexual gratification tools, is the most effective way to stop sex trafficking.

To get more involved in stopping the demand, reach out to the following programs: