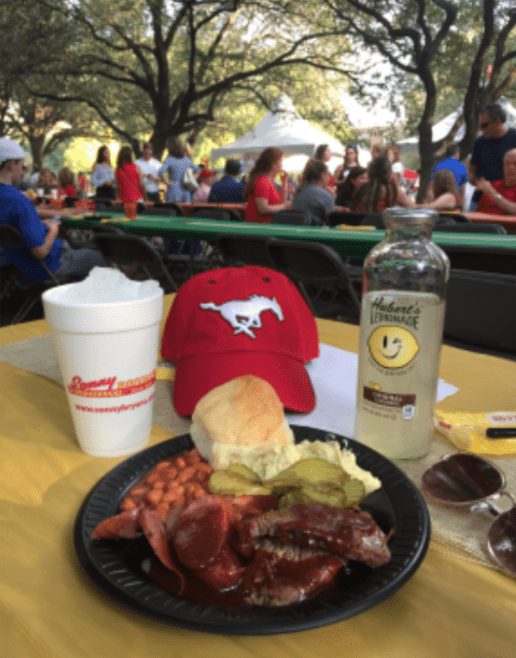 Parents flew in from all over the country to visit their students on Sept. 22-24 for SMU’s annual Parents Weekend. This weekend held the first opportunity for new Mustangs to reunite with their families after a month apart.

Student Foundation themed the weekend “Wild About SMU” and put on a variety of activities for visiting parents and their students. On Saturday’s game day against Arkansas State, parents of new students were introduced to boulevarding.

Dads in Vineyard Vines polo shirts alongside mothers holding Tory Burch bags bobbed around behind their bashful freshman down the paths of Dallas Hall. Hundreds of families gathered on Clements Hall South Lawn for the SF Boulevard barbecue catered by Sonny Bryan’s Smokehouse.

The rite of passage of moving out to college can prove a positive growing experience or a difficult struggle for teenagers. Adjusting to managing larger workloads, learning to do their own laundry and adapting to a new social environment proves overwhelming to many.

Worlds collided as young adults shared these new lives with parents on the Boulevard. For some, seeing Mom and Dad again soothed homesickness and stress that came with moving away from home. For others, though, watching parents mingle with friends they met at fraternity parties caused anxiety.

The Boulevard barbecue hosted a wide variety of family dynamics. With more than half of SMU’s undergraduate population coming from out of state, a large portion of parents got introduced to real southern barbecue and 96-degree weather, with humidity.

Regardless, southern California resident Carolyn Dittrick said her and her husband’s visit “was wonderful in that it allowed [them] to see [their] daughter in her new environment happy, productive and excited about her future.”

The barbecue served as SF’s wrap-up event of the weekend. Previously in the weekend, the organization held their 42nd annual talent show highlighting student dancers and singers.

SF had also partnered with Mom’s Club to host a family luncheon, where President R. Gerald Turner and SF board members were in attendance. After the barbecue ended, families headed over to the Gerald J. Ford Stadium to watch the football game.

Braving the heat appeared worth it when the Mustangs beat Arkansas’ Red Wolves with a final score of 44-21. Parents eagerly pulled out their phones to film Peruna run across the field at each touchdown. After the game, many teary-eyed goodbyes took place outside residential halls as parents left for home.