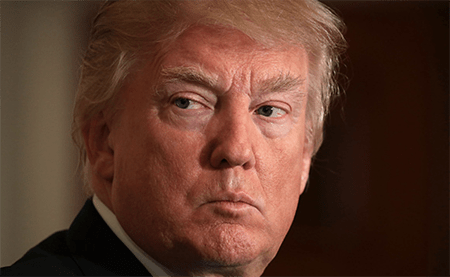 April 29 marks the end of President Trump’s first 100 days in office. Immediately after the election, many people felt sure that Trump’s presidency would bring about the onset of WWIII, a loss of all function in the government and the destruction of civil rights.

But after 100 days, we are still here. WWIII hasn’t started, no one has lost any rights or health coverage and things have generally seemed to continue as usual in our American bubble. While critics might say that is setting the bar low and that there is still more than enough time left for things to go off of the rails, at least Trump’s presidency has not been the disaster that many skeptics feared.

However, the lack of disasters has not convinced the general public to approve of Trump. AOL reports that Trump’s approval rating is reaching historic lows.

Trump was quick to respond to call the polls “fake news,” attempting to discredit the media while gloating about his victory.

While some may see this as the beginning of the end for Trump, these numbers are not all that surprising — and can be saved. There are major swaths of the country who are never going to support Trump no matter what, and that hasn’t changed. And the lack of action, or perceived lack productivity, out of Trump’s first 100 days has likely caused some supporters to change the way that they responded in the polls.

If Trump can deliver his budget and some form of change in healthcare, these numbers may rise as Trump supporters return to the approval side.

But Trump may lose bigger at the end of this week. Yahoo reports that on April 29 the “government could shut down without a budget deal” and this week will be difficult for Trump.

A government shutdown would be a disaster for Trump and the Republicans and should be avoided at all costs – even if they cannot get everything they promised their constituents on the budget all at once.

The result of the budget and whatever else Trump can pass this week will likely cause the approval numbers to move in analysis and news stories looking back on the his first 100 days in office.

If Trump has a successful week, things may be headed in a better direction for him than they have been thus far. However, if nothing gets done or worse if the government shuts down, then Trump’s presidency could be on its way to nonexistence.

But it seems the world will indeed survive the Trump presidency: we’ve made it this far – only 1,360 days to go.