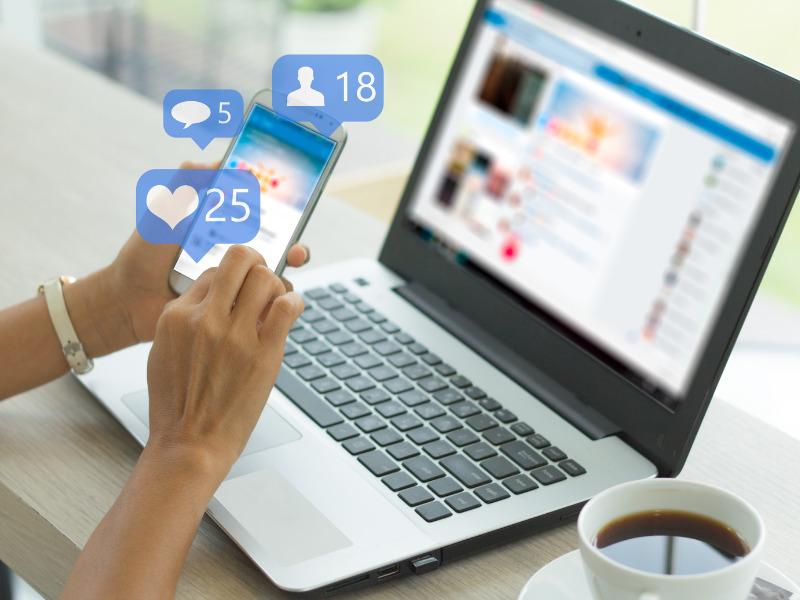 This essay was first published in the Summer 2022 issue of the Bush Center’s opinion journal, The Catalyst, which explored how Americans can create a more perfect union.

There is no denying that America has become increasingly polarized over the last four decades. Blame is loosely placed on everything from divisive leaders to strong associations of identity with a political party. Social media platforms are especially noted for driving the separation between political parties.

Still, change is possible. Understanding how these platforms drive polarization and altering the way we use and view social media can bring about more civil discourse on the internet and close the gap in American politics.

Long-term trends in polarization show that the divide in American political parties is nothing new. A 2017 report from the National Bureau of Economic Research states that 71% of voters in 1972 voted for the same party in the presidential and House elections. In 2012, that number shot up to 90%.

To understand just how divided America is, look at the data from a 2021 article from Pew Research Center’s Trust Magazine. Across 14 countries surveyed by Pew, the United States had a 47% gap between those who supported and did not support the governing party, the largest gap of those surveyed. There is no doubt these numbers have increased in years since.

As social media has become increasingly prevalent in our everyday lives, it has incidentally become a driver of the increased rate of polarization. Yet, this doesn’t mean that social media is inherently evil or corrupt.

Interestingly, the same NBER report found that those who use social media the least, particularly those 75 and older, have become more politically polarized as compared to younger, more social media-active respondents aged 18-39. On the surface, this data would make one believe that social media actually reduces polarization. However, the way each generation navigates social media is a significant factor in what drives older generations farther right or left after internet use.

Navigating social media effectively requires media literacy, or the ability to analyze and assess media messages. The less media literate a person is, the more likely they can be persuaded by false or incorrect messages.

As a senior journalism major, much of my studies have been dedicated to media literacy. I’ve taken courses entirely dedicated to communication law and media messaging. I have also consistently had professors instill in us the importance of identifying reputable and reliable information out of the massive amounts of content on the internet. Even in the early 2000s, when I was in elementary school and Facebook was only for college students, I learned the importance of knowing the difference between a reliable and unreliable source on the internet.

For those with less experience on social media platforms, particularly those whose education concluded before the internet was widely used – or used at all – the fundamental ability to navigate through information available online is limited. This makes it considerably easier to take information at face value, regardless of the reliability or validity of the source.

We should all know that misinformation online runs rampant. Bots can be programmed to spam sites with biased information. Russia has used fake “sock puppet” accounts to spread misinformation about the war in Ukraine. And with every step in the right direction to combat false information, another technological development makes deciphering false messages harder.

This is where media literacy becomes a necessity in navigating the digital landscape. In my journalism classes, peers share a common skepticism of information seen on Twitter, TikTok, Instagram, and, especially, Facebook. Because of our media education and social media experience, we tend to see information as being guilty-until-proven-innocent in terms of being biased, no matter how many views or shares the post or article has. Virality does not equate to validity.

As I noted earlier, social media platforms are not, in themselves, corrupt entities. Through their ability to connect people around the world, movements like #MeToo and #BlackLivesMatter have spread awareness for issues from sexual assault to racial injustice on a global scale.

However, their algorithms create political echo chambers. These algorithms, at their best, are designed to maximize engagement. When social networking sites began to spring up across the internet, software engineers had to develop a way to keep users engaged with their own platform instead of their competitors’. To do this, sites from Facebook and Instagram to Pinterest and Twitter switched from a timeline-based feed, where content is shown to a user based on when the content was posted, to a relevancy algorithm.

Unlike their chronological predecessors, relevancy algorithms determine posts in a feed based on a user’s interests and likes. This is why, for example, after looking for recipes on Pinterest, cooking content will continue to be recommended for months. When a user engages with political content, the algorithm will suggest content that appeals to their views and opinions, placing them in a political echo chamber.

The consequences of the echo chamber effect are most clear in its exacerbation of political polarization. In a report on social media and polarization by NYU’s Stern School of Business Center for Business and Human Rights, data shows how these echo chambers, also known as “information cocoons” or “information gerrymandering,” have decreased trust in institutions as well as limited democratic discourse. Because an algorithm is unlikely to recommend a CNN article to an avid Fox viewer, exposure to alternate points of view on social media channels becomes increasingly rare over time.

It is important to note that these effects are not limited to any one social media platform. While Twitter and Facebook are most commonly blamed for driving this divide, Instagram, Snapchat, TikTok, or Reddit, for example, can contribute to this echo chamber.

Breaking out of the echo chamber

So how do we remedy this? How do we break out of this echo chamber?

Instead of abandoning all hope for social media, changing the way we use those online platforms — and view those of the opposite party — can encourage engaging, yet respectful discussion and debate online.

The first thing to note is that we can control what the algorithms bring us. By actively engaging with accounts and posts from different parties or perspectives, a diverse set of opinions will become common in one’s feed.

Intentional internet engagement is the easy part, though. The difficult side of bridging this gap occurs beyond the screen: fighting polarization requires a change of heart. One has to be willing to challenge their biases and listen to the opinions of the other party to begin encouraging open, respectful discussion online.

Productive engagement with others on social media requires mutual respect and understanding with every interaction. After years of malice and division between parties, this requires significant effort.

The final difficult step is changing how we interact on social media platforms. When posting political views, if you choose to do so, be purposeful. Whether it is a tweet, story, post, or video, only share what you know to be true, factual, and are willing to discuss.

Instead of unfollowing those who you disagree with, reach out and be willing to learn their perspective. Goals of persuasion are futile; the key is to discuss, not debate.

Social media can be a tool for unity rather than division. By using these platforms with intention and humility, we can change the way we use social media and begin the slow process of reuniting our divided nation.