Carolyn Barta is professor of practice
in the Journalism Division. She covered
Mayor Jonsson and Dallas City Hall as a
reporter for The Dallas Morning News.

That was the charge given to Dallas citizens 50 years ago by the city’s visionary mayor, J. Erik Jonsson, as he launched the inclusive program, Goals for Dallas, to map out the city’s future.

What kind of city did Dallas want to be? It was only two months after the assassination of President John F. Kennedy, when Dallas had become known as the “city of hate,” that Jonsson became mayor. He set about trying to bring change to a parochial, often intolerant and insular community virtually run by business interests.

Twenty-six community leaders answered his call to establish the citizen-based Goals program that would cut across economic, racial and geographic lines. Then, more than 100,000 residents attended neighborhood meetings to develop dozens of goals in areas ranging from education to transportation to public safety.

Some of the major accomplishments that resulted included DFW Airport, the I.M. Pei-designed City Hall, a new downtown library (named after Jonsson), air conditioned public schools, today’s University of Texas at Dallas, the beginning of the Arts District, more neighborhood parks, and eventually the creation of DART.

But the results weren’t just physical. Goals for Dallas was the first major effort by local leaders to encourage a broader participation by a diverse population in the destiny of Dallas.

In attendance were three generations of leaders: some who were around in the Jonsson days, others who have leadership positions today, and student leaders who will pick up the mantle of public responsibility in the future.

Every table included at least one student leader seated among local luminaries, ranging from Dallas School Supt. Mike Miles to community stalwart Roger Staubach, to local leaders involved in the university. The idea was to re-create the sense of community and foster the diverse dialogue begun in Goals for Dallas.

Mayor Mike Rawlings shared his own goals with those attending – fewer than those in the original Goals program but ones that could be as far-reaching. What’s on Rawlings’ bucket list of priorities?

Much needs to be done. While Dallas has its share of billionaires, 39 percent of the population are asset poor. Rawlings sees a role for churches and the faith-based community, among others. The Maguire Center sees a role for up-and-coming leaders, such as those attending and graduating from SMU.

What about you? Are you going to be engaged in your community? Committed to volunteer work? To giving back? To carrying out the dreams of the present mayor? To setting new goals?

Jonsson said a city is not measured by the height of its buildings or the money in its banks, but by the character and determination of its people.

Posted on February 6th, 2014 by Carolyn Barta
ShareTweetShare on Google+Pin on PinterestSend with WhatsApp 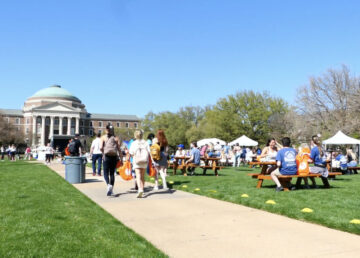 Find out the results of the nail-biting midterm elections.... END_OF_DOCUMENT_TOKEN_TO_BE_REPLACED